Too Much (actually, just right)

It started out with our 2nd 5k - the Pumpkin Push. What a fun race! I was a little nervous about it because we hadn't run 3.2 miles in a few weeks, and with our first 5k we were running that distance 2-3 times each week. But it was totally fine. It helped that we had a lot of people in costume to look at as we ran by (or, as they ran by us, which is a more true statement). It was funny to start out the race, I told Rob that it looked more like we were running from a natural disaster or something. Most of us didn't look like we planned on running that morning - families, people dressed up, and there were just so many of us!

Alicia and my mom were there too, and we saw a couple of friends along the race, which made it that much more fun!

Photos below: a before/after of the four of us - can you tell how wet we got?, an official race photo of Rob - what form! My bandanna is dorky, I know this. It kept my ears warm. 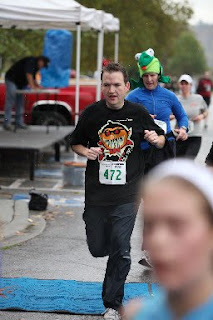 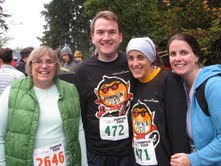 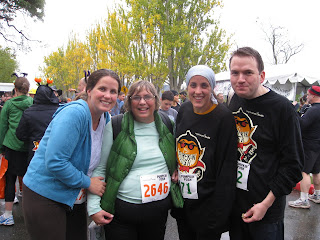 The rest of the afternoon was lazy. And long. See what I mean by a perfect Saturday? Some of what we did:
- watched the week's episode of The Office while eating lunch
- a long grocery shopping trip (including Costco!)
- cleaned the house (lazily)
- watched Friday Night Lights - the first episode of the season!
- hung out a little at the Quigley's
- some other stuff I guess I forgot. I just know I told Rob around 3pm, "I love lazy Saturdays like today," totally forgetting that I had run a race that morning!

That night we went to Vietnamese in the International District and a concert. We go to Vietnamese and concerts relatively often, but these were extra special. Usually we go to Vietnamese to get inexpensive pho or bahn mi. But this place was fancier (fancy to us isn't saying much, but it was a little less hole-in-the-wall than our usual). We ordered something I've never had before and it was just so cozy and warm when outside was dark and wet. Wonderful.

The concert was so super fantastic! Sufjan Stevens - my first time seeing him. I didn't know much of his music, but what I do know I have always loved. A little Rob and Stephanie history - when we first became friends, Rob put a Sufjan album on in my car and asked if I liked his music. I had never heard of him. I later found out it was a "test" of sorts, seeing what my music taste/knowledge was before he decided how he felt about me. Good thing he gave me another chance! I won't write much about the concert, just that 1) he put on an amazing show (new, crazy stuff - listen to one below, great graphics, and a long encore with the favorites), 2) I got to SIT the entire time! and 3) it ended by ELEVEN! I was very happy.