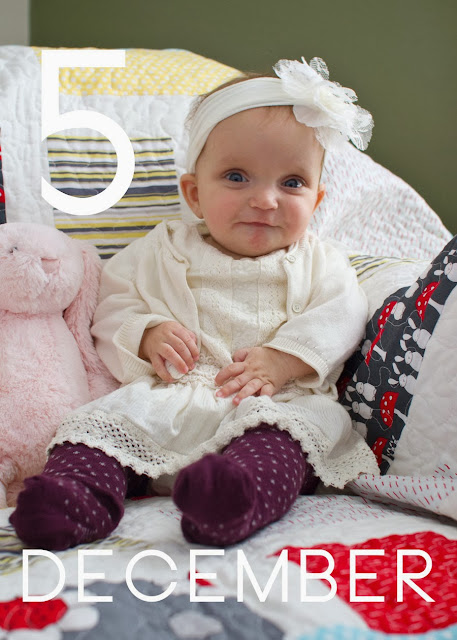 How cute is our June!? She is just all smiles these days. I know I say that every update, but really, she is just so happy. The smiles are now joined by laughter and happy "screeches." I'm starting to see that she may be the extravert I am - getting all her energy by being in the company of a lot of people. Two recent examples of this are when we were on the airplane on the way home to Seattle. She was so happy during the flight, looking at and "talking" to the passengers all around her. As soon as we got off the airplane she broke down, crying and tired for the first time. I also just had a get together with friends that I took her to. It began past her typical bedtime and was almost three hours long. I brought her thinking that she would get tired and I would nurse her to sleep while I visited with my friends. Nope, she was at her happiest the entire three hours and then as we left, being the last to leave (because I'm the extravert like her!) she started crying as soon as that party was over and fell asleep on me on our walk to the car! Silly baby.

Just like our trip at Thanksgiving, we are excited to be home for Christmas for a couple weeks where we can show her off to family and friends and where she can get constant attention. We left when she was only five weeks old, so of course she's a very different baby for them to get to know now.

June is giving me a run for my money in the napping department. Actually, nothing too difficult - just the back-and-forth that I think is common when starting out with sleep-training. It's just so easy to slip into "bad" habits of nursing her all the way to sleep a couple times, then she begins to depend on it, which makes it a struggle to get her to sleep in the first place and also stay asleep. The other problem is just that extravert issue - the world and the people in it are too exciting, she doesn't seem to want to miss it in order to nap!

She's starting to hold onto toys better and manipulate them in order to put them into her mouth. She plays with her Sophie giraffe, a tag blanket, a small plush bunny and an oball (I had to look it up in order to know what it's called). But, like I reported last month, she's still just as happy holding onto and chewing on a burp cloth.

June has suffered her first cold this month. It's been two weeks and running, which seems like a long time. Her cough sounds bad but doesn't wake her up at night, although it does sometimes get in the way of falling asleep.

It's official, she's totally balding (again, I think I report this every month). It's hit an ugly stage, I think, where it's beyond baby balding and in the realm of old-man-who-just-should-just-go-ahead-and-shave-it-off-already.

I feel bad that this is all I have to report on for this new month, but I can't think of anything else to say.