I spend most of my day in the kitchen. That's due to both necessity and preference. In fact, I have a spot that I stand at in my kitchen that could be considered my perch, or maybe even my throne. It's where I lean over my laptop to find and refer to recipes, it's where most of the prep occurs, it's where (unfortunately) I eat most of meals from, and it's where my baby probably goes to first when he's trying to find me.

What I'm saying is: it's about time I post a recipe since finding and using recipes is pretty much my favorite thing to do (it really is a good thing that I enjoy this and other kitchen duties as much as I do).

At the end of this month -I can't believe it's finally June- Rob, Henry and I are flying to Switzerland to spend time with my sister and her husband who live there. One thing on our trip itinerary is to help Monica broaden her recipe repertoire by cooking some of our favorite meals while we're there and teaching her a few cooking tips in the process. The problem she's had and that we'll face is that Switzerland, of course, doesn't have all the food prepared and ready in the way that has become convenient for us American sisters.

I've been on a big enchilada kick lately and thought it was a good meal to share with Monica because it just contains some basic and easy elements (sauce on the bottom, sauce on the top, usually - but not always- cheese, and tortillas filled with.... anything) that she can have fun with. Yes, fun.

I've been testing out the recipes I'm going to make with her - even though I've made them many times. Just so they are super fresh in my mind when we go grocery shopping in Germany (cool!) and finally see what food they have, I'll know better what can be substituted, etc. Today I tested out some homemade enchilada sauce and it was a hit! Actually, we're having it tonight so I don't know that the other eaters will agree for sure. Regardless, I think it tasted much better than canned sauce, which I use but have never even liked very much, and it was so quick and easy to make. I'm just incredibly stoked to find a cheaper, easier, tastier, (slightly) fresher, and less sodium-er alternative to what I had been using before.

I combined a couple recipes (this and this, which are pretty much the same recipe) along with a couple suggestions from the comments on the blogs where I found the recipes. Comments are the most useful aspect of getting recipes off cooking blogs, IMO. Oh, and sorry, no pictures. I love online recipes with pictures, but you don't need them for this recipe anyway.

2-3 Tbl. chili powder
1 tsp. cumin
1/2 tsp. garlic powder
1/4 tsp. cinnamon (optional - I like the slight "mole-like" taste the cinnamon adds)
2 Tbl. flour (in case you're wondering, one of my reference recipes said substituting with a GF flour is okay)
1/2 tsp salt (you can wait and add at the end in order to add salt to taste)
1 8 oz can tomato sauce
1 1/2 cups chicken broth*
1 Tbl. of fresh or frozen cilantro (optional. I keep little cubes of Trader Joes frozen cilantro for occasions such as this!)

Combine dry ingredients in a small bowl (or not, but it can save time for prep). Pour tomato sauce, chicken broth into a small/medium sauce pan on medium heat. Add dry ingredients. Bring to a boil then reduce heat to medium-low and simmer until the sauce is as thick as you'd like. You can add more chicken broth or water to thin the sauce more. Add fresh or frozen cilantro as the sauce is simmering. Makes about 1 1/2 cups of sauce.

*chicken broth: Monica also doesn't have canned chicken broth, a problem we've discussed before, so for a while now I've been attempting my own non-canned chicken broth in an attempt to save some money. I've made my own using the carcass (such a great word) of a rotisserie chicken - EASY! But even easier to make and store is this stuff I found at Costco for cheap. As in, cheaper than a jar of the same stuff that's half it's size at a regular grocery store (Costco sells it for abt. the same price as the Amazon link). It's just like any other broth/bouillon/granules - mix a tsp with boiling water to make a cup of broth. This jar makes 76 cups! That's like, a third of the price of canned broth. IF I buy that canned broth on sale. I am tempted to show you the math, but I'll assume that you're trusting me.

Email ThisBlogThis!Share to TwitterShare to FacebookShare to Pinterest
Labels: recipes

Our little Henry is a 1 year old.  He had a rough birthday morning, and it resulted in this somewhat emo birthday picture. 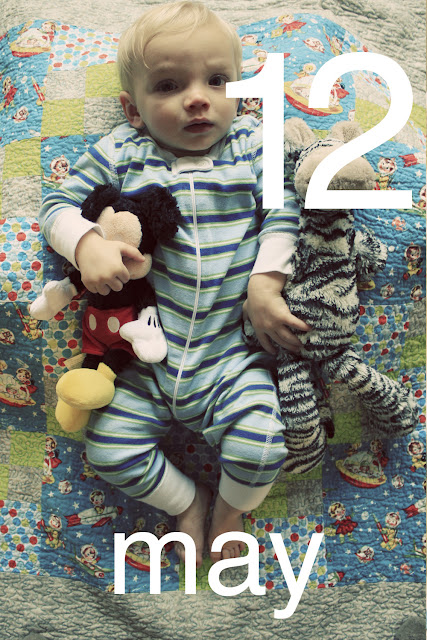 Want to see how he's grown over this year?  Check out this animated GIF: