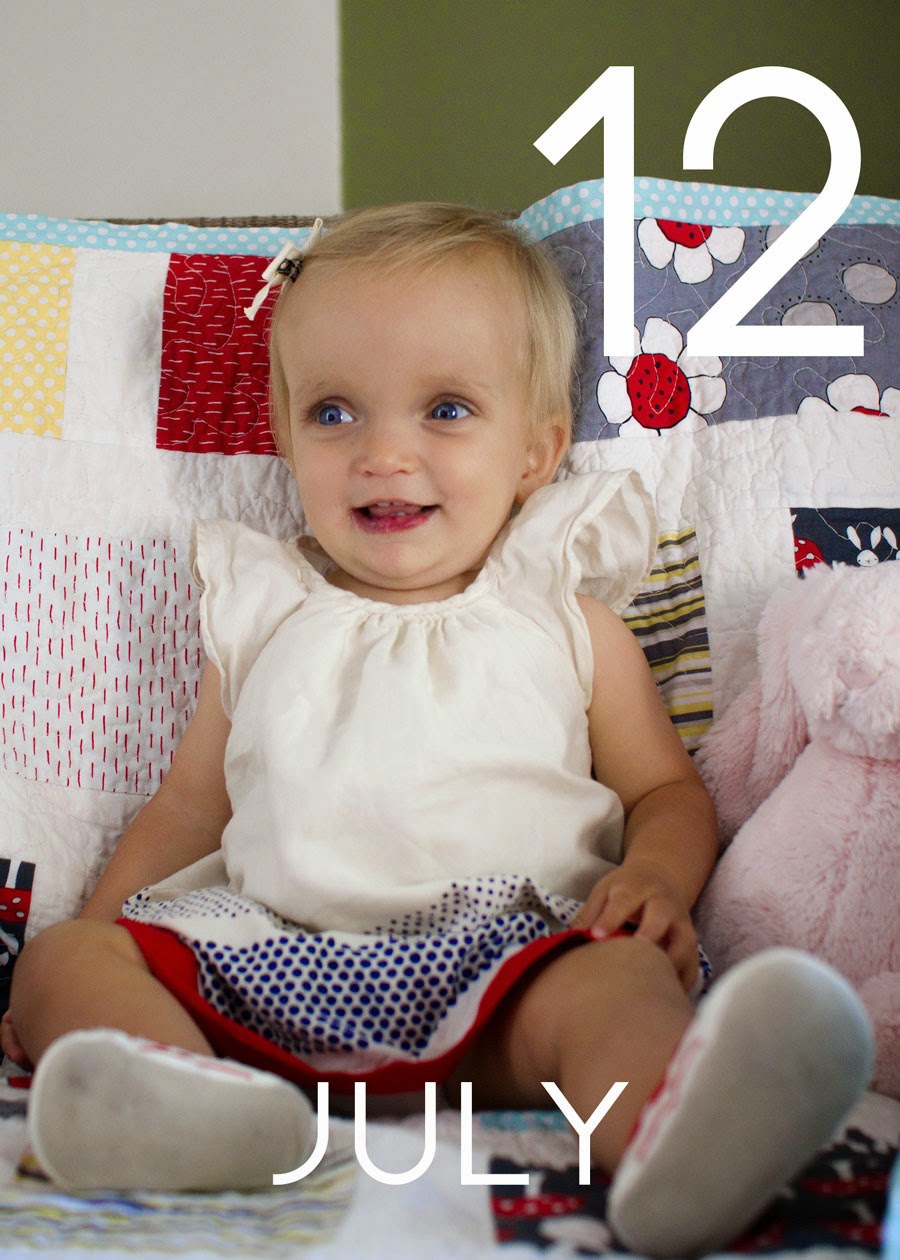 It happened, our little baby girl turned one. And one day we'll be calling her our little girl, not our baby girl (okay, I'll probably always call her my baby girl). She looks a little goofy in this picture because for the first time in a year she gave us a hard time during the photo shoot. I'd say we made off pretty well if this was the first tough photo shoot. I do like that this picture shows that she's looking a little bit older. I also noticed in the last few days that her thighs are less chubby - the only chub she really had, she's pretty little.

June is half sweetheart and half spunk. Yes, we'll call it "spunk." Her Grandma Nyland is our family astrologer and has confirmed that June, who is a Cancer with a Pisces moon (is that right?) is highly emotional. No kidding. Our drama queen makes herself cry - I call it "drawing a foul," arches her back in protest, tends to be upset without anything that we can think of to make her happy, and overreacts to Henry bothering her (when she's not the one wrestling him!). The other side of that is that she's easy to get laughing and can be sweet and cuddly.

We've learned that she loves to be physical. Like I just mentioned, she loves to climb all over and wrestle Henry. It seems like since crawling a couple months ago she now has the constant urge to be pushing herself further, physically. She loves to climb stairs, in fact she's a little obsessive - if she sees stairs she heads right to them or fights to get out of our arms in order to climb them. She likes to go up and down slides. For her only birthday activity (because, of course, she's only one so I don't need to actually plan anything for her birthday) we went to the mall play place where she loves to climb the stairs and go down the slide). I've tried to figure out what other climbing equipment she has access to that fits her development but stairs really is it.

She's an excellent sleeper at night. Since our last round of night sleep training when we got rid of all her night feedings a few months back she hasn't regressed at all. She does continue to wake early, though, which is tough. Most mornings she comes into bed with me and nurses and most mornings her and I are both able to fall back asleep. A lot of mornings she wakes up so so early (this morning it was 5:15) but I won't get her until about 6:30 so she's up and crying until then. I feel bad but I know the alternative is that she'll learn to get up earlier and earlier. Naps are hit and miss. She naps a lot in the car during our summer activities but in her crib she only sleeps 30-45 minutes usually. She's pretty happy despite that.

June prefers to feed herself with a spoon and if the spoon happens into the right position in her hands she actually doesn't do to bad of a job! She really loves cereal, just like her brother who refuses almost anything but cereal for breakfast, and will eat 2-3 bowls of cereal with milk (the cereal just sort of soaks up all the milk). Her favorite is still drinking water, milk, anything. If she sees a water bottle she complains until it's given to her. Liquid and fruit - that would make up her entire diet if we let it.

She is a talker these days! All of the sudden her babbling has taken off and it's adorable. "Dabadow" is my favorite. I haven't noticed that she understands a lot, but I wouldn't be surprised if I just haven't paid enough attention. The other day in the tub she was standing and when I would tell her to sit, she would, then stand quickly again until I told her to sit again. She'll do some tricks like clap and put her arms up for "ta da" when we tell her. So, I guess there are things I know she understands.

This is the last of the month updates for our June June. I can but can't believe she's one years old. She still seems like such a baby, so small still. I feel like I didn't take her being a baby for granted as much as I did with Henry, I think that's probably due to being a parent for the second time, so she doesn't seem so "old" to me all the time. I feel really grateful that I was able to cherish those times when she was so little.

We love you June! We are so blessed to have you in our family!
Posted by Rob at 8:49 PM No comments: