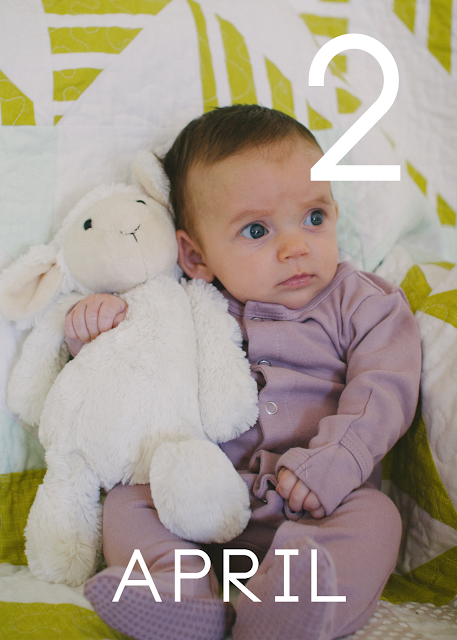 Lucy is already 2 months old! And we know time is only going to keep going this fast! I love this picture of Lucy because that's her typical expression. I'm trying to get her to smile in the picture and she's looking at me quizzically - whether she's interested or not impressed, I'm not sure. Our girl has changed a lot in the last month, in all good ways:

Lucy is an awesome sleeper at night! I've heard stories about newborns who sleep through the night and now I have one! I'm expecting it to change any day, but for a few weeks she's been sleeping from about 10pm to 6am or later! It's so wonderful, especially because I was having a rough time with her feedings at night. The only thing I can contribute it to is shortening her daytime naps, I wake her up after an hour and a half. She is hit or miss anyway with naps, so often on her own she only sleeps less than an hour or our schedule only allows her to sleep during running errands so she's in and out of sleep.

She's really happy now too, smiling and cooing and just loving any attention we give to her. Grandma Karen was in town visiting and her and Lucy just talked and talked to each other all day long:) She's put down to hang out in her bouncy seat, on the floor, on the bed, etc a lot and she's pretty happy. I get a little sad for her that she isn't held and talked to as much as I know she'd like to be - oh well, we're busy! Her smile is the best - it's big and easy to see. Really, just as long as you're talking to her and she's not starving or super tired. In fact, I can get her to hold off sleep a little if I need her to even though she's tired as long as I'm interacting with her and getting her to smile.

I attribute her improved mood to her digestive system maturing a bit - she still spits up but not nearly as much as she used to and other than spitting up she doesn't seems to have belly discomfort like she did her first six weeks. This improvement is good for her and has allowed us to enjoy her a lot more.

She weighed 9 lbs. 13 ounces (17th percentile) at her appointment, so although she seems SO big to us all of the sudden she's on the smaller end of average. She's lost a little more of her hair on the top and sides, but people continue to comment on how much dark hair she has (I don't think it's that much hair, so maybe it's just the darkness of it that people are noticing). That, or they comment on how big her eyes are or how strong she is (holding her head or her trunk well).

I love going on walks with her, it's great knowing she'll fall asleep quickly. I often will go on a walk with her in the evenings to help her get in one more short nap.

Lucy definitely seems to be doing a lot more than I remember my other babies doing this young. It could just be bad memory but I'm constantly thinking and asking her out loud, "don't you know you're only a tiny baby?!" Our friend Lindsay is pretty sure this means that Lucy is a genius... so maybe that's what it is!

I've thought a lot about how I would describe her personality and I haven't quite decided yet. Yes, she's happy, but it's more than just happy (I probably would have described June that way, and she's turned out to be my spunky extrovert), she's happy but serious too. Whatever it is, I'm excited to find out and get to know this sweet girl even more!
Posted by Rob at 5:43 PM No comments: 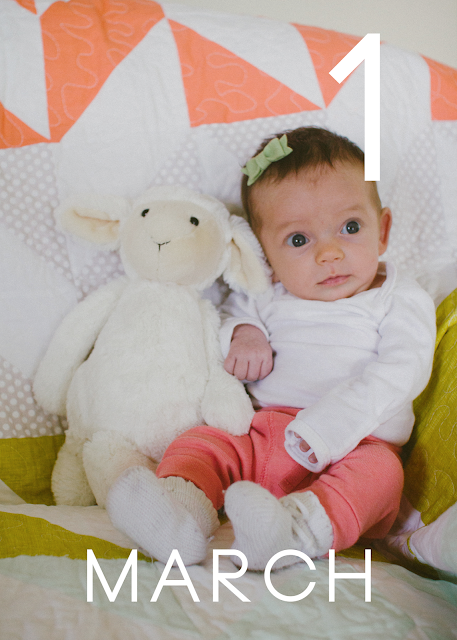 We welcomed Lucy Annette into our family on Feb 3rd (birth post in progress) and she turned one month old on March 3. She is such a cute sweet baby, we love her so much!

Lucy is very alert, most people who meet her say the same thing - bright eyes and seems curious. She is especially alert and curious when brother and sister are close by and she sees them or hears their voices, I love that it seems like she already knows them (I like to think she remembers them from the womb, and I'm pretty sure there's research that would say that's likely!) and feels a special connection to them. And they definitely love her! Henry, our little lover, asks to hold her a couple times every day. June does as well but is usually done after a few seconds. When not holding her they "ooh" and "aah" over her and say things like "look at her tiny hands!" and "she has no teeth" (June is really interested in the fact that she has not teeth).

I have a rough time with her sleeping at night, not that she's harder than any other newborn, I'm just having a rougher time with it, I keep trying to remember to suck it up and be okay with it being hard right now. She wakes 2-3 times every night and nurses for a while before she goes back to sleep and getting her back to sleep can be tough, I usually have to try a couple times to keep her asleep so that's extra frustrating. The main problem, I think, is that she's uncomfortable from gas. I think she needs to pass gas or burp and doesn't so that's what wakes her up 5-20 minutes after I put her back to sleep (yep, I get just settle back to sleep myself and she wakes back up!)

That is what is tough with her during daytime is the same thing, she spits up a whole lot. Henry was the same and I learned with him that it's not a health issue, just a laundry issue! She might spit up even more than he did but it stresses me out less. The bigger problem is that she acts uncomfortable and not very happy most of the day. She's happy napping and she's happy eating, but the time in between eating and taking the next nap is difficult.

Her dark hair is thinning slightly on the sides and front and her eyes are turning more blue every day. Yay- all my children have my blue eyes! Everyone says she looks like Henry and we agree. I don't see it all the time, but when I saw her for the first time that was my first impression - that she looked like Henry, so people still saying it must make it true. It's her eyes, she shares wide-set eyes with Henry and Rob. Her lips are less full than Henry and June had, she has the cutest tiny mouth!

I love taking naps with her and I'm super grateful that I've been able to do that a lot. Rob's mom was in town for Lucy's first month, with the exception of the week that she and Rob's dad took Henry and June to Disneyland to give us time with just our little baby! It was amazing. I took naps during the daytime with the baby and Rob and I acted like new parents with our first baby in the evenings (watched lots of movies, ran errands, ate whatever we wanted... and ate it on the couch while watching said movies). It was pretty dreamy.

Lucy was blessed at the end of February and she was so lucky to have all her grandparents there! Rob's parents were still in town and I asked my Dad to come early to Utah for a business trip he was already planning on for the week following in order to attend her blessing, and my mom decided she wanted to come too! So great to have all that love for her and a special treat for all of us to have our family around.

We're so excited for our family to have grown to include Lucy!

(as with our other children, quilt in the picture was made by Grandma Karen and the stuffed animal was given to her when she was born from Grandma Nyland)
Posted by Rob at 10:21 AM No comments: