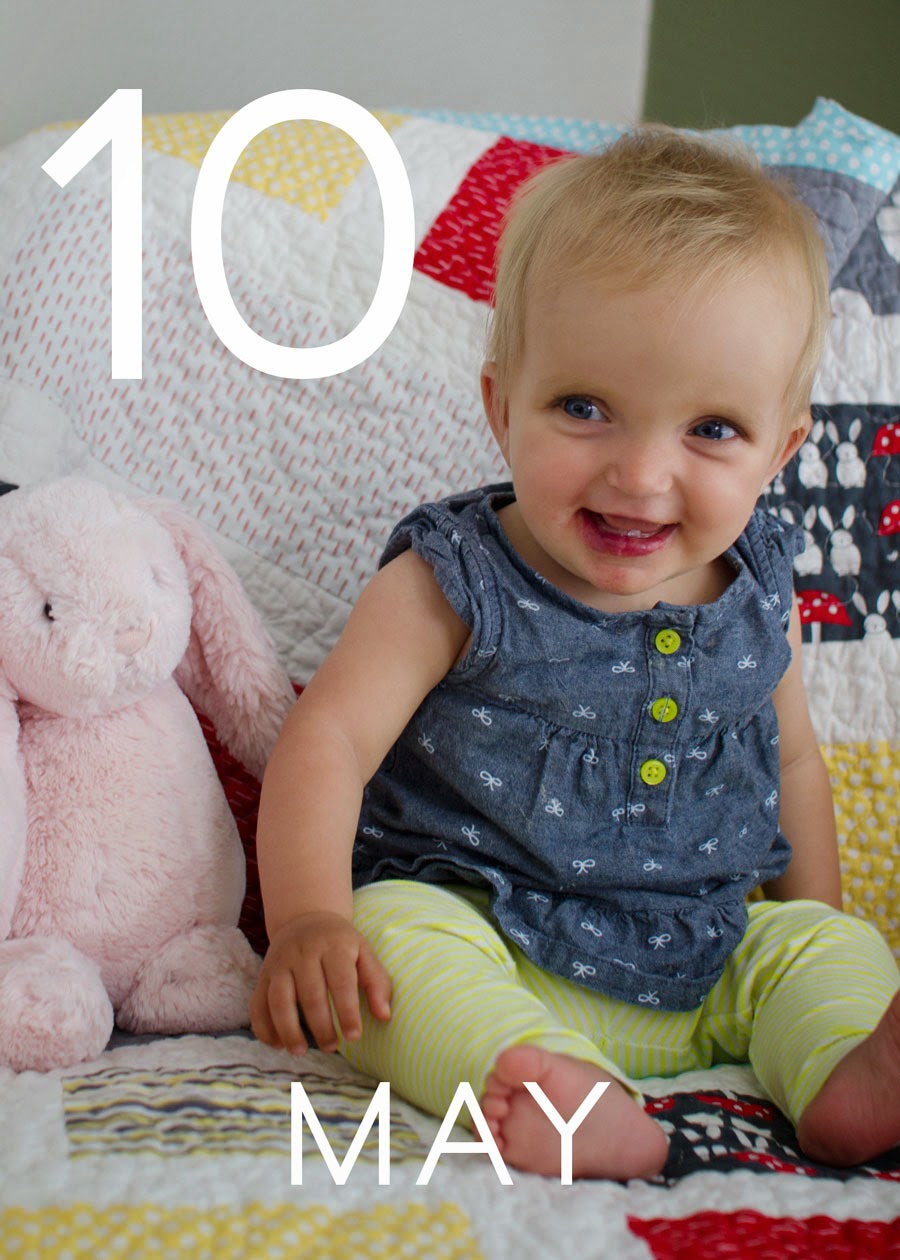 This month June is moving all around! Just not in the direction she prefers. She can go from sitting position to on her hands and knees to on her belly to pivoting from side to side. Once on her belly she can move backward but not forward, so eventually she gets stuck in a corner somewhere and upset about it. She's just using her arms for all this, not yet her legs. In no time she'll figure it out then we'll really be in trouble.

She has started to point, it's so cute with her little forefinger and thumb too. She'll point to something random and say, "duh, duh." The other day she did that and Henry said, "where's the duck?" It was like their first conversation :)

June has added to her consonant repertoire (her mom's an SLP) this last month but still just reduplicated canonical babbling (again, her mom's an SLP) "nanana" "dadada." She's a riot, talking all the time and laughing a lot, especially when Brother is around. Any time he's talking near her she seems to think it's to her, so she gets excited. She laughs when he or another child cries a little, but when Henry cries a lot (like, throwing a major three-year old fit) she gets really upset and cries hard.

I've mentioned how her hair is blonde and getting blonder, but I don't think I've written about how it's really fuzzy. It's the funnies texture, it changes all the time but she often reminds me of a baby duck with how fuzzy it usually is.

A second tooth has joined her first that came in next month. The first tooth is all the way in, the other is still short. Her little teeth have made her smile even cuter. What isn't cute is that she has started biting me when I nurse her. She does this only during one or two nursing times during the day and after she's nursed for a number of minutes. I don't know if she's communicating that she's done, if she's trying to see what my reaction would be, or if she's just curious about the biting sensation. It's probably a little of all of those. I've tried getting mad at her and she'll be really really sad, crying like I'm not used to seeing her cry. Other times she gets a little smile and does it then has a fake cry if I get mad. I try to just ignore her but she can really hurt me!

She gets "shy" when strangers talk to her and she hides her head/eyes. But not just strangers, she'll do it with Rob and I too. For a baby that's not overly cuddly, these are the only way we get cuddles out of her so it's actually kind of fun. The other day we were at the park and I was wondering why she was being so cuddly with Rob, then I remembered, oh yeah because he's talking to his friend that he ran into there. I came home one evening while everyone was eating dinner and she had no where to hide, but she tried putting her head down on her booster seat tray. She began to cry, I'm assuming because she was a little emotional and had no where to hide into.

Sleep is going pretty well. She started waking up earlier and earlier. When she woke up at 5:15 we knew we had to deal with it. Dealing with it meant letting her cry until a time we're okay with and Rob getting her so she's not getting up just to nurse. For the week and a half she will now sleep in until about 7am. A couple days into finally "sleeping in" her second tooth broke the gum line, so maybe it was teething waking her up?

June is a big eater and has gotten only more picky and more demanding recently. If she sees anyone eating anything, or opening something she thinks is food then she squaks and gets grumpy if you don't share. Especially with water bottles, she loves to take drinks. If she doesn't want the food she's given then it lands on the floor.


A Trip to Moab from New Land Media Works on Vimeo.
Posted by stephanie at 6:54 AM No comments:

Our baby boy, our sweet Henry Lewis turned three years old on May 2. This birthday wasn't as shocking to me as his second and definitely not as devastating as his first. It was normal, like Henry's been needing to be three for about six months now.

We repeated the tradition we started last year with a whole week of celebrating. And now that we've done that tradition twice we are done with it. Henry was confused all week long, asking "I'm three?" every time we'd say we were doing something for his birthday (his actual birthday wasn't going to be until the 6th day of our week-long plans). And, really, celebrating for a whole week is pretty excessive. Not that is wasn't super fun - I looked forward to and enjoyed the week right along with him, maybe even more than he did! Really, I finally understand parents who treat their child's bday like a holiday. I never really got it and was maybe even slightly annoyed when a parent would say they couldn't make plans on their child's bday. But, like I said, I get it now - celebrating his bday was totally a big deal for me! Or maybe it's because my life is usually so mundane...?

Here are some (a lot) of highlights from this week o' bday fun:

A night at the arcade (oh, I didn't mention - most of our activities were free. For example, we had free tokens for the arcade). 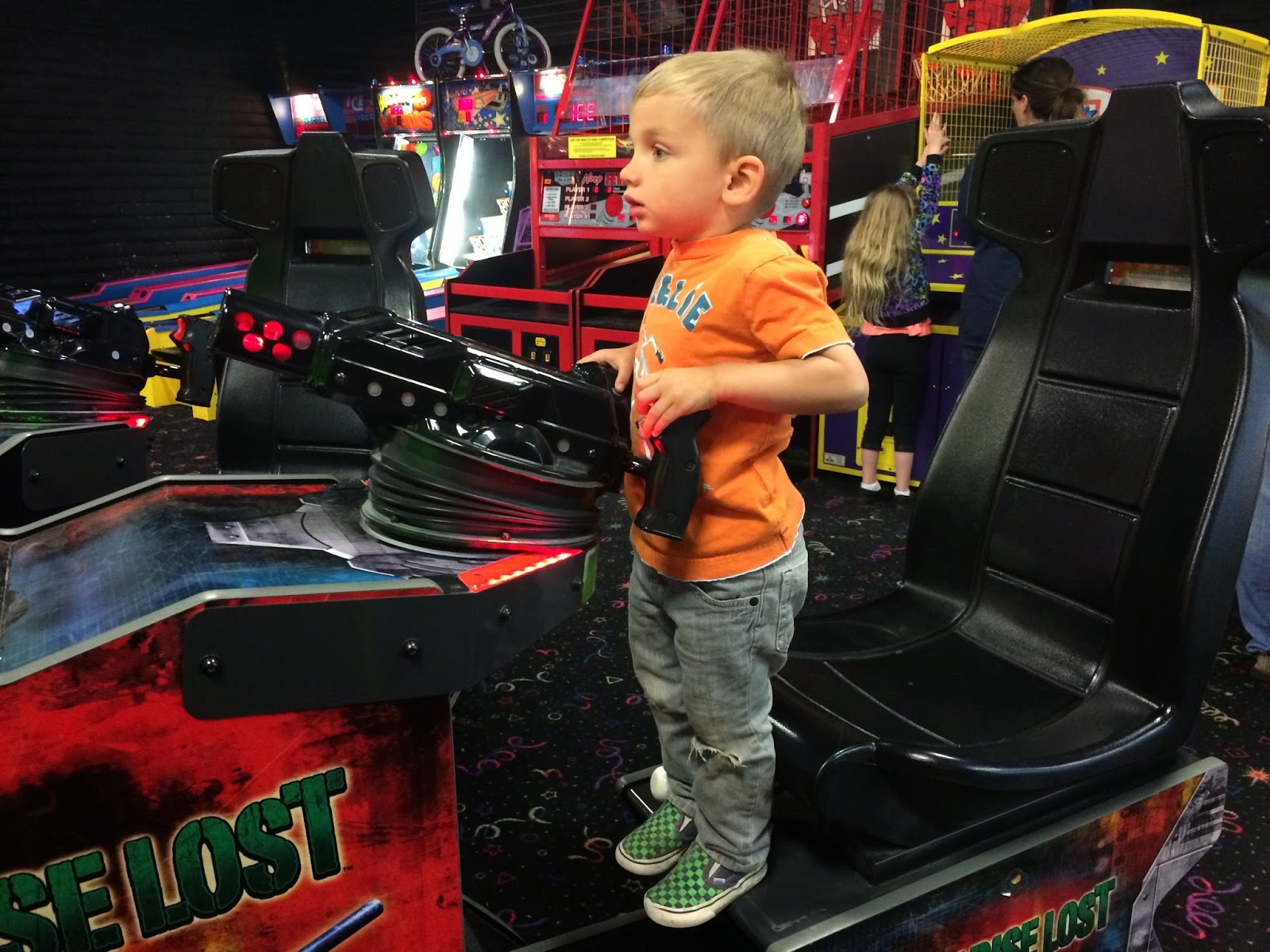 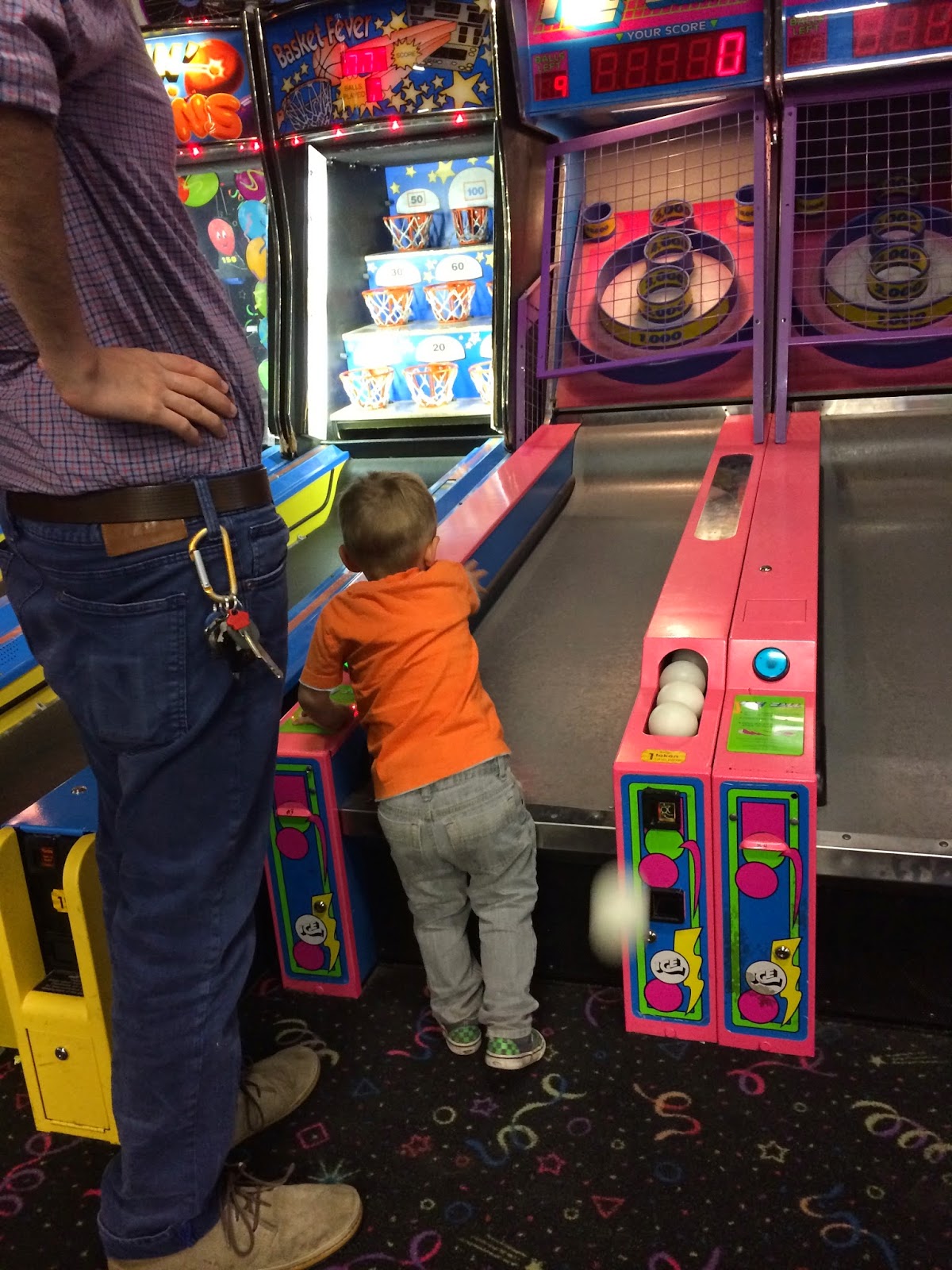 Donuts for breakfast at Provo Bakery. 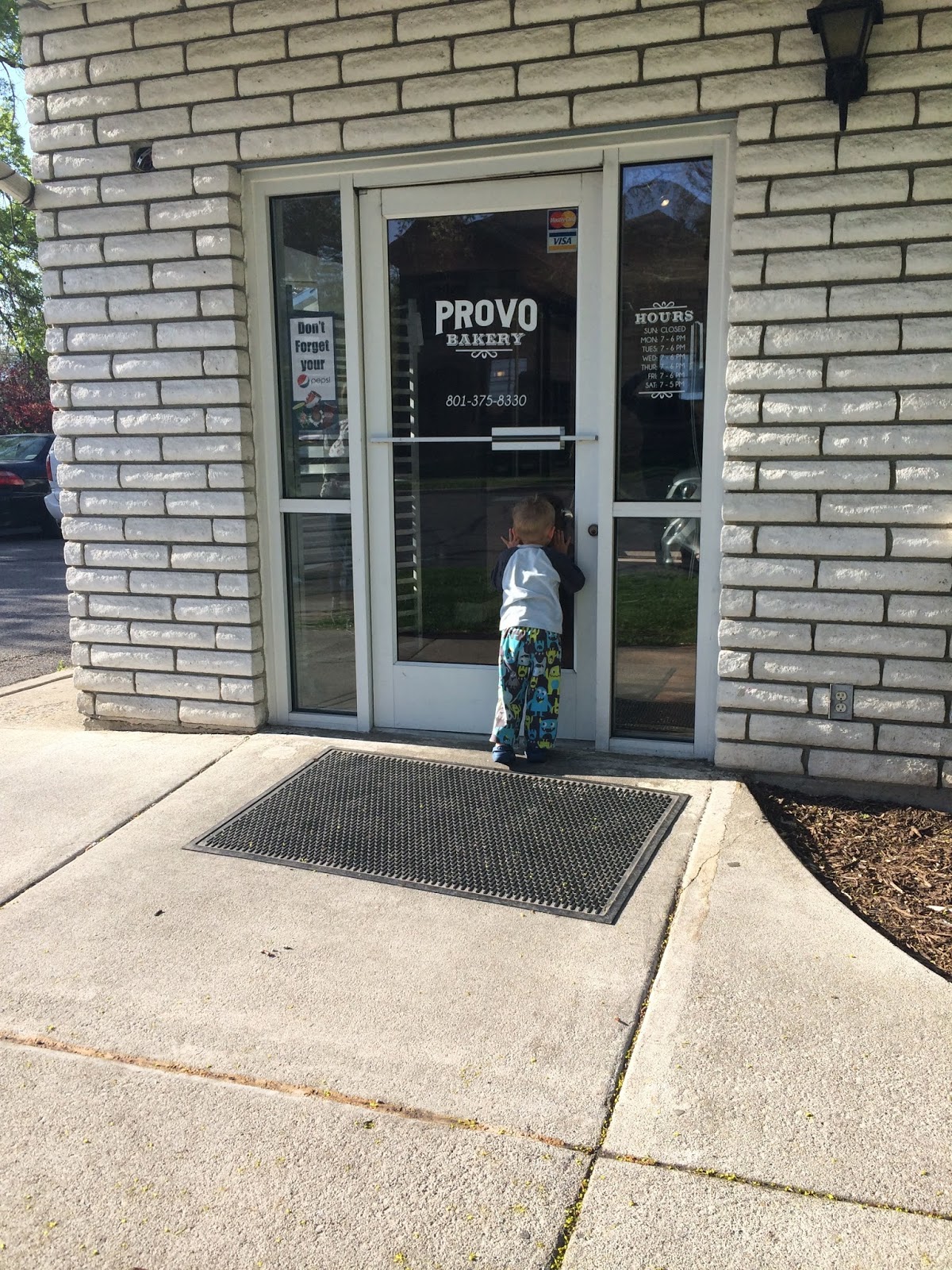 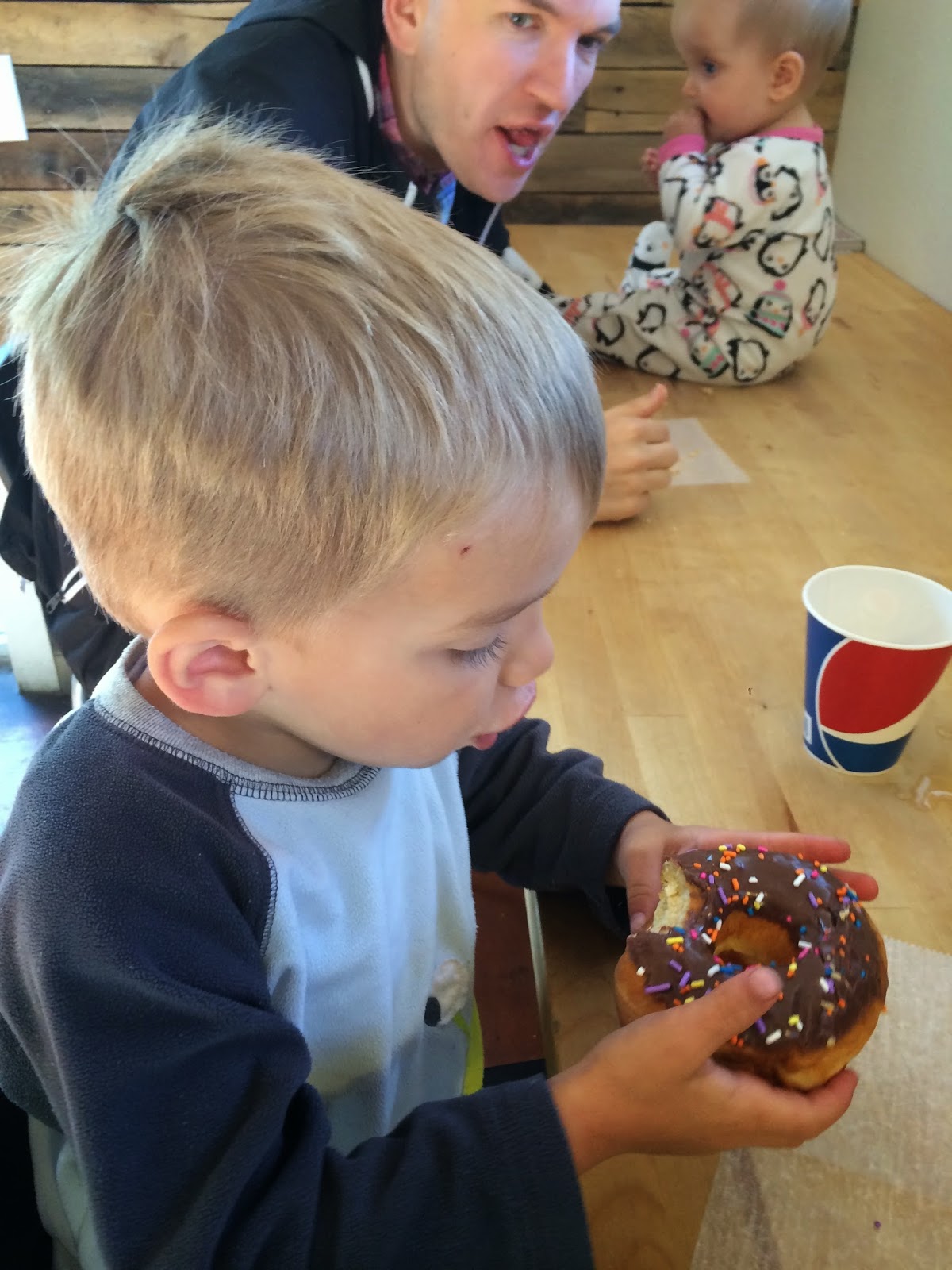 (June's donut lesson for the class) 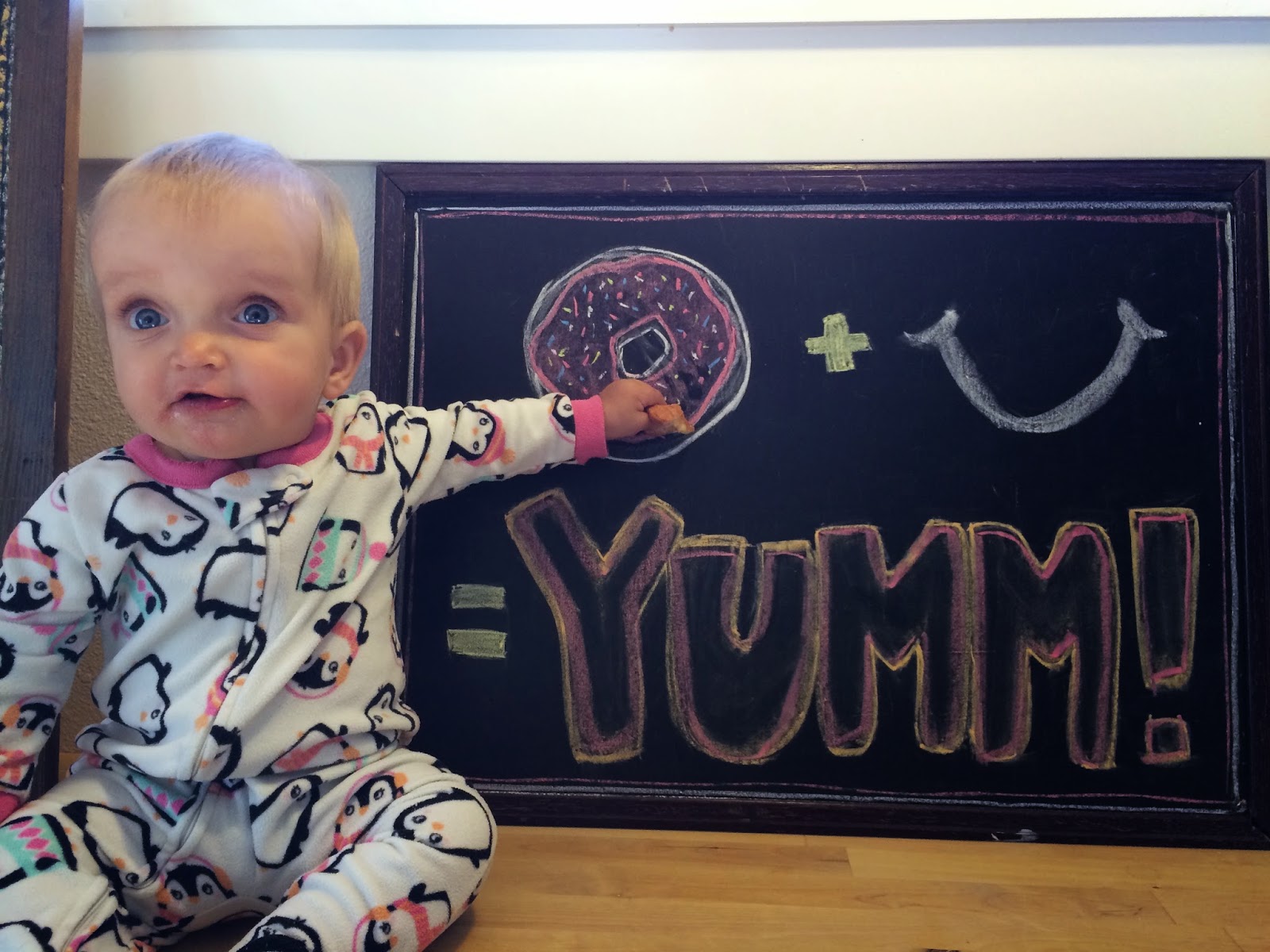 A trip to the toy store. Henry loves playing with the toys on display there, but the secret mission was to buy birthday presents without him seeing. This was not one of them. 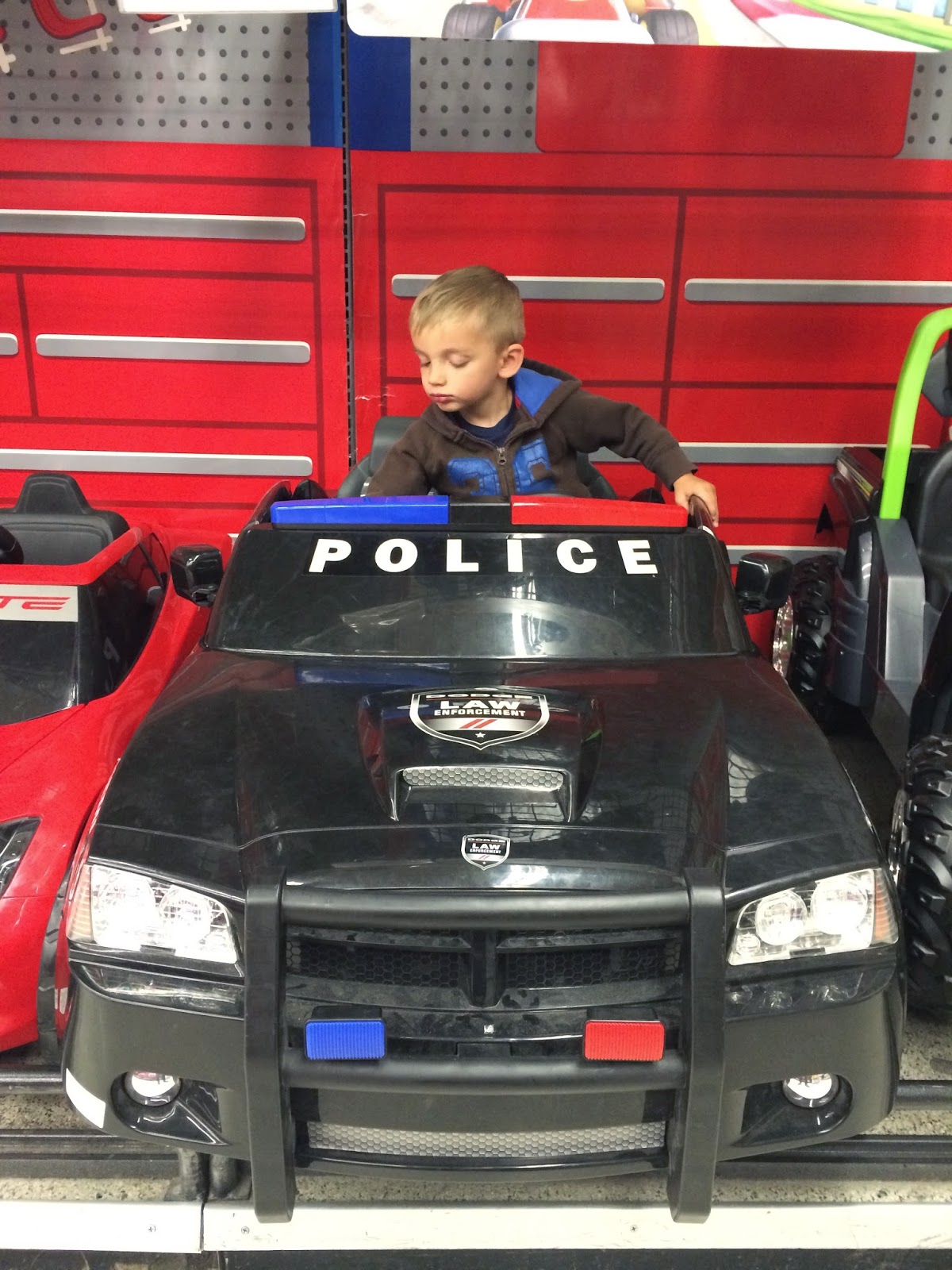 Thanksgiving Point. (tangent: we got tickets to the museum at Thanksgiving Point on Groupon... or so we thought. On our way there, after Henry being MOST excited for this particular bday activity, we took another look at our Groupon and discovered it was for a different museum! 40 min away! Ugh. So, we went for it and drove all the way to Salt Lake for a museum that wasn't going to be as cool. When we got there IT WAS CLOSED for a special event. Seriously!? Good thing Henry was only turning three and not seven and was just as happy running around the museum grounds, not disappointed at all. Plus, we met up with one of Henry's favorite Salt Lake peeps, Lindsay, which helped make it okay too.) (Oh, where did these pics come from then? The very next day a friend of Rob's offered her free tickets to the original, preferred museum. Tender Mercies.) 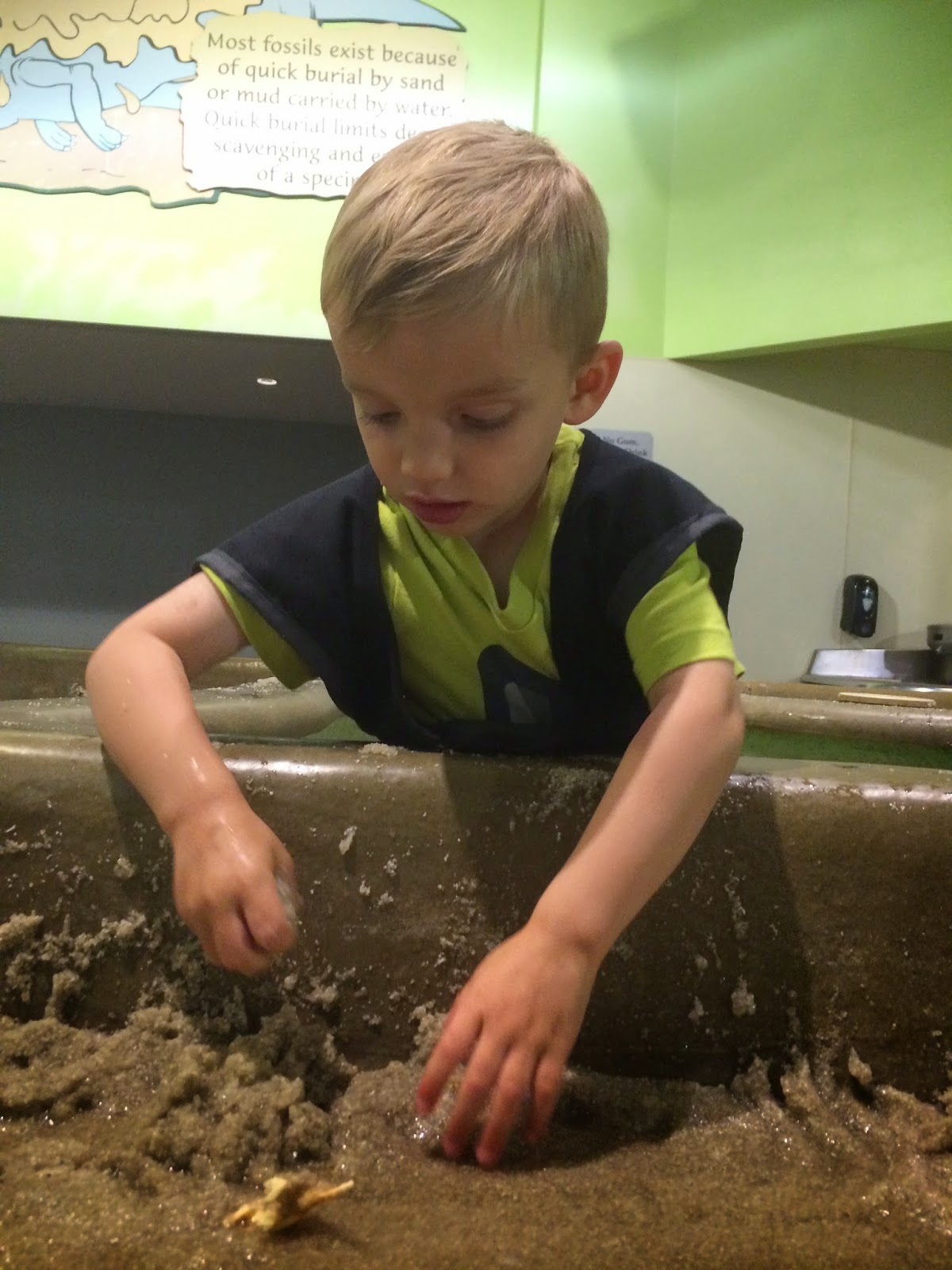 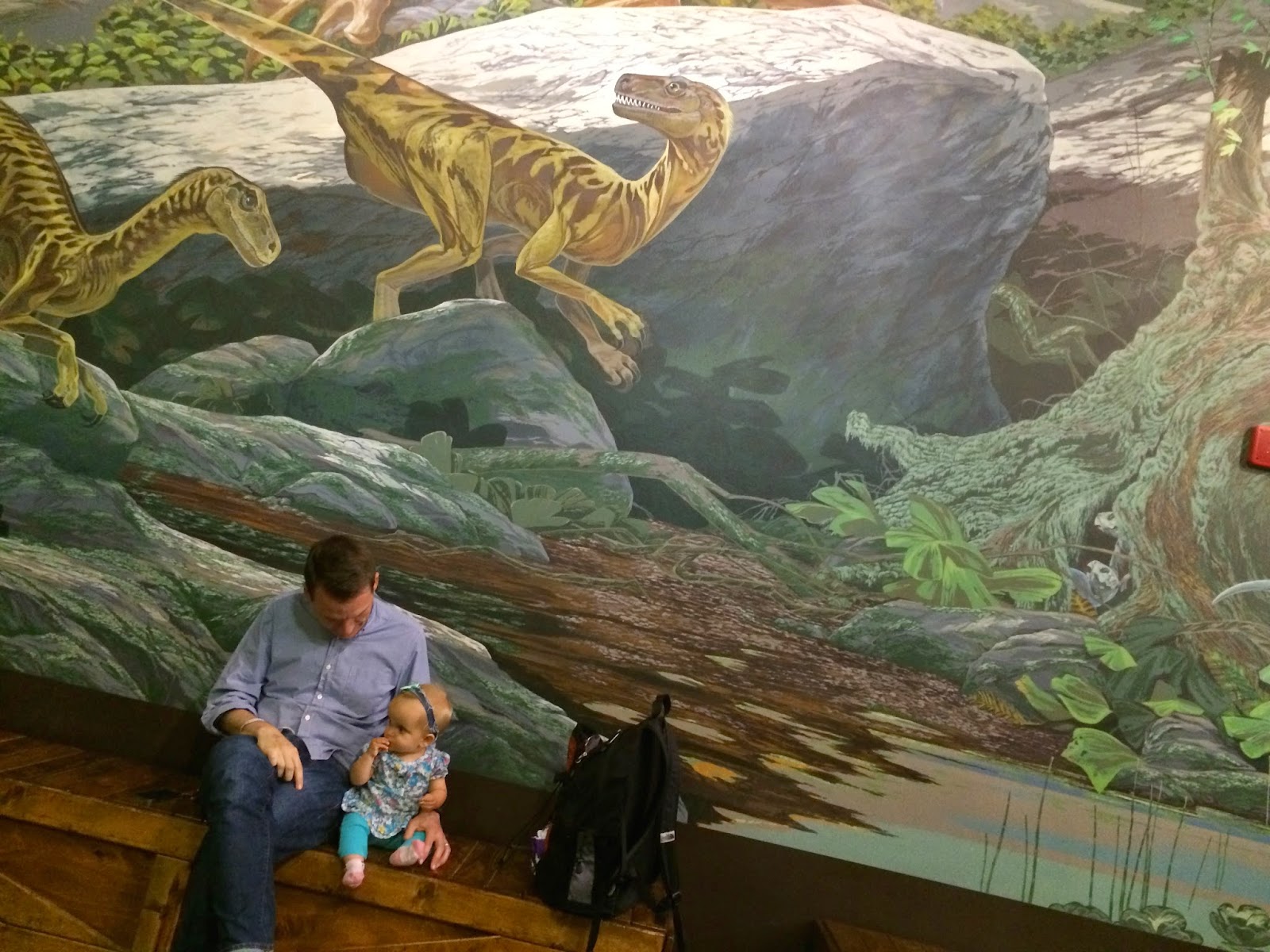 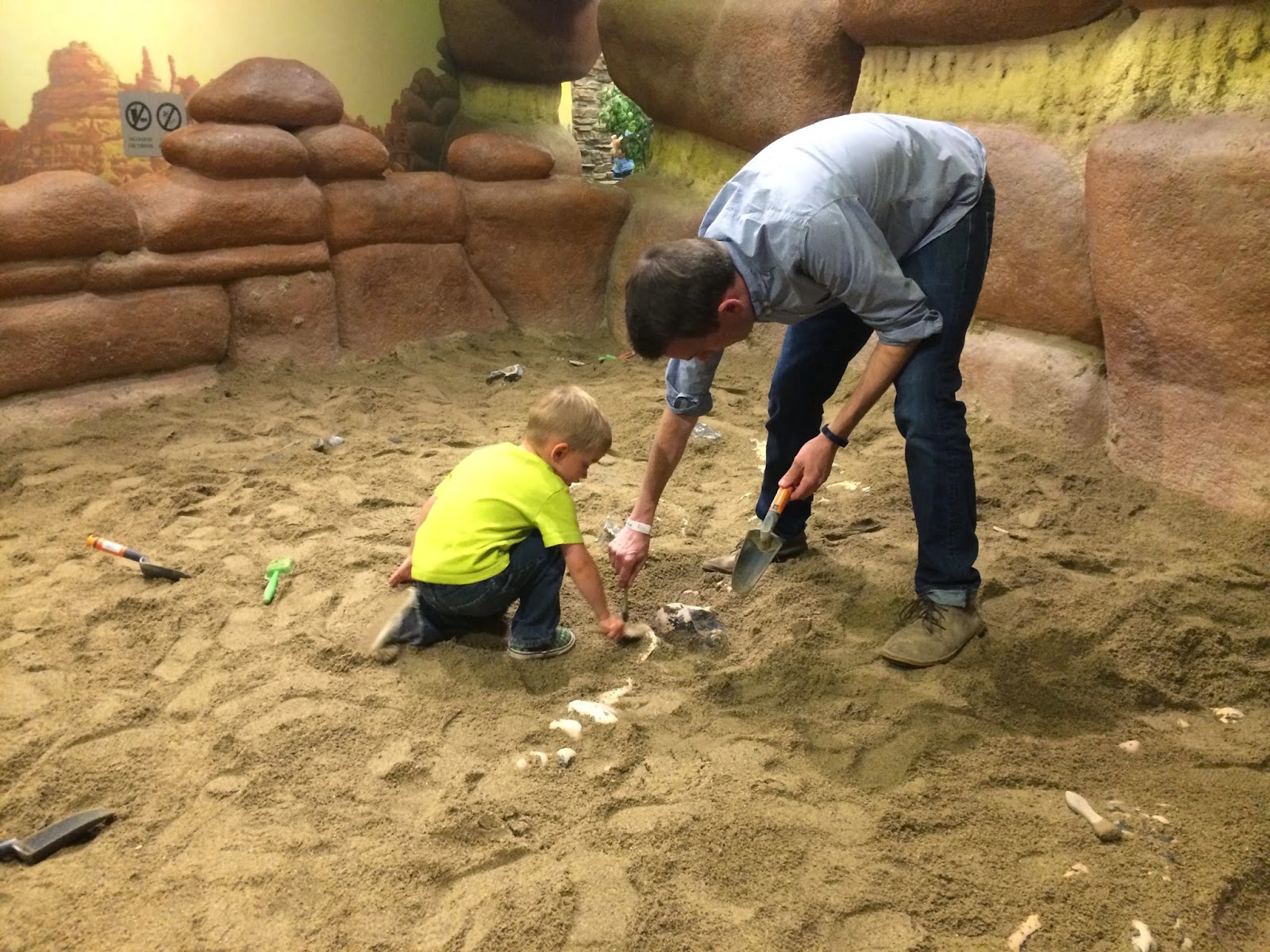 The farm at Thanksgiving Point. We were quite surprised that Henry agreed to the horse ride. 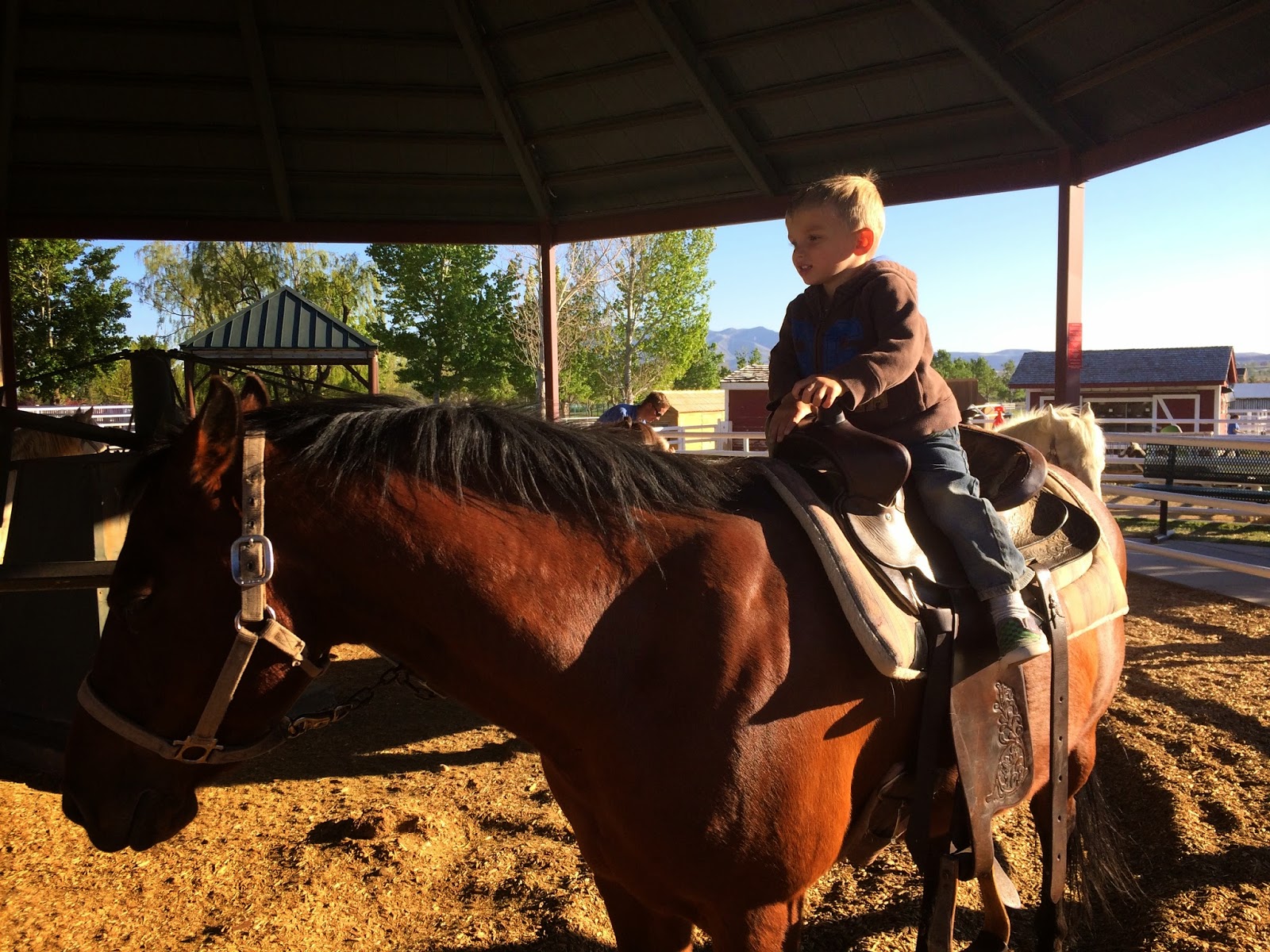 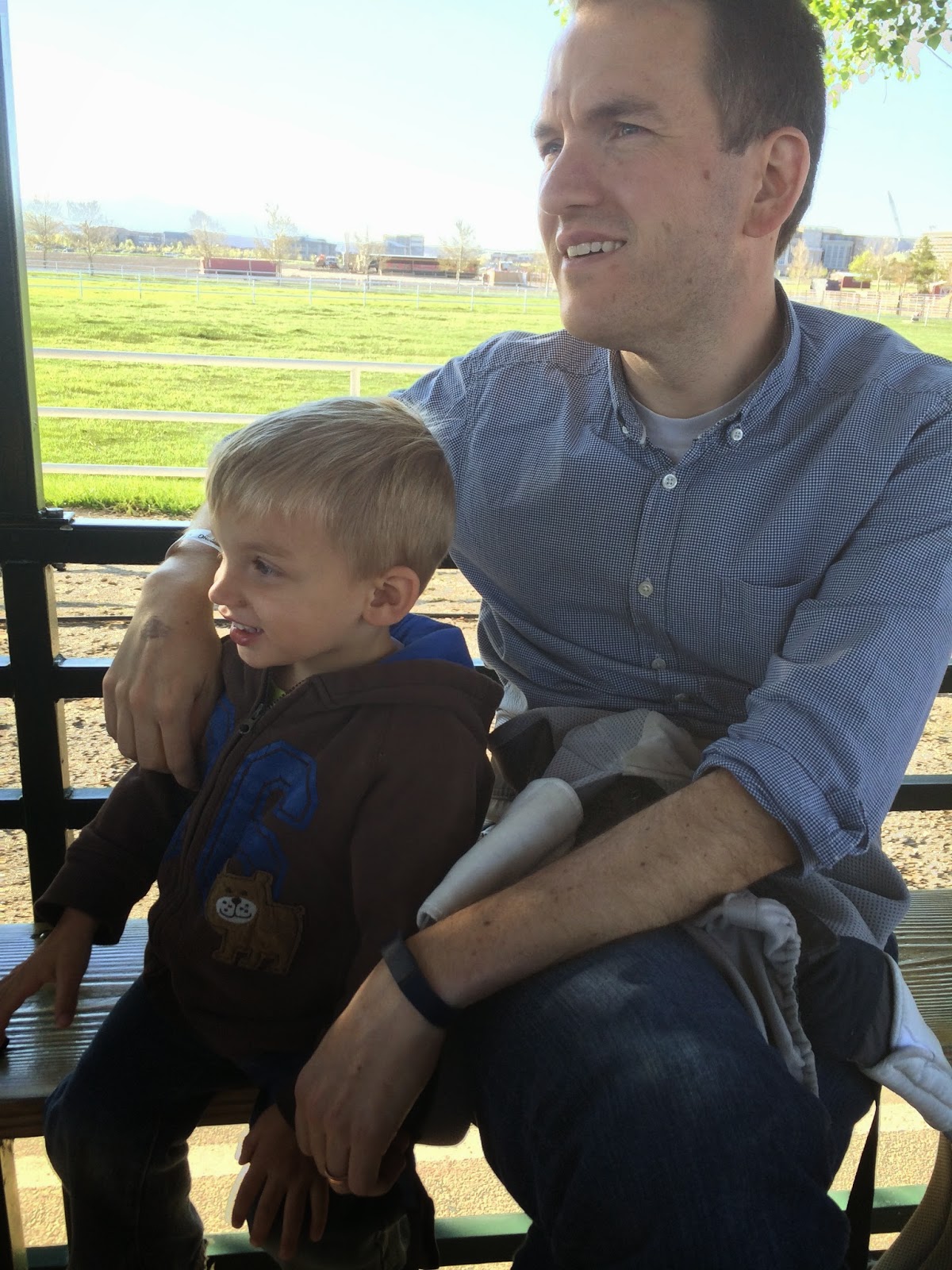 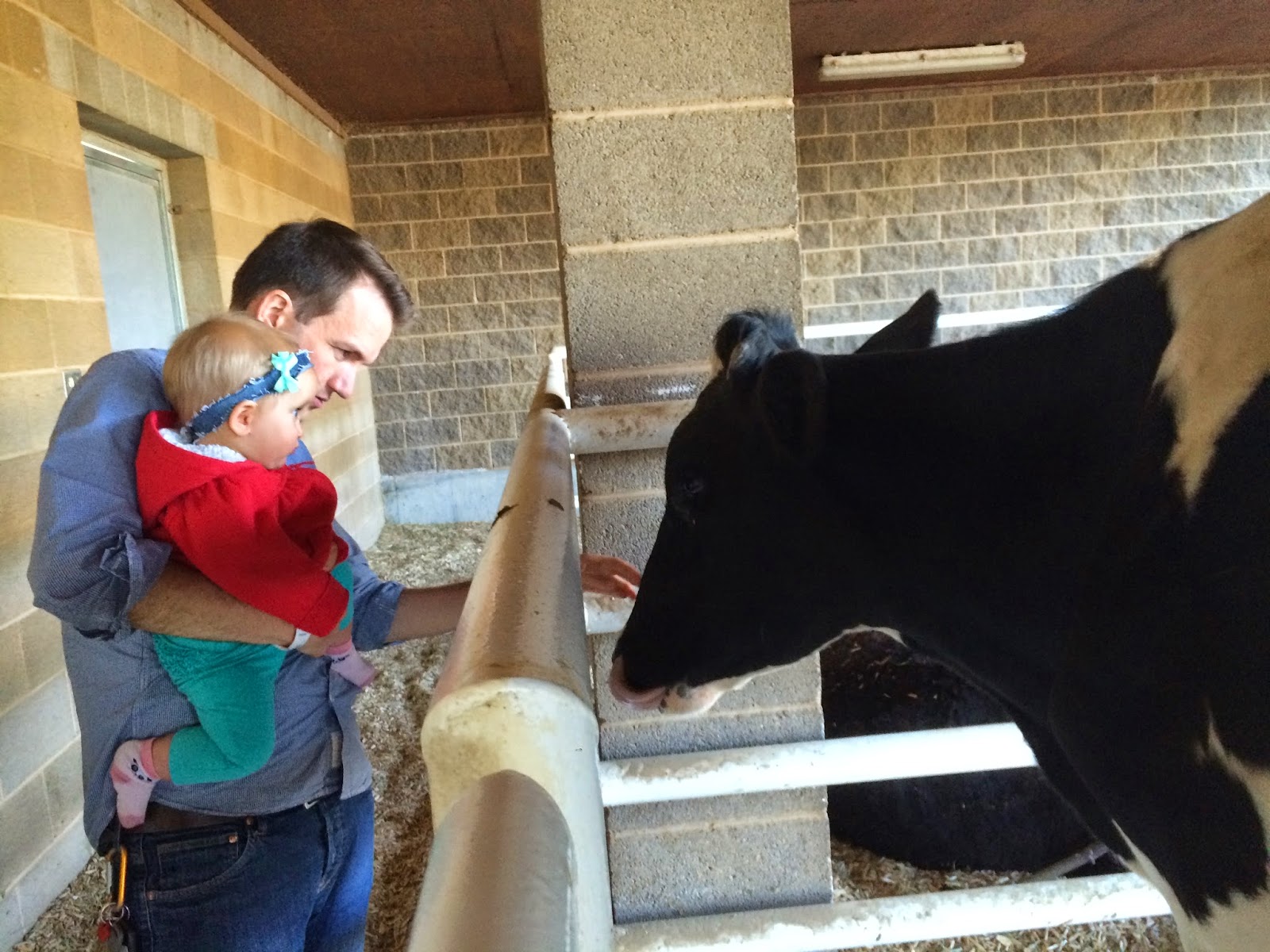 The actual birthday. Henry was willing to pause playing with his newly-opened toys only because his birthday breakfast had sprinkles on it. Here, he's saying, "Wow, it's my awesome pancakes!" 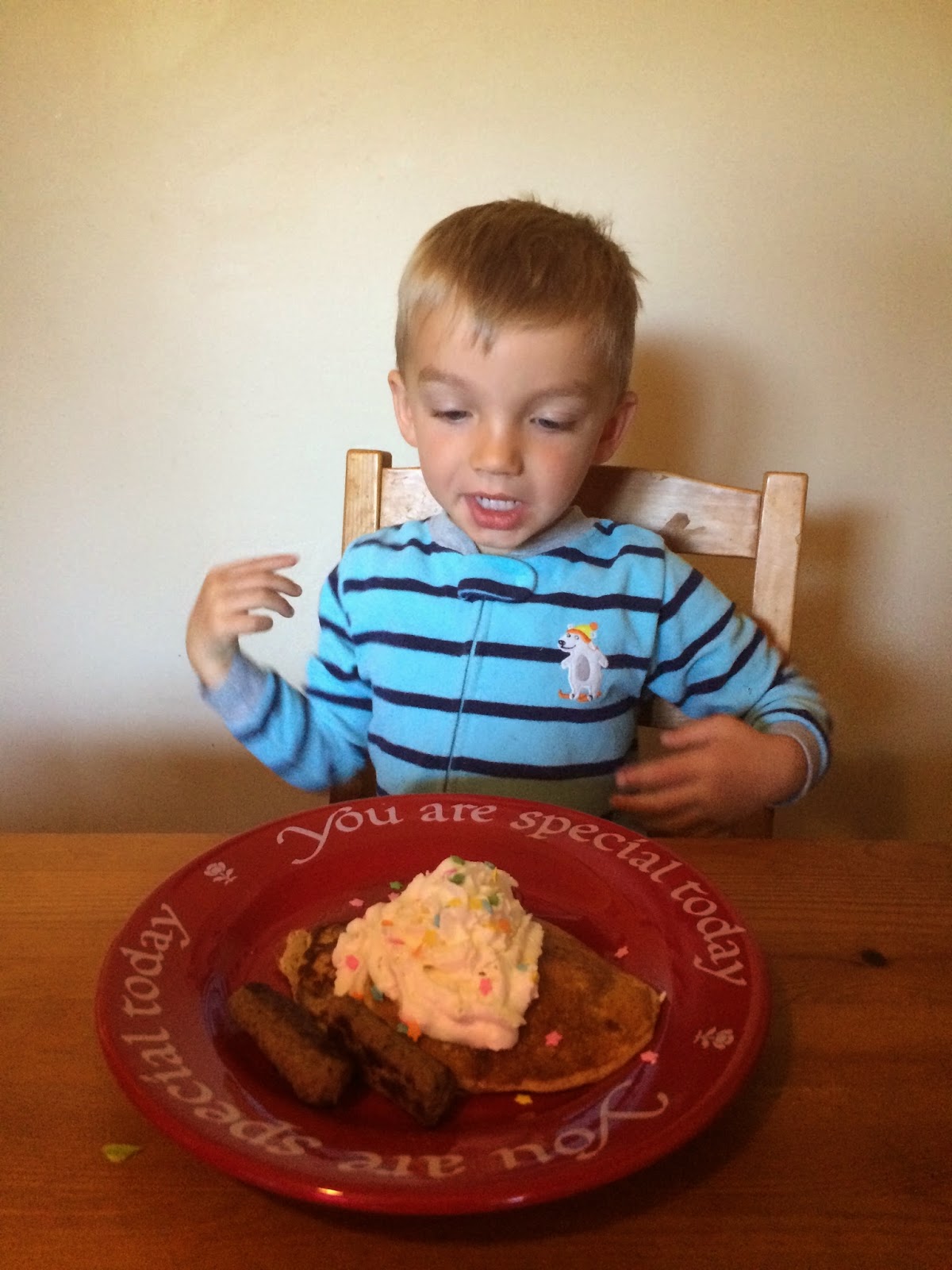 In the middle of the day Henry had a trip to the movies (Peabody and Mr. Sherman) and to "Old McDonalds" with Dad. 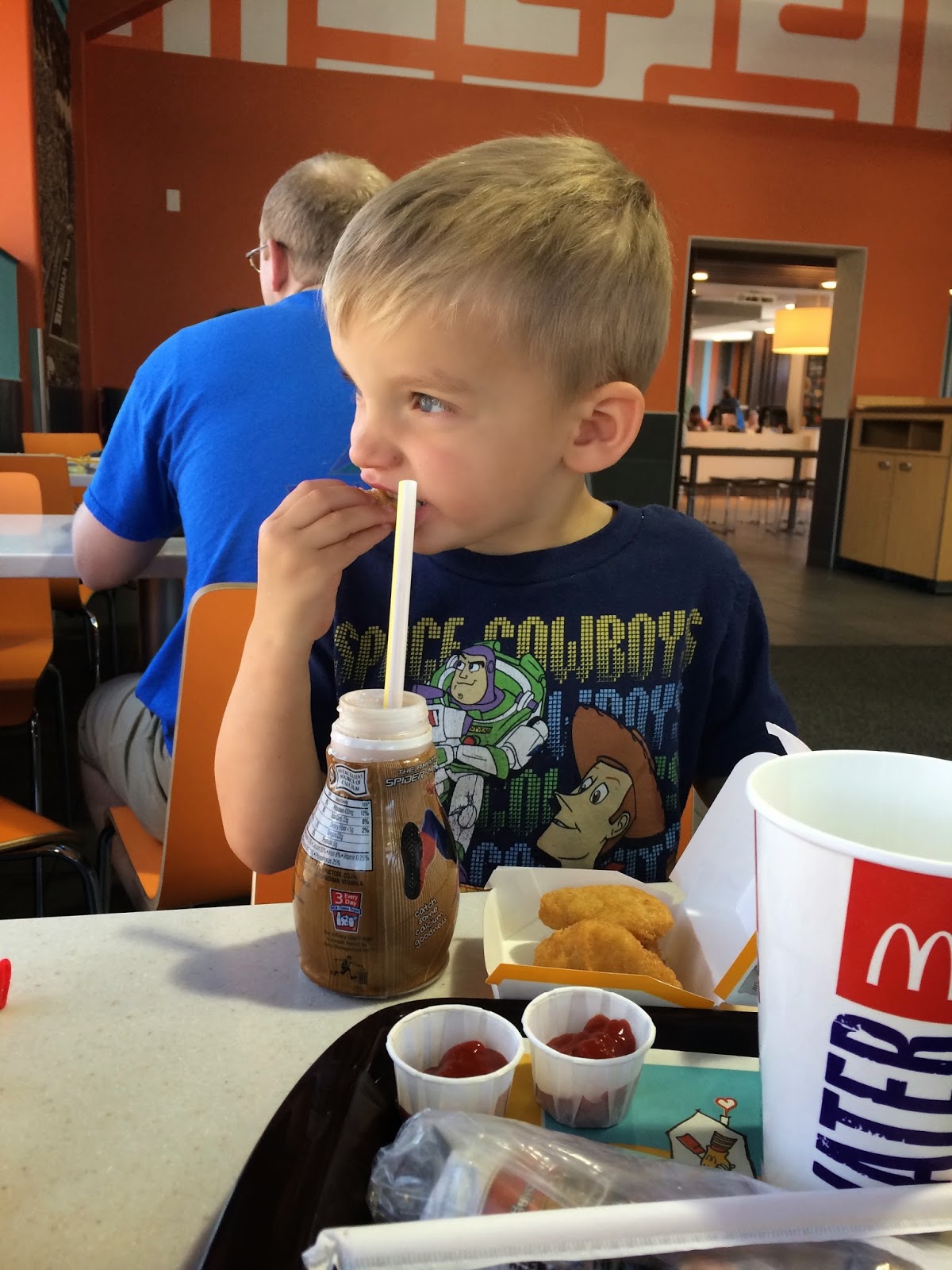 That night we invited a handful of friends over for cake. Henry's favorite thing these days is race cars, so that's what the cake was. A friend brought over a pinata that he had two days previous for his birthday for us to use again at Henry's. It was a Lightning McQueen pinata, turning our party into one that actually had a theme. 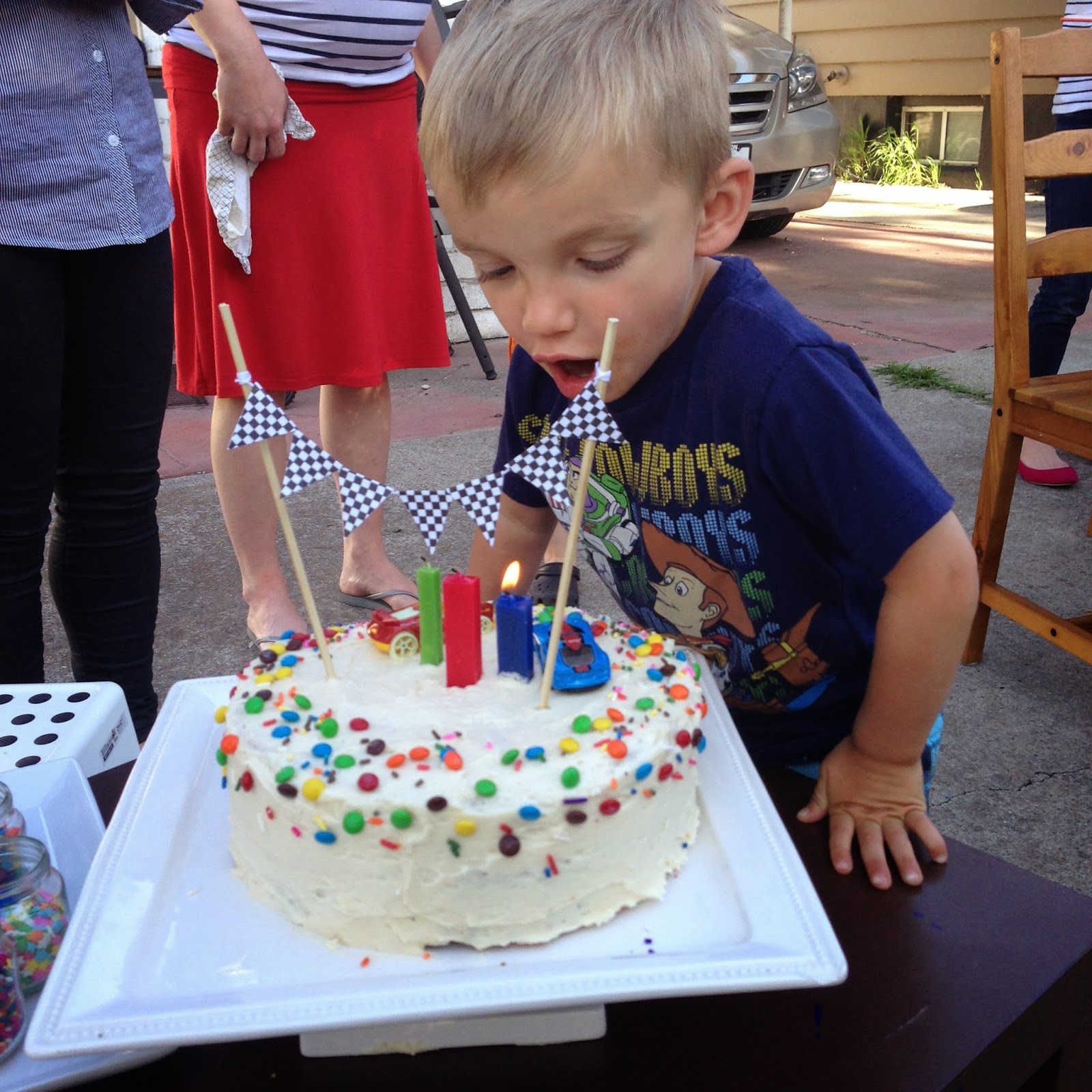 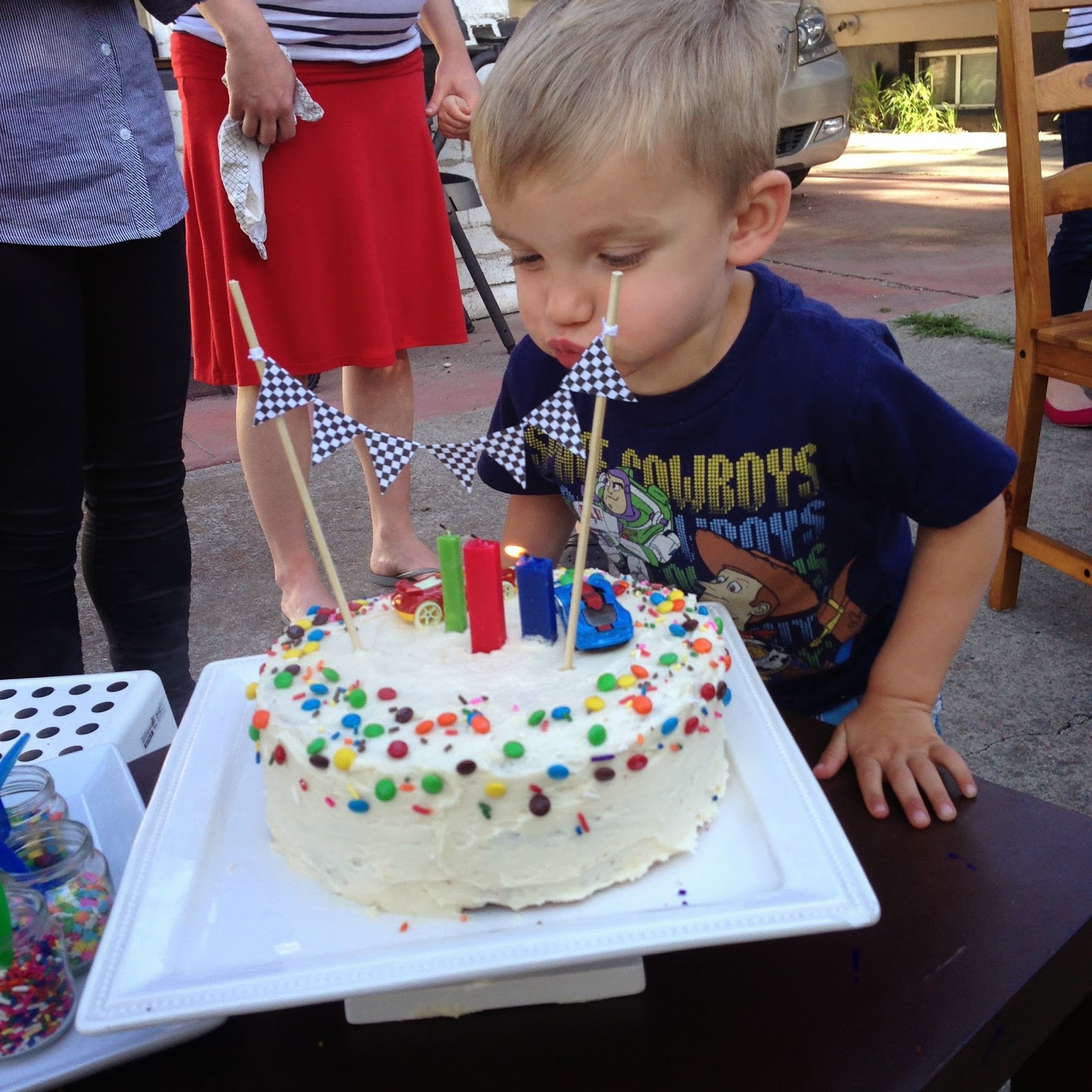 Actual action: (I don't know where he was going)

Henry loves sprinkles, so this cake was full of them. 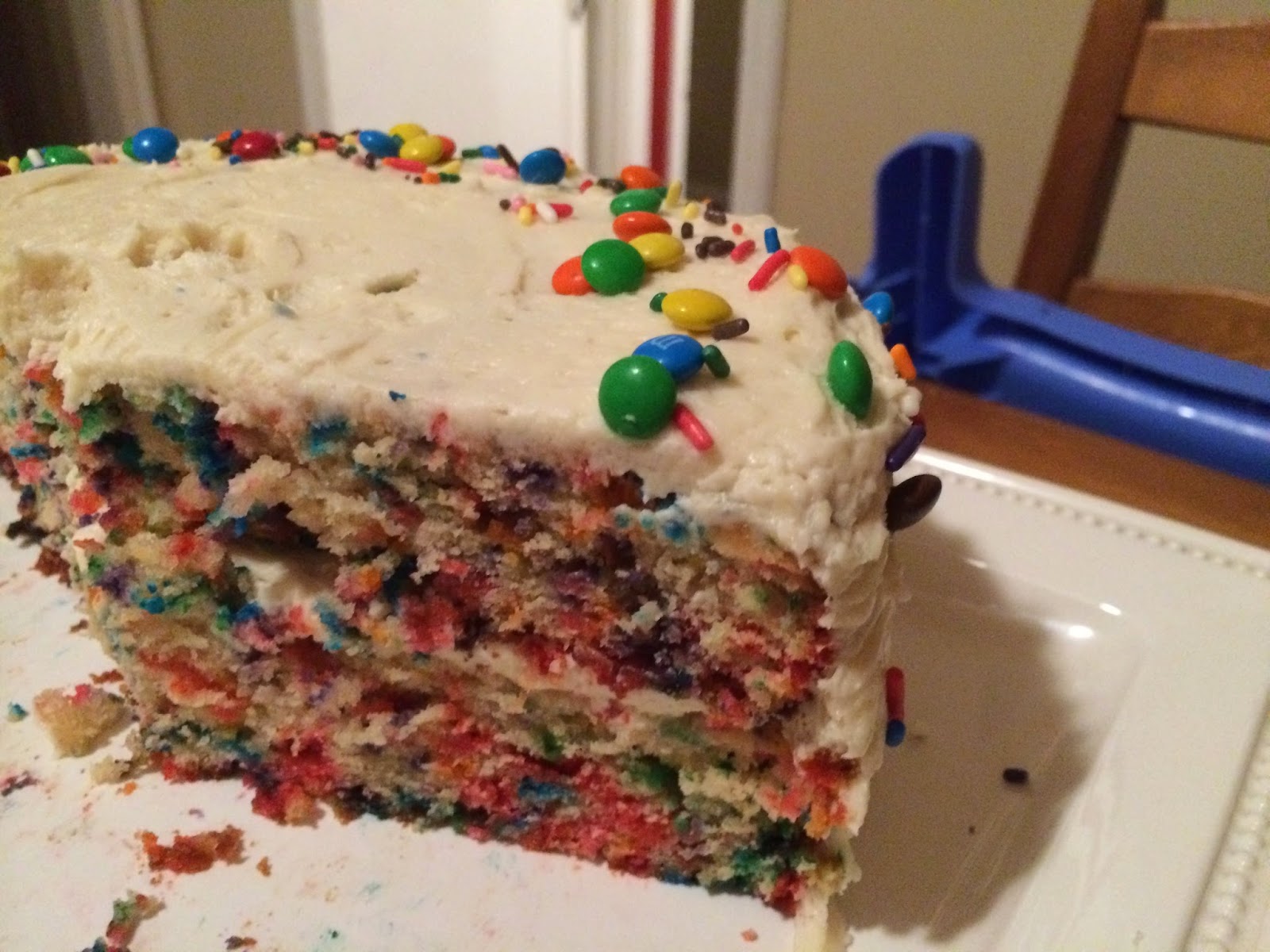 That was it. Fun week, right? And now he's three. I want to include some of what Henry is like at the end of two/beginning of three:
I want to and could go on and on. I can't put into words the love I have for my sweet boy. He is my whole world (shared a bit by his dad and his sister) and I'm loving spending this time where he's somewhere between a baby and a little boy. Every day I get to hold and kiss him and for that I am so so grateful. I love you, Henry Lewis, my most favorite boy that I ever did know.

A little over a month ago a friend texted me, alerting me that the construction crew was about to place Angel Moroni on top of the new LDS temple in Provo. I was so excited! It was June's nap time which I rarely tamper with but I really really wanted to see this. Even more so, I wanted Henry to see it. Whenever we walk or drive past the building site of the temple we talk about how they our building our temple and he's gotten pretty interested in it.

There were so many people there to watch! Most were across the street at the courthouse where we ended up, but there were people virtually every where on the downtown corner where the temple is being built, including on rooftops of most of the buildings. 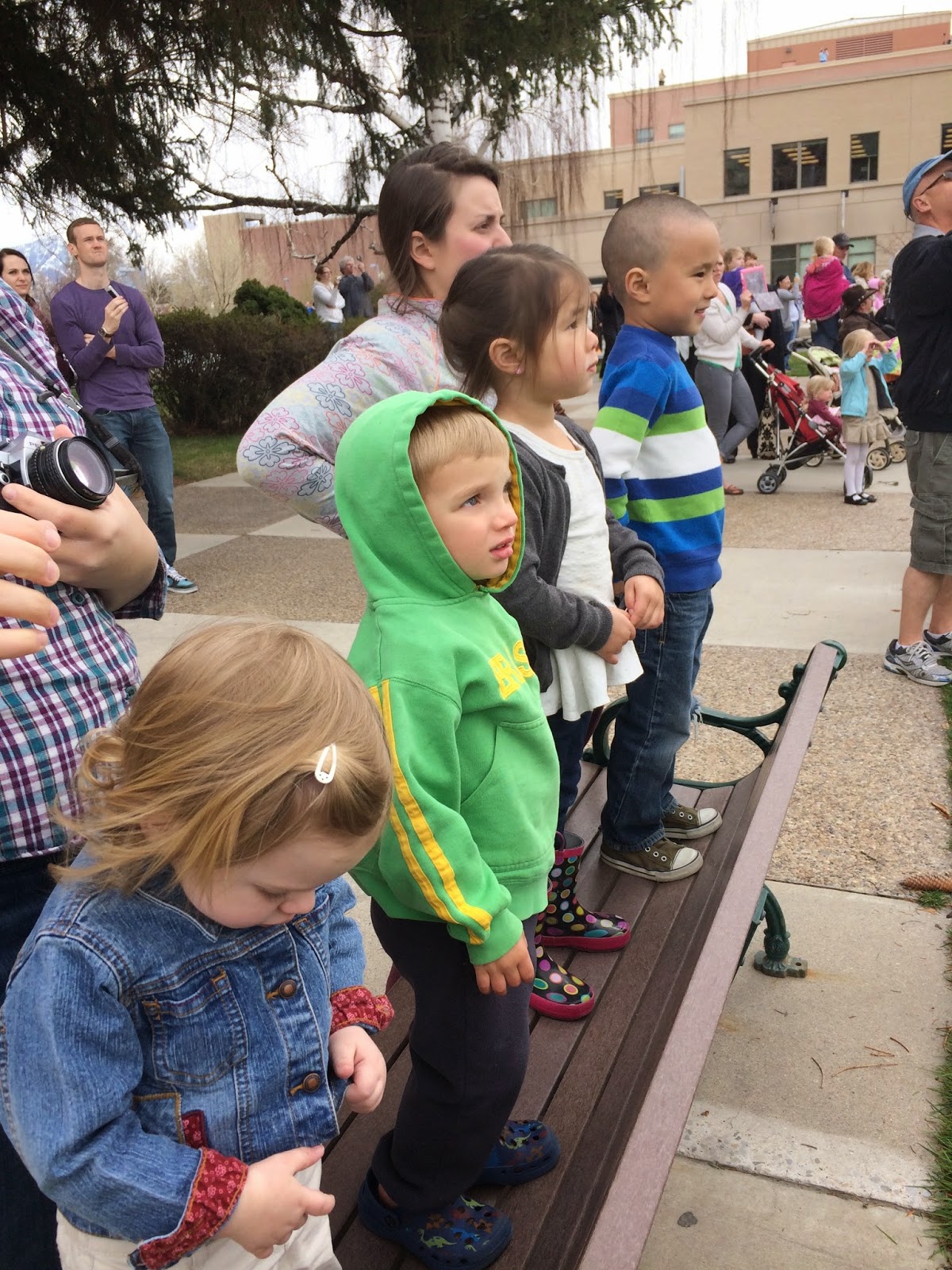 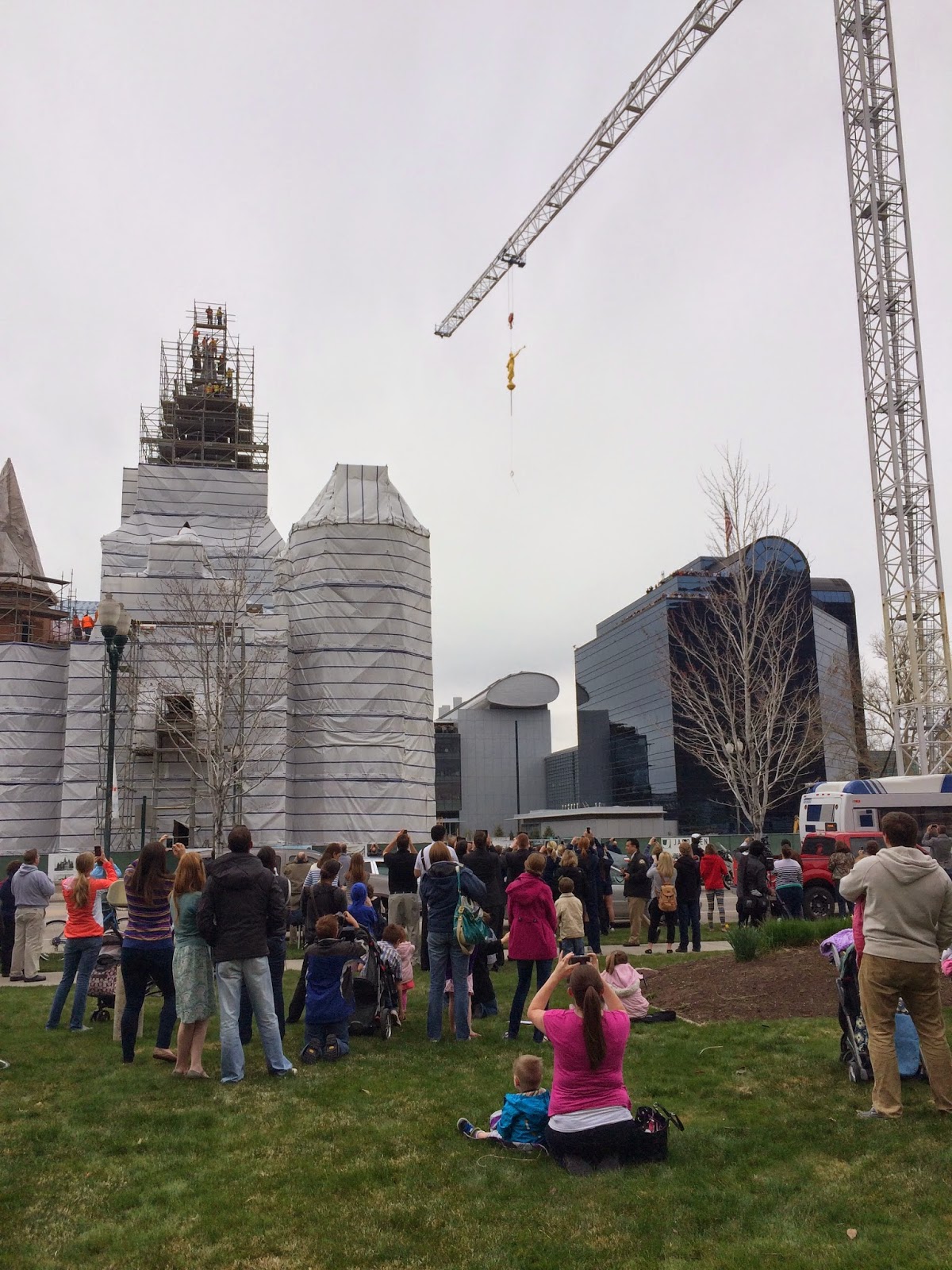 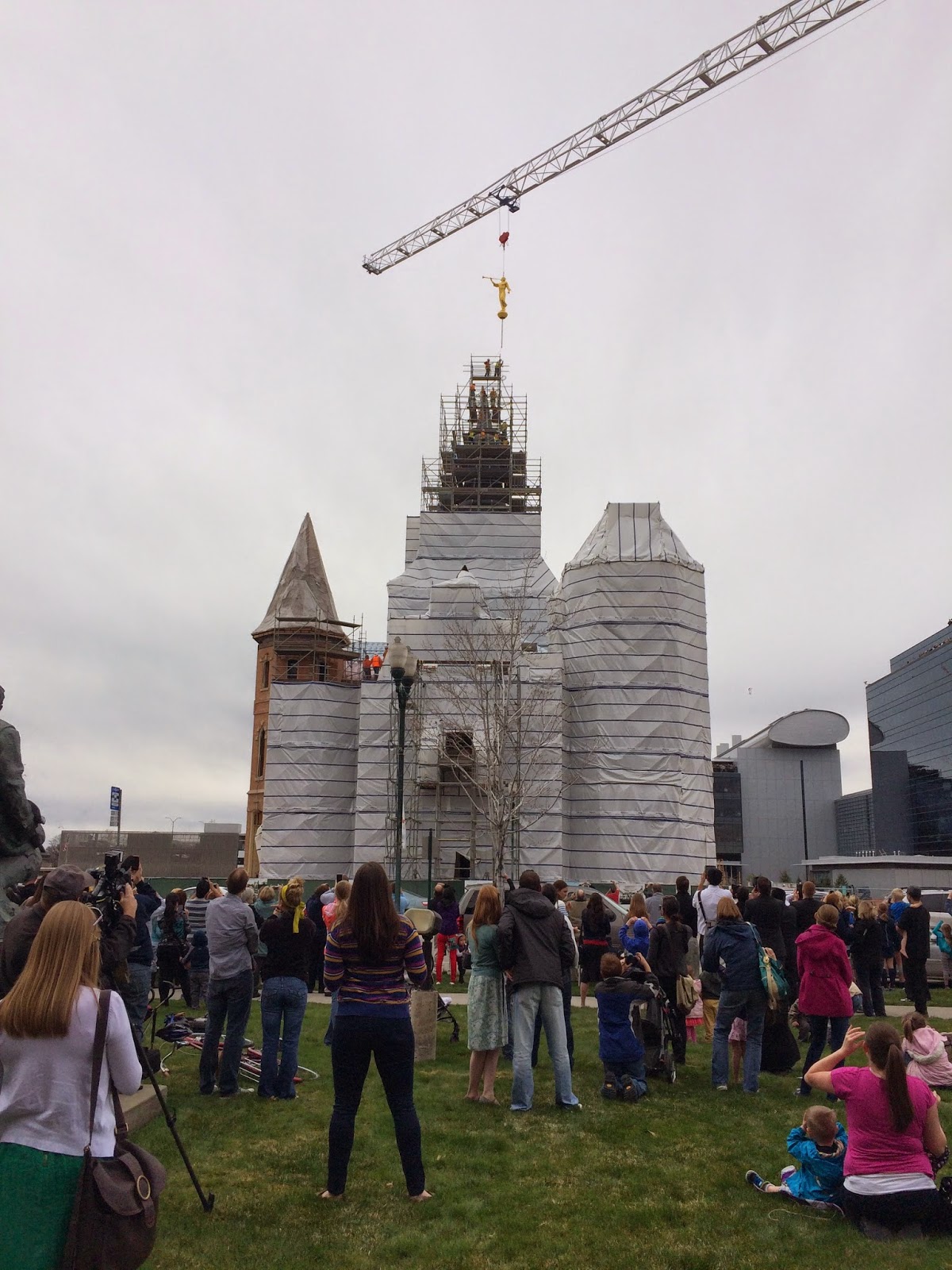 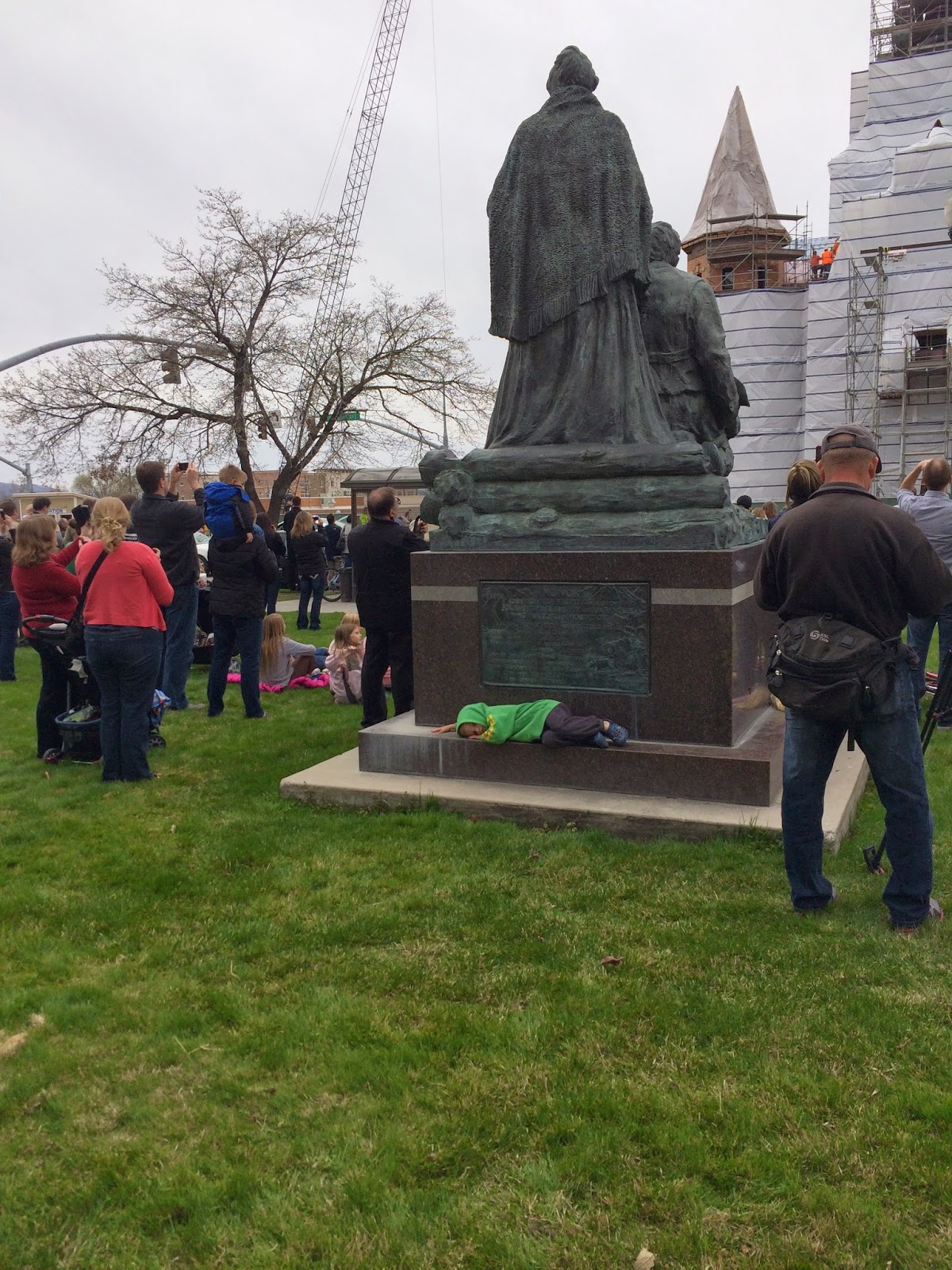 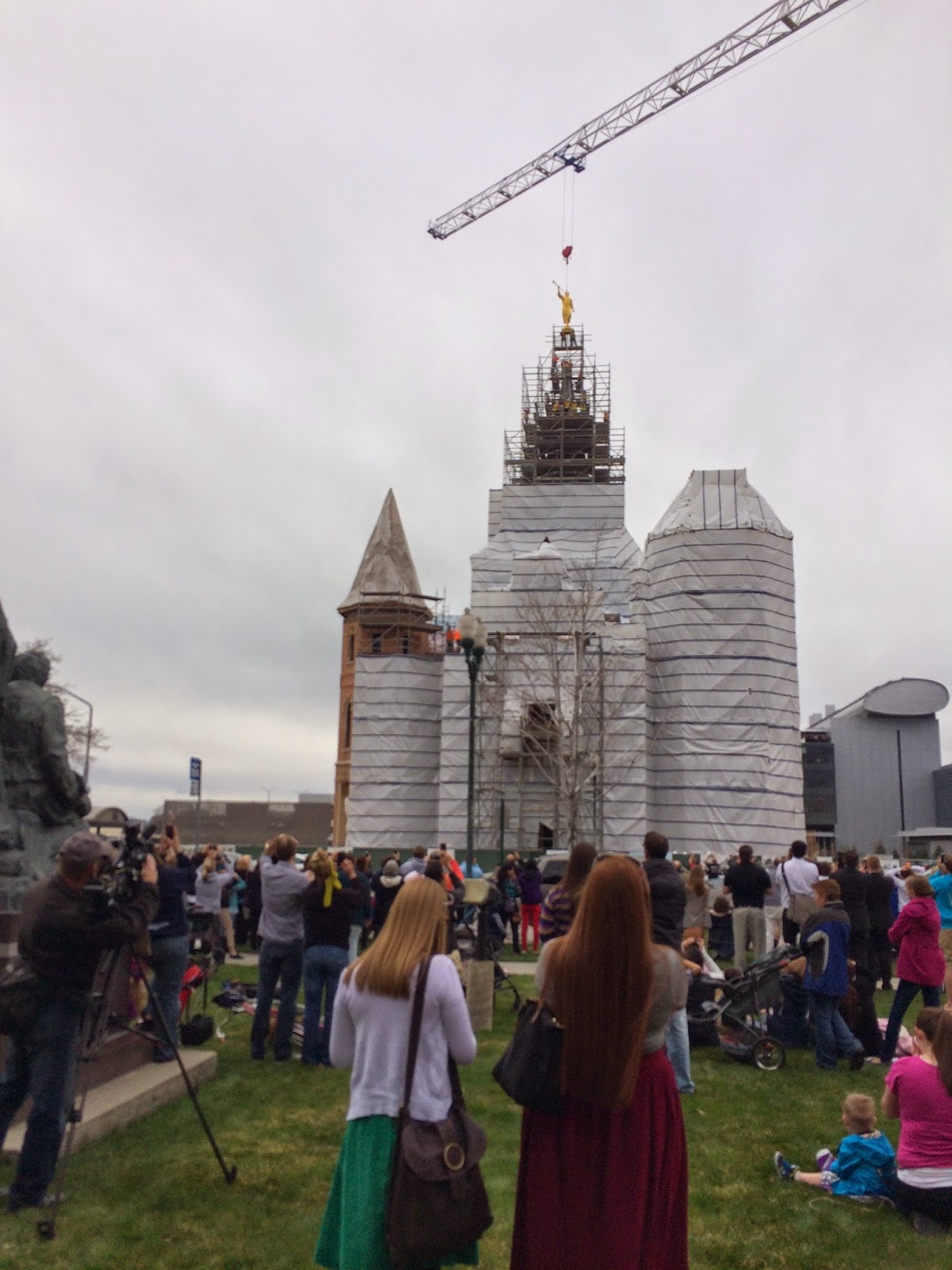 She'd rather be here than napping anyway. 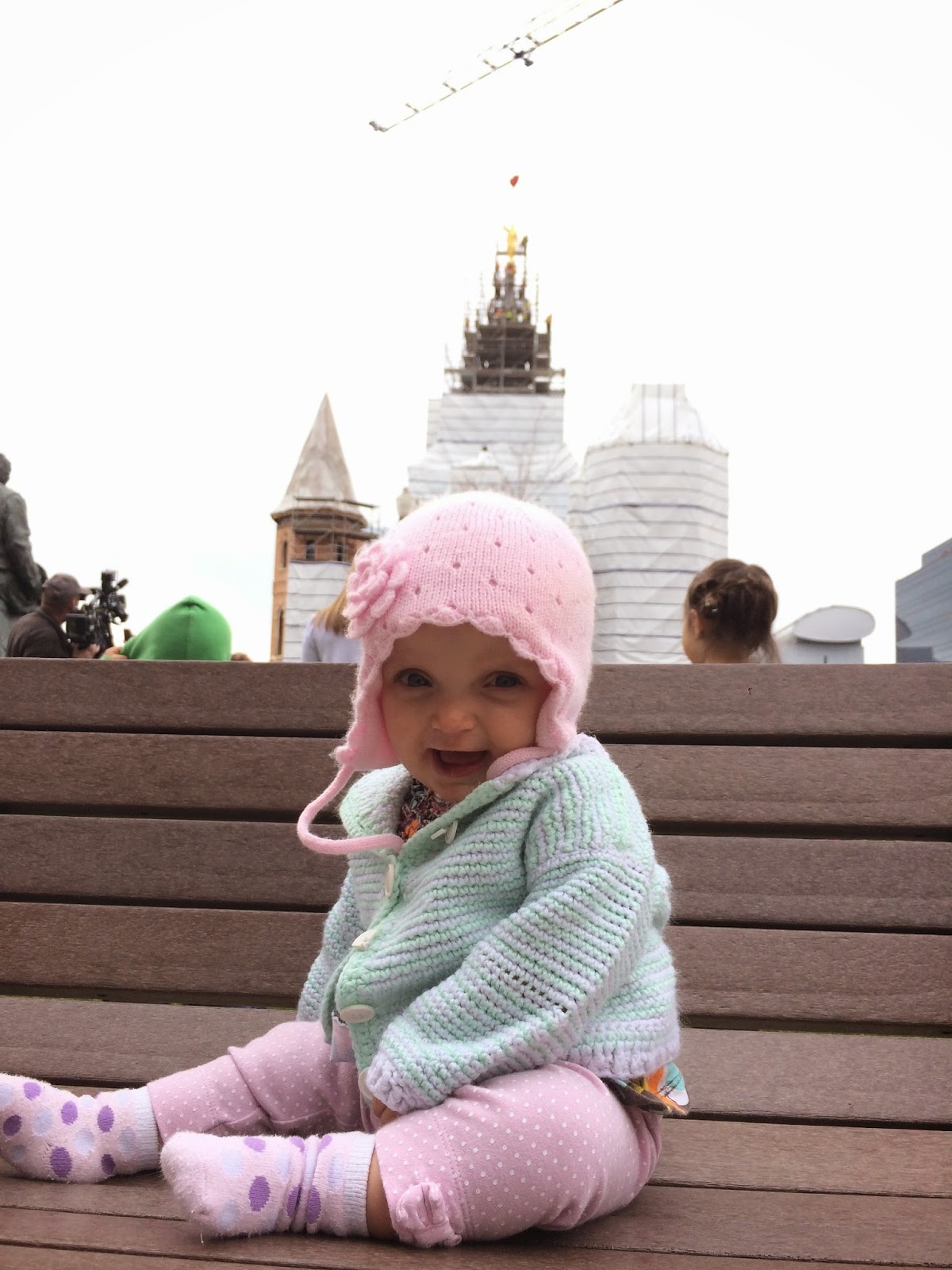 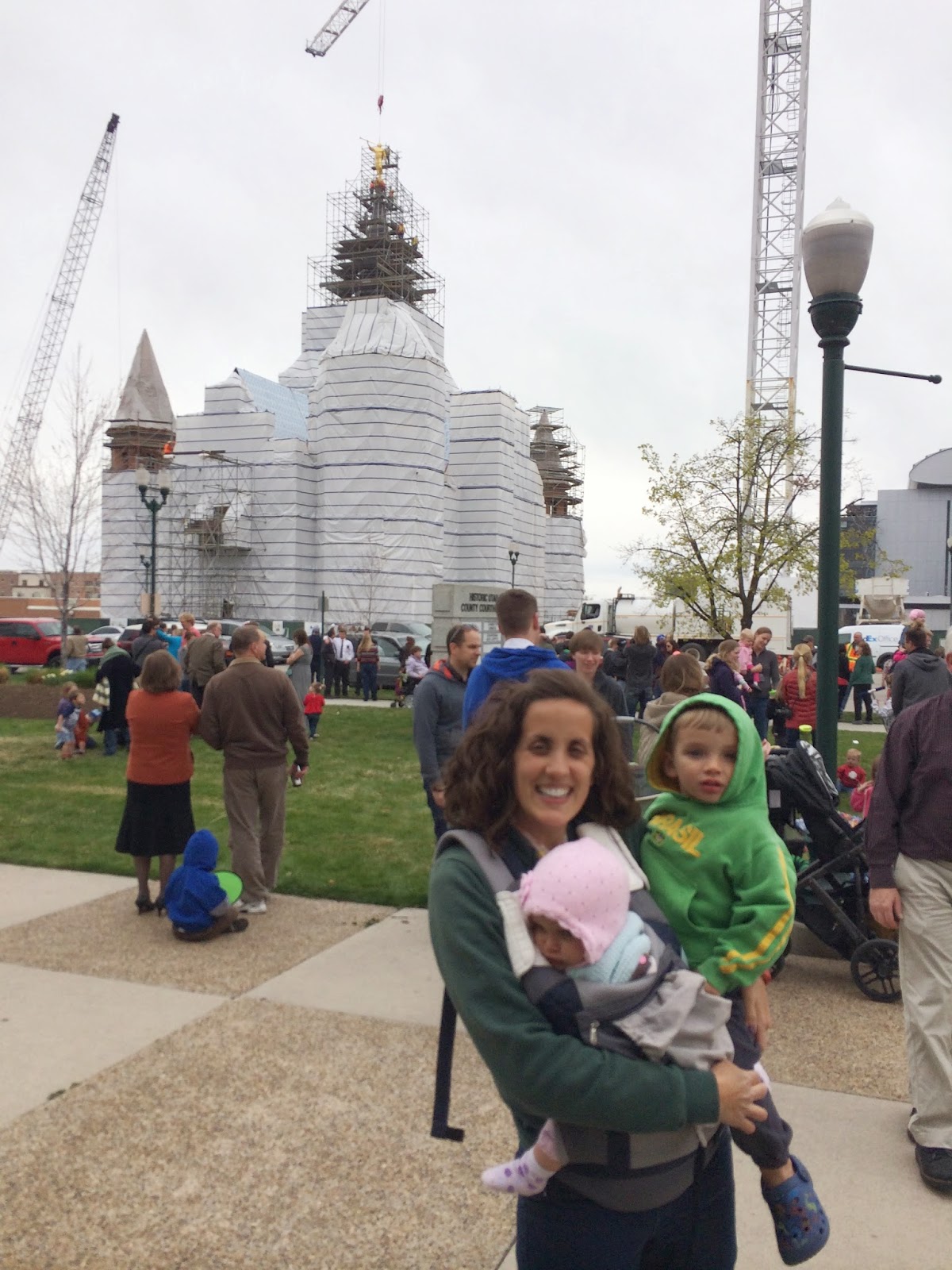 It really was cool to be part of the event, mostly to see that there were hundreds of other people who felt tied to this temple and that statue. Since then, Henry loves to find "Angel  Nanoni" on the temple. So, it was worth it!

Oh, and I got totally famous because of it: (exclusive interview with yours truly, and my friend who told me about it, at 1:45)

Posted by stephanie at 9:54 PM No comments:

Rob's parents are in town and took us out to one of the restaurants on our bucket list! They like tacos (who doesn't? No really, are there people who don't like tacos?) so we suggested 180 Tacos in Provo when we were deciding where to go for lunch.


I'll try not to make this blog post a Yelp review. But just for my own memory, we got a bunch of flavors of tacos and my favorite were the Korean bbq pork and the chili orange shrimp. I definitely want to go back to have more of each of those plus try some new flavors. I texted both my dad and my brother while we were there to tell them they would have to go with us when they each come into town.

Then there are these, sweet chili wonton chips. I mean, have you ever heard of such a thing? Brilliant. 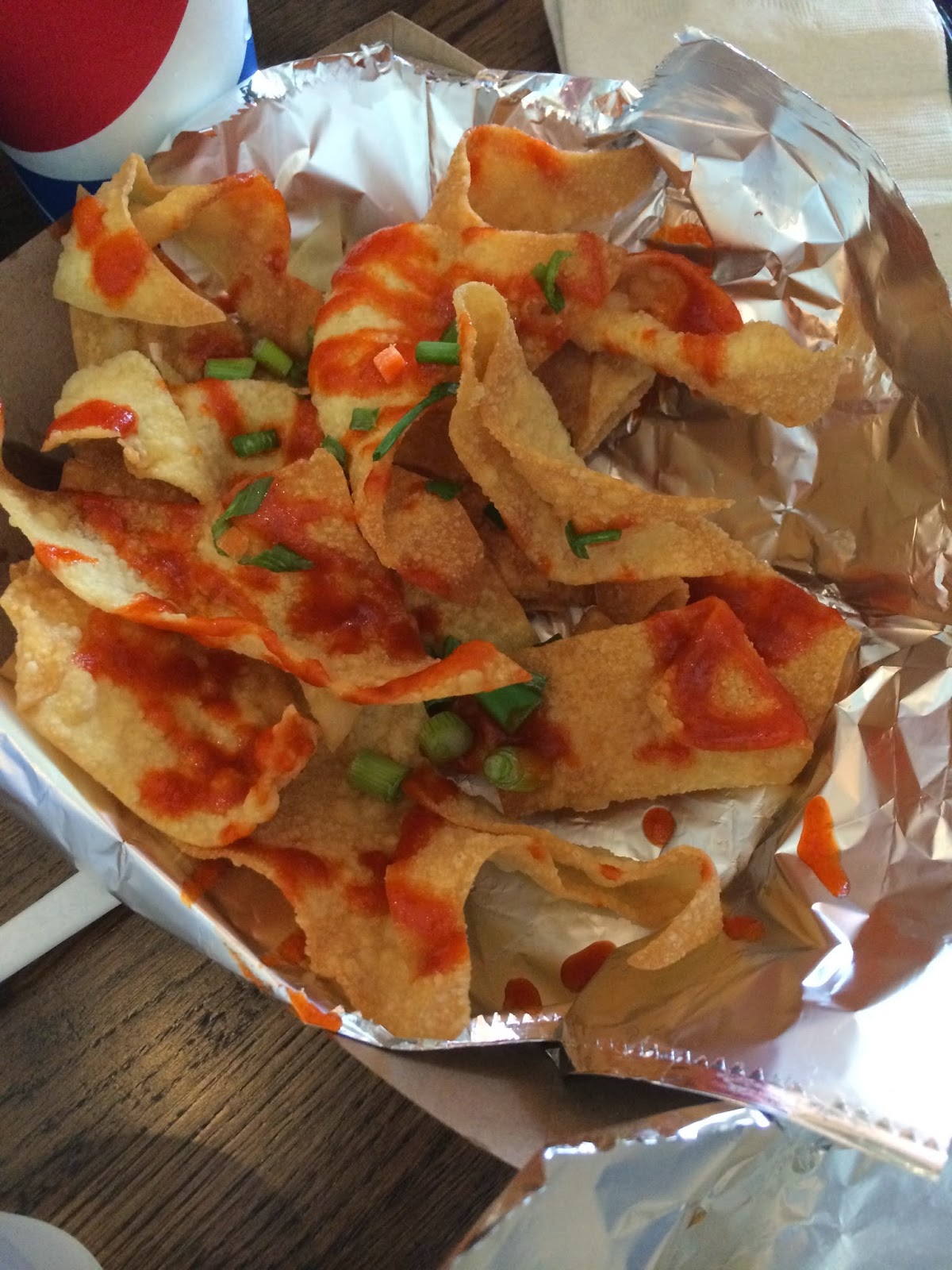 Hey June, hands off my tacos! 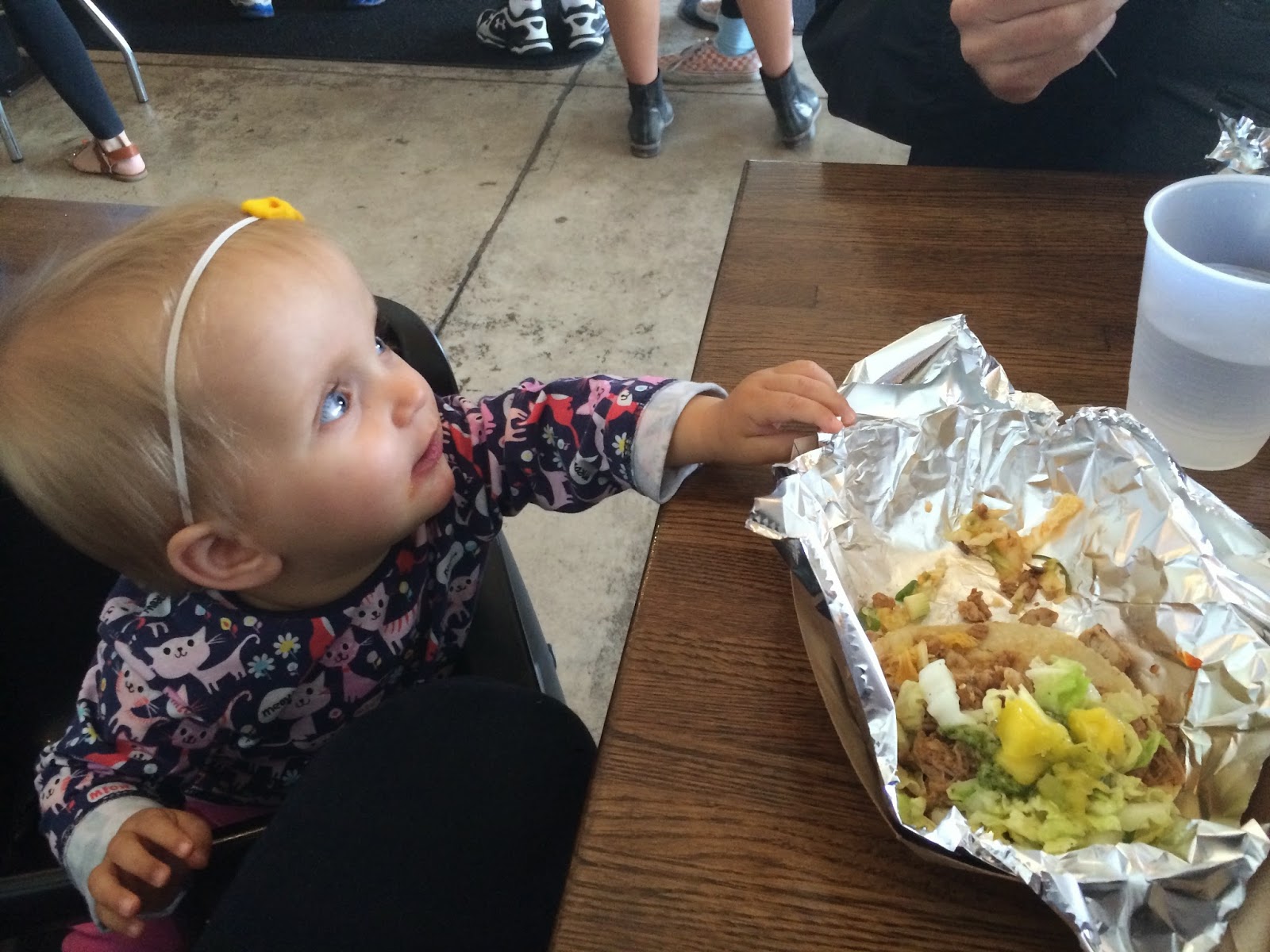 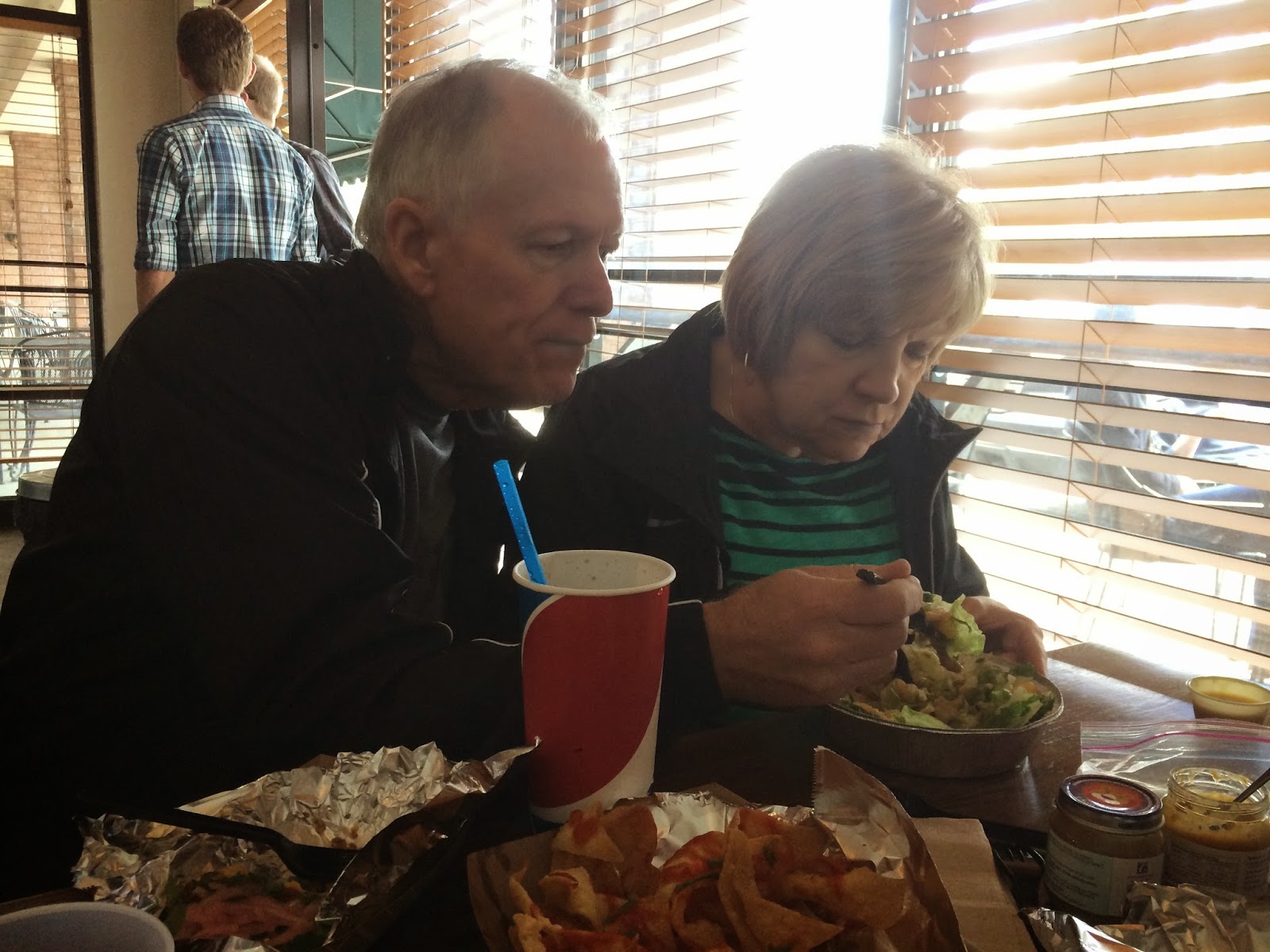 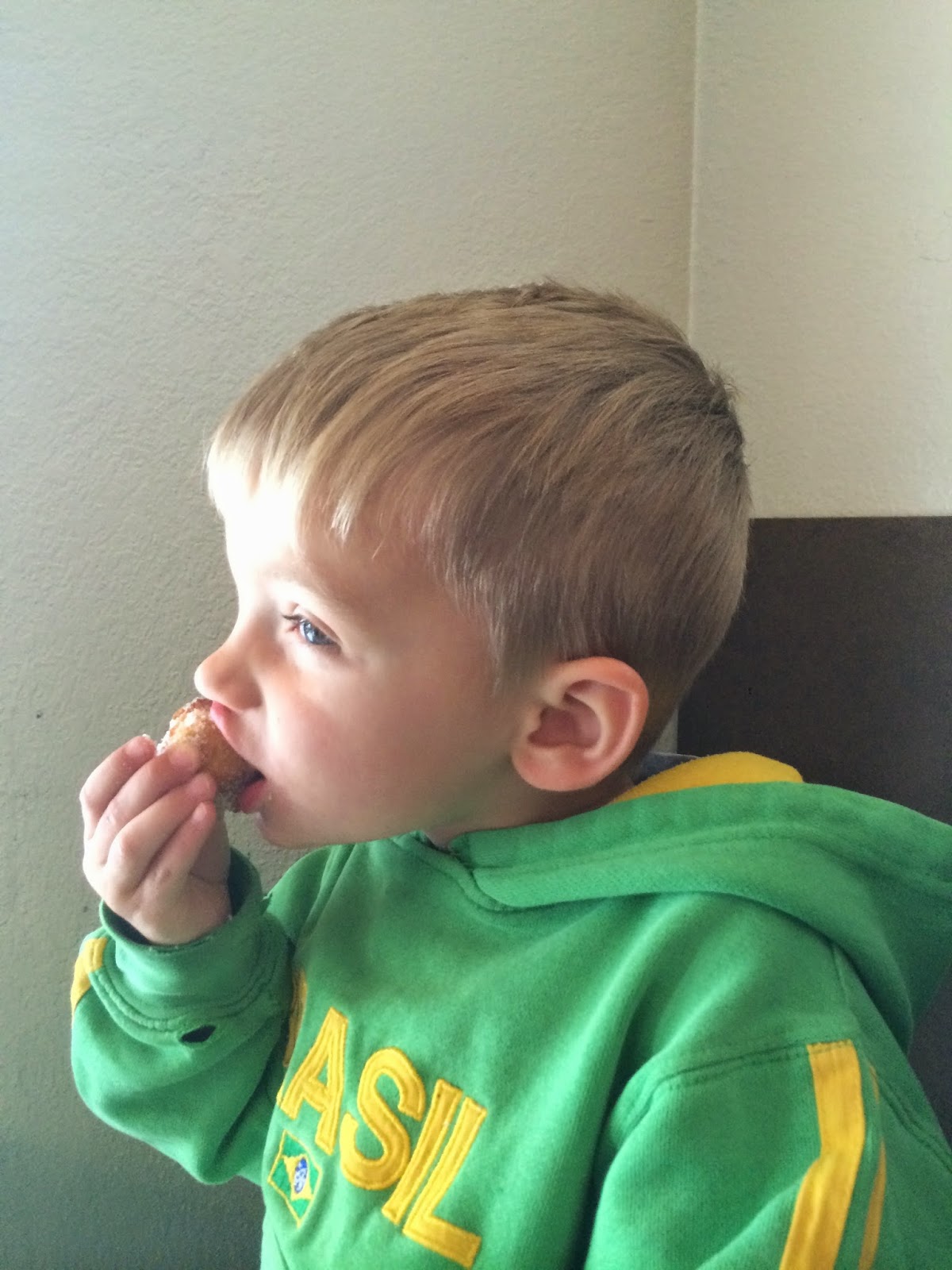 The party and our tacos + 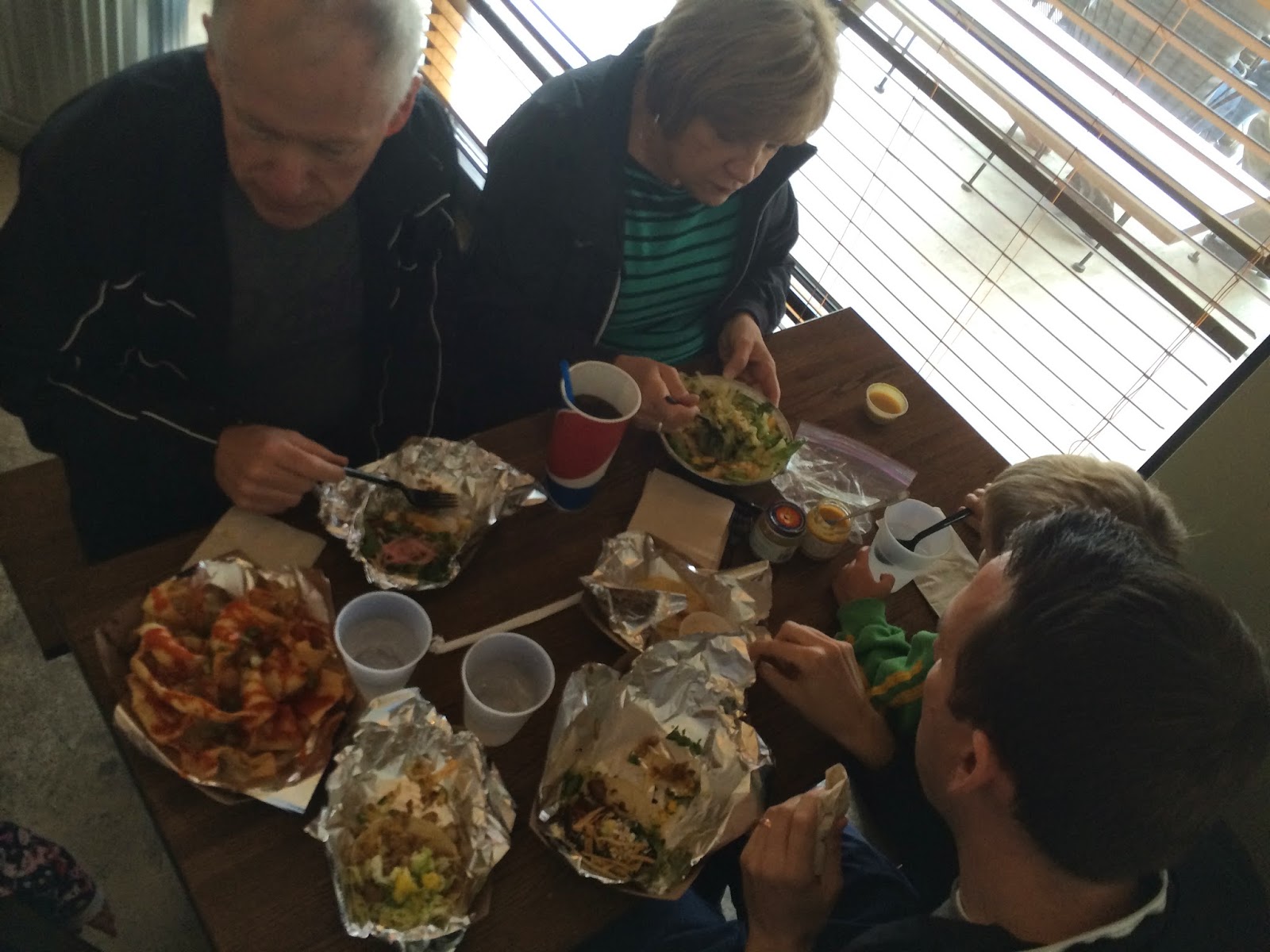 Thanks, Jerry and Linda, for our lunch and for helping us check off another bucket list restaurant!

Posted by stephanie at 9:18 PM No comments: