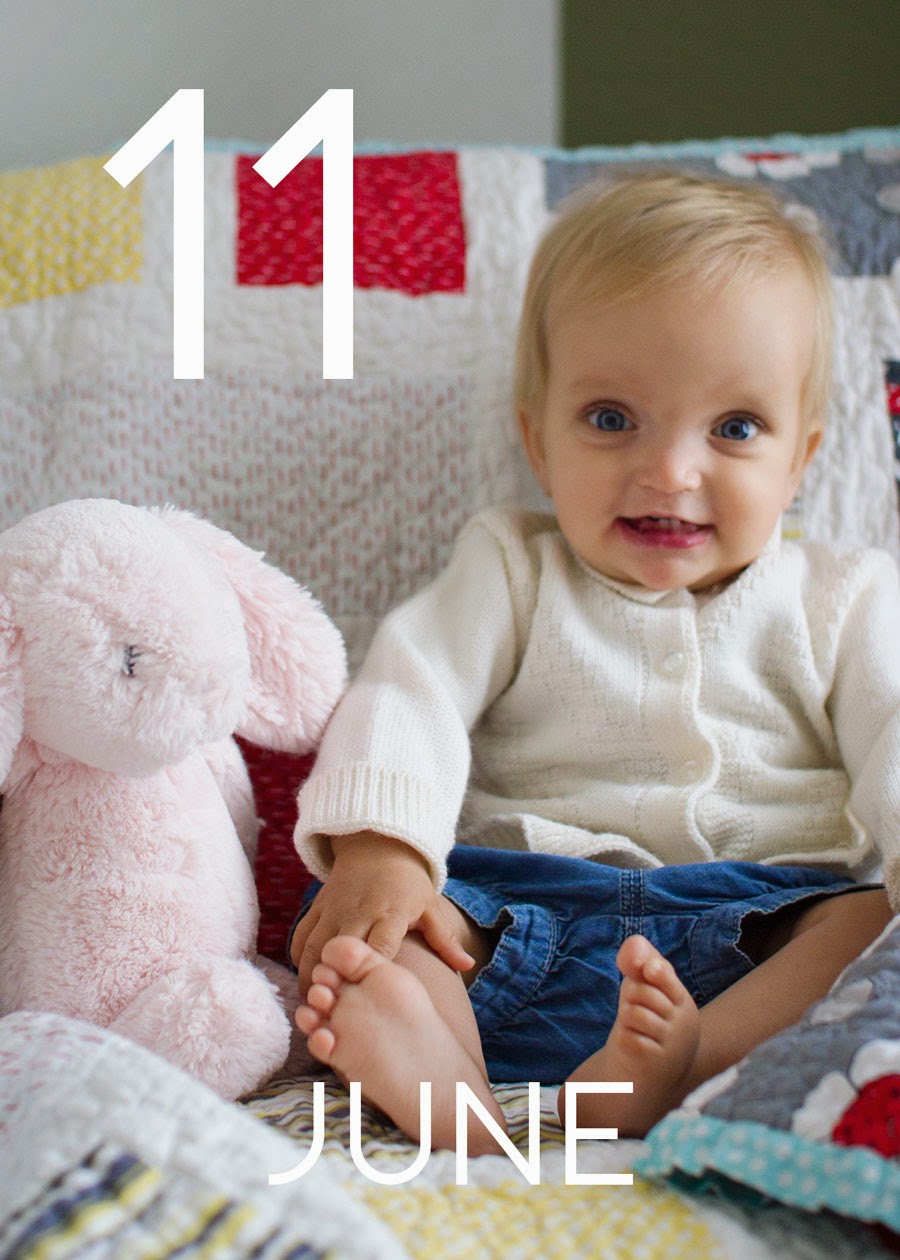 June in June! I've been waiting for this month to see what it's like to have a baby named after the month we're in. And now I know...it doesn't make a difference.

A day or two after I posted her 10 month update about not crawling - she started crawling. So, she never scooted, army crawled or any other version of a pre-crawl. She just crawled. I forgot how annoying/entertaining it is to have a crawler around the house. It's really funny to me that I lose her ("she was just here, where did she go?") but it's, of course, more work to keep her safe from falling down stairs, off beds, or from accessing choking hazards.

Yes, she's fallen off my bed. And she even fell out of her crib recently (oh, maybe even the day after falling off my bed). So sad. One day she stood up for the first time in her bed and I noted to Rob that it was time to move her mattress down, but that she still wasn't tall enough to fall out, probably. Wrong. The next day during her nap I went in to get her out of bed because she never fell asleep, only cried. When I opened the door she was right there, I hit her! Talk about adding insult to injury: first she climbs/falls out of her crib then her mom hits her in the head with the door. Thank goodness I opened the door slowly. Needless to say, Rob lowered her mattress right then. I still don't understand how our non-climber climbed out (I've never seen her do anything that resembles what she somehow managed in order to get out) nor how she didn't injure herself. I cried when I thought about how scary it must have been for her and how that day could have been much scarier for all of us.

June has turned into a little bit of a drama queen. She too quickly cries when her brother barely hurts her or if she accidentally gets bonked or bumped in anyway (I'm realizing how ironic this is, complaining about her drama when the paragraph above I feel like I neglected her for an actual big accident - maybe I should be a little more sympathetic?). She's gotten a lot more clingy with me just like her brother always has been and in ways she never was before. Tired or sad - she needs me. She has also able to communicate when she does or doesn't want something. If she wants it (usually food, especially a drink) she screams, and if she doesn't want it she'll take it from you then throw it down. Or, in the case of one of us coming near her when she's upset, she bats us away with both arms. I'll be honest, the drama is a little hard to deal with but it's also amusing. If she's especially hard to handle when she's 4, 5 or so on, I'll be able to trace it back to when she was 10-11 months old.

We take June to Seven Peaks water park frequently and she enjoys splashing and crawling around in the shallow part of the kiddie pool. She has been awesome so far at falling asleep at the park, so we're able to be there a few hours during her afternoon nap but she still gets it in. She's gotten quite tan in the sun! Strangers and friends used to comment on her big eyes, now everyone is talking about her dark skin. Her hands and feet are especially dark. Too bad the picture above doesn't show it.

She's got a total of four teeth, I think the last two, those on the top, have come in since the last blog update. Her top teeth are spaced and her buck teeth sure are adorable.

We sure love you June! I can't believe next month you will be one years old!

Provo is for families: Book festival and AstroFest

If Virginia is for lovers, Provo is for families. There have been a lot of days where Rob and I look at each other and remark how great it is to be living here, especially with our young family and especially on Saturdays. There's so much to do and it's a great little-ish town to do them in. Before I share pictures from one particular family-fun-filled Saturday, here's an example that struck me when we first moved to Provo. In Kirkland, where we lived before, each library has one story time for Henry's age group. Here in Provo, there are 14 a week! (three mon-thurs and two on friday). That's just for his age group, there's just as many for babies and for preschoolers. There's just a lot of kids here (#mormons).

May 17th was one Saturday like many others where we just have a lot of fun, provided by the place we live. In the morning Henry and I went to a book festival at the library. I was so impressed with the theme and how it was executed, I was even kind of jealous of all those who were part of the event's planning and carrying out (that was a strange feeling for me - but I've been feeling a little under-utilized here in Provo, but that's an example of what's not great about living here and a topic for another day).

Henry was able to view a cool model train, use a typewriter, dance (?) around a maypole, choose a free book, go through a mouse maze, make mouse ears, listen to a dramatized book reading, watch pet mice, and enjoy a cheese and crackers snack. The best part was enjoying the event with just my boy, which happens rarely. 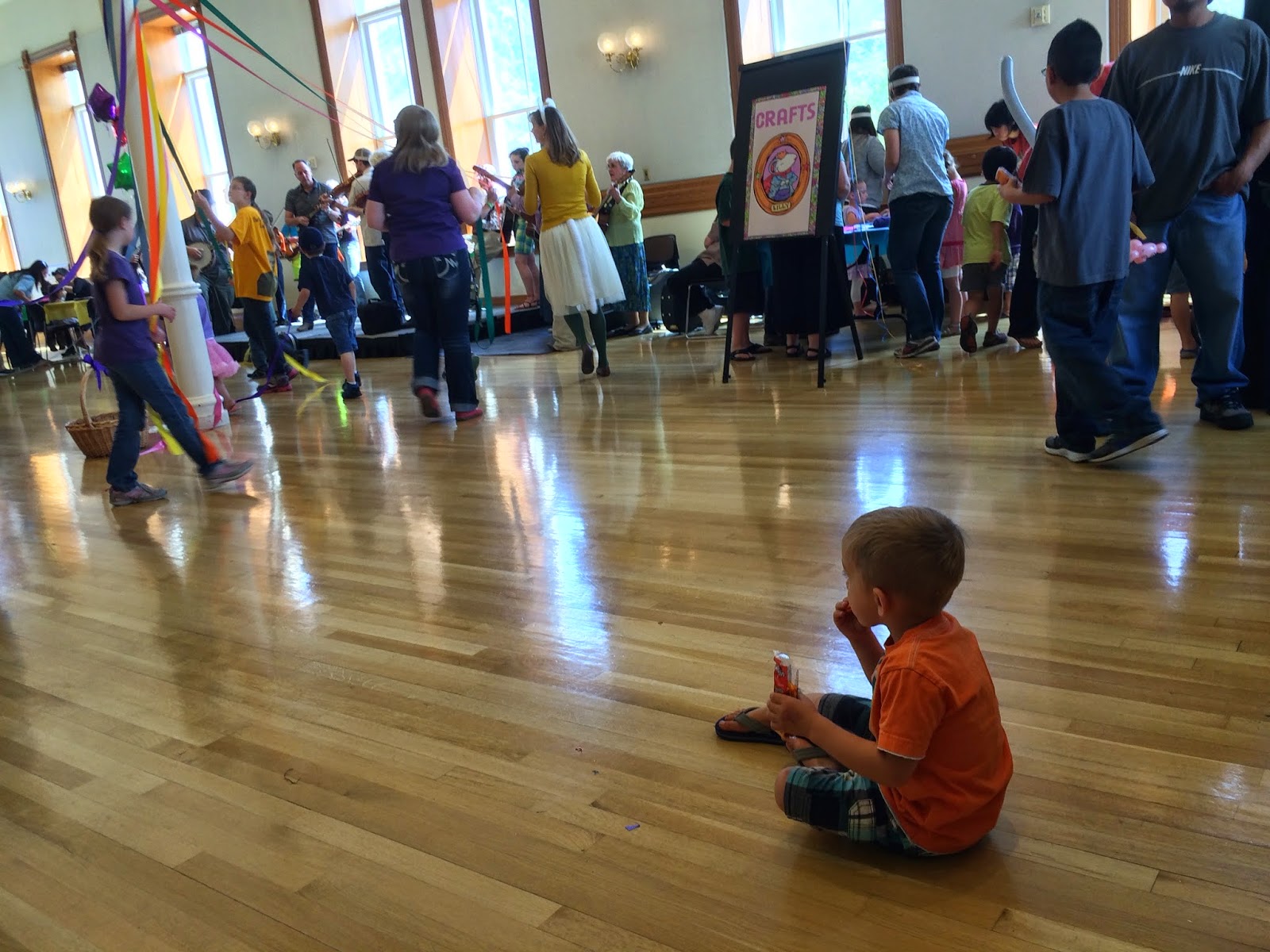 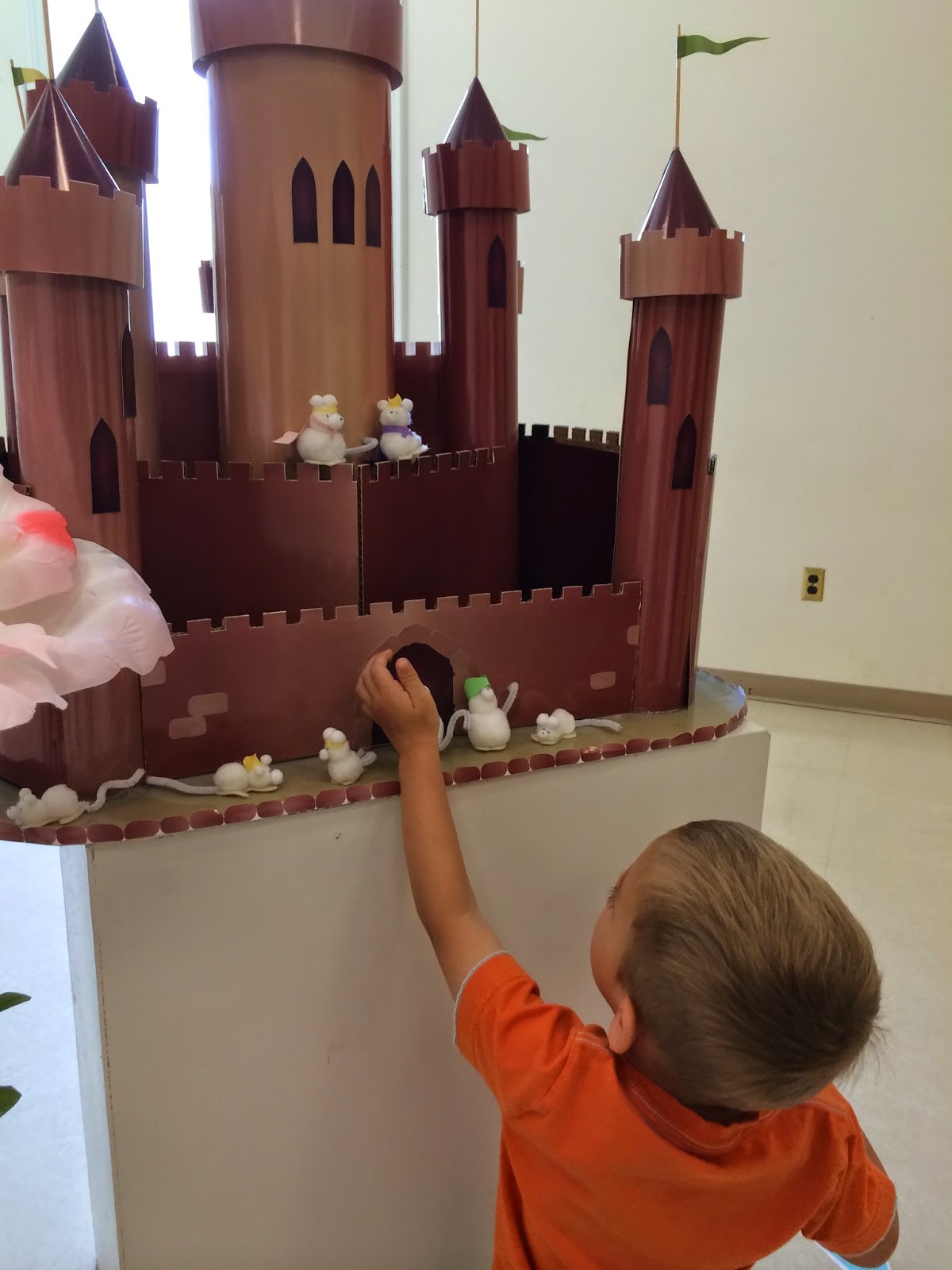 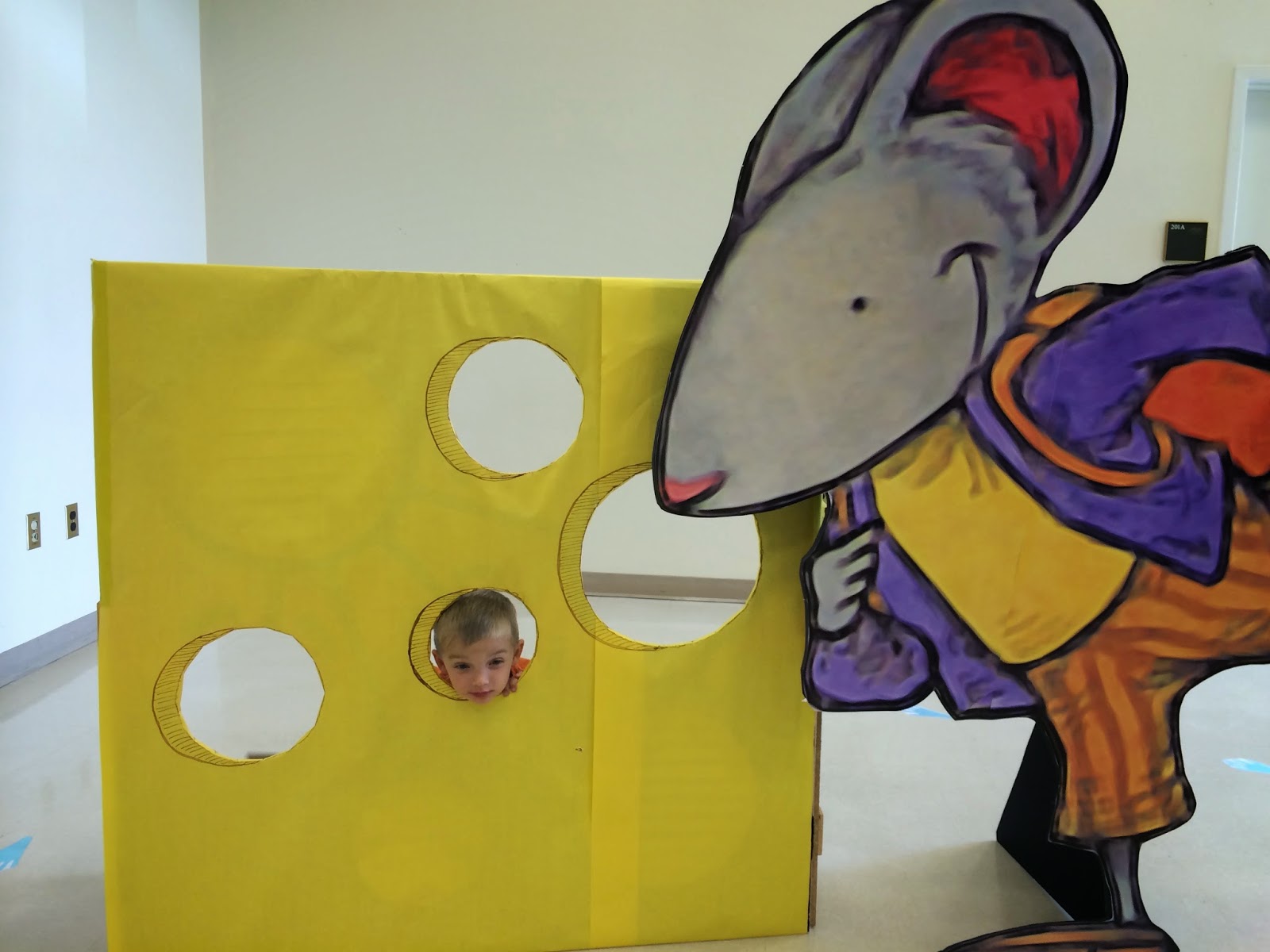 After we got home from the library we ate lunch then all headed to campus for BYU's annual AstroFest, a family and scouting day put on by the physics and astronomy department. So this event was arguably a lot cooler than the library event and Henry still talks about it.

Viewing the sun on the roof of the Eyring Science building, where everything took place. 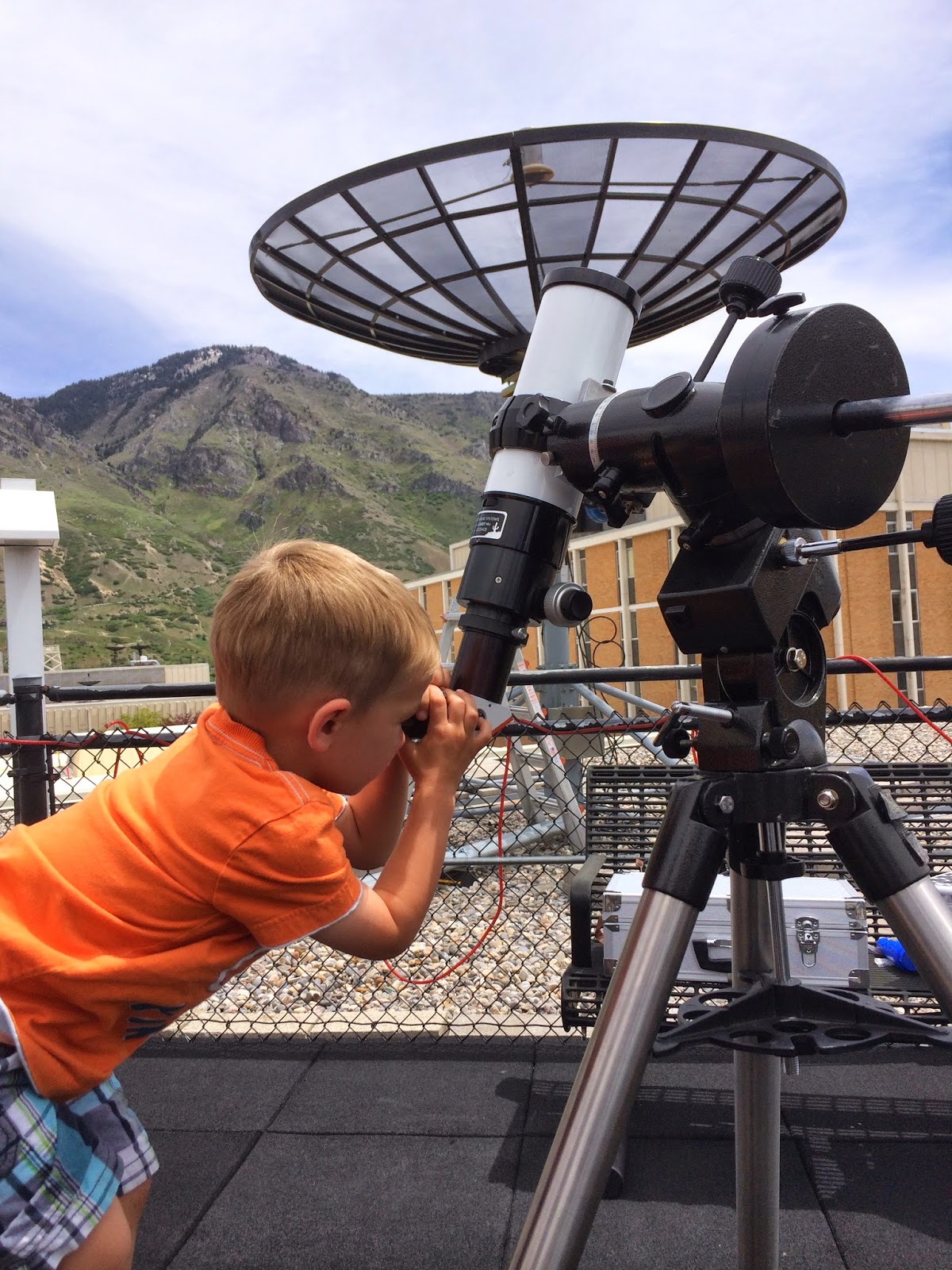 Venturing through exclusive parts of the building... 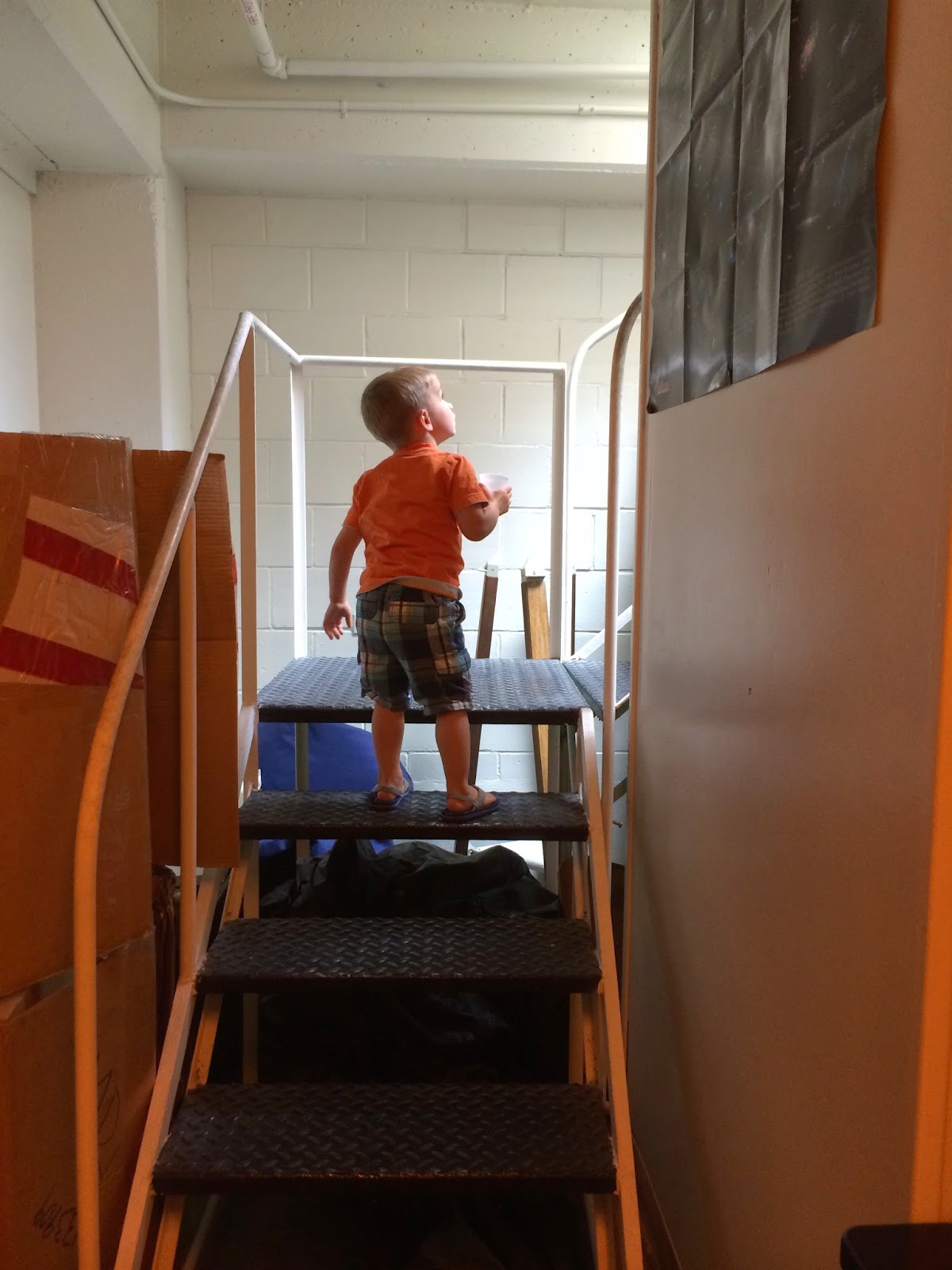 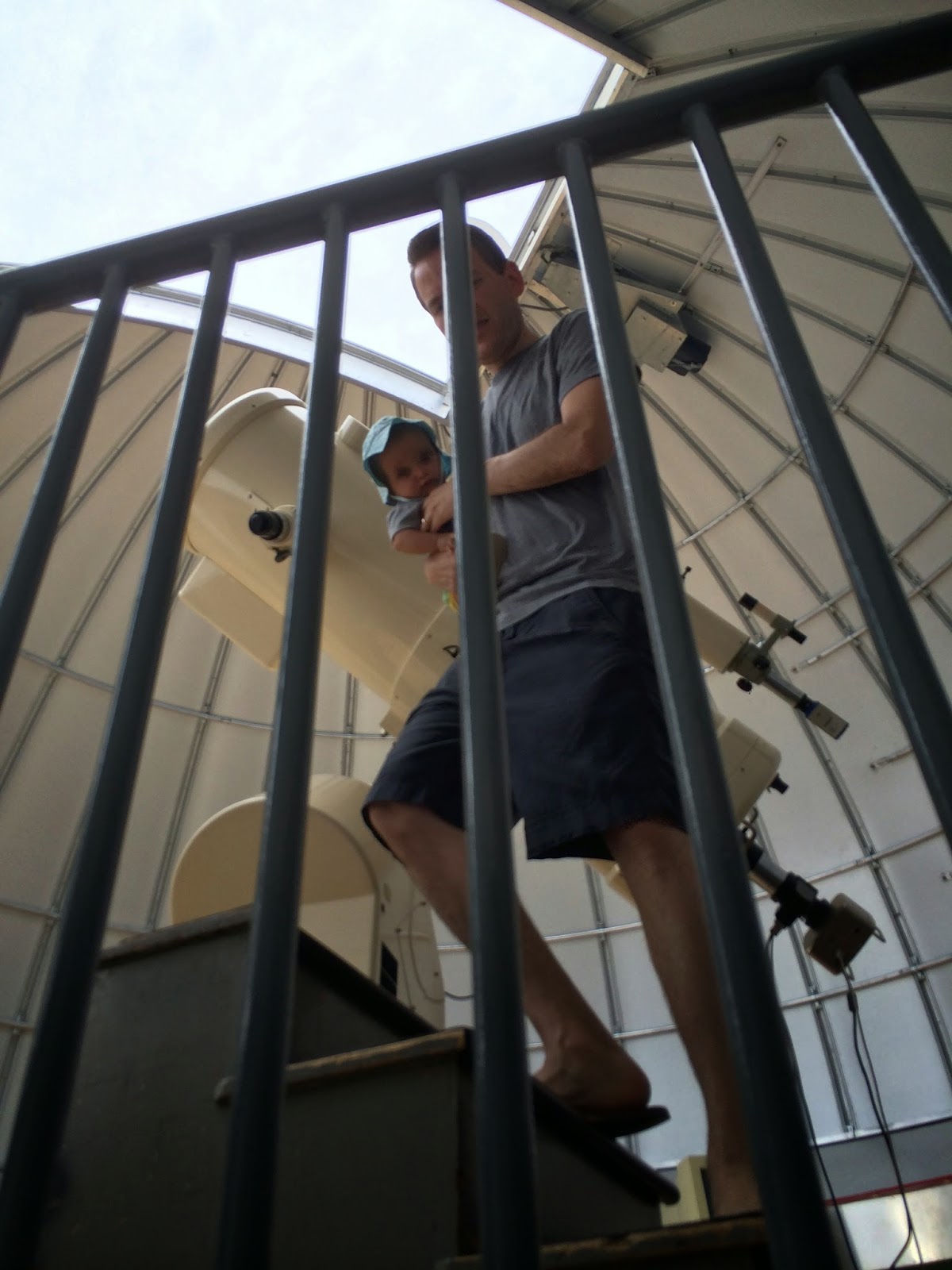 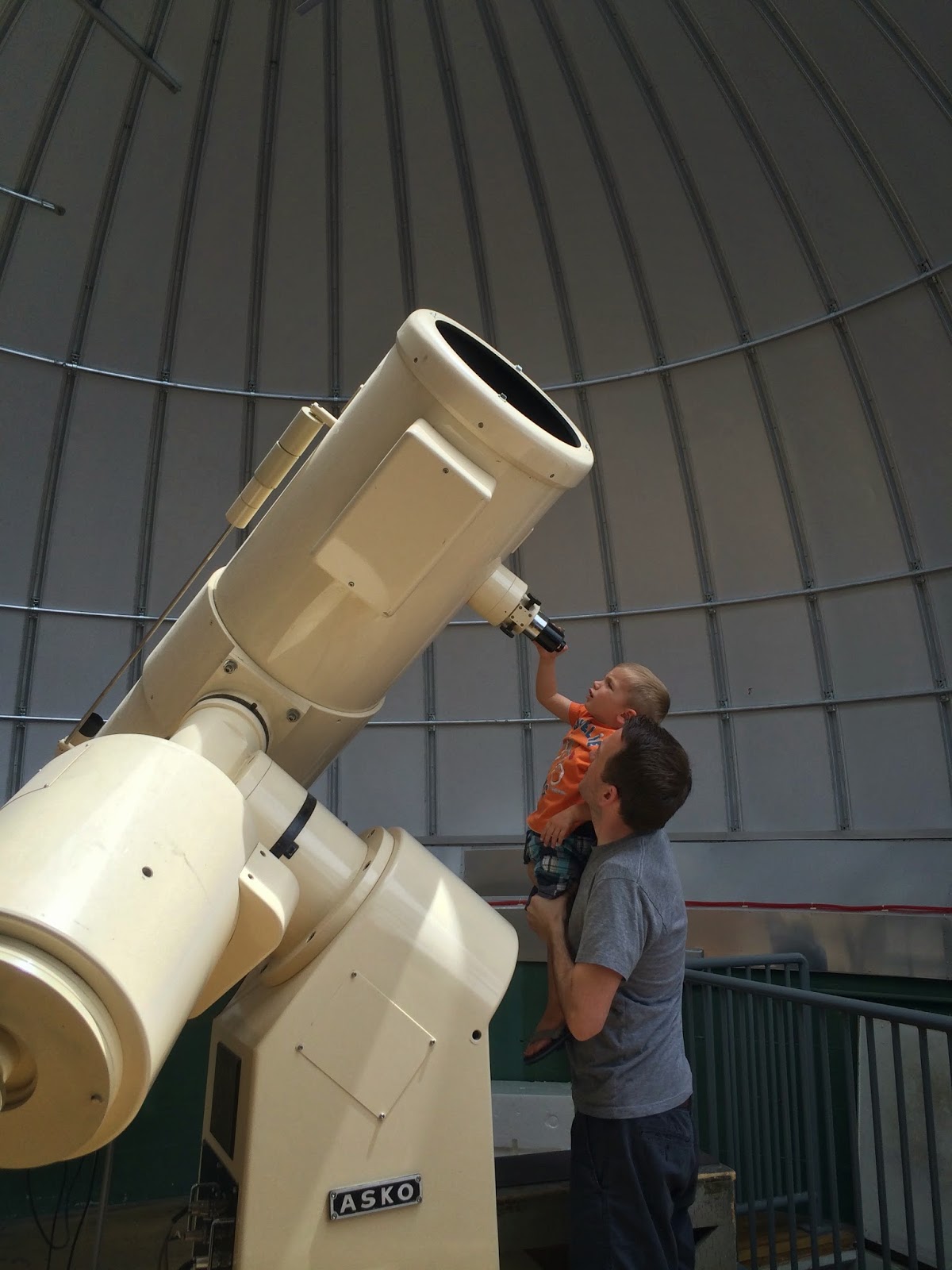 And my proud mama/geeky former BYU portion of the day - Henry is participating in an acoustics demonstration in the very same classroom I took an acoustics class in years ago (oh, and also a New Testament class... only at BYU)! 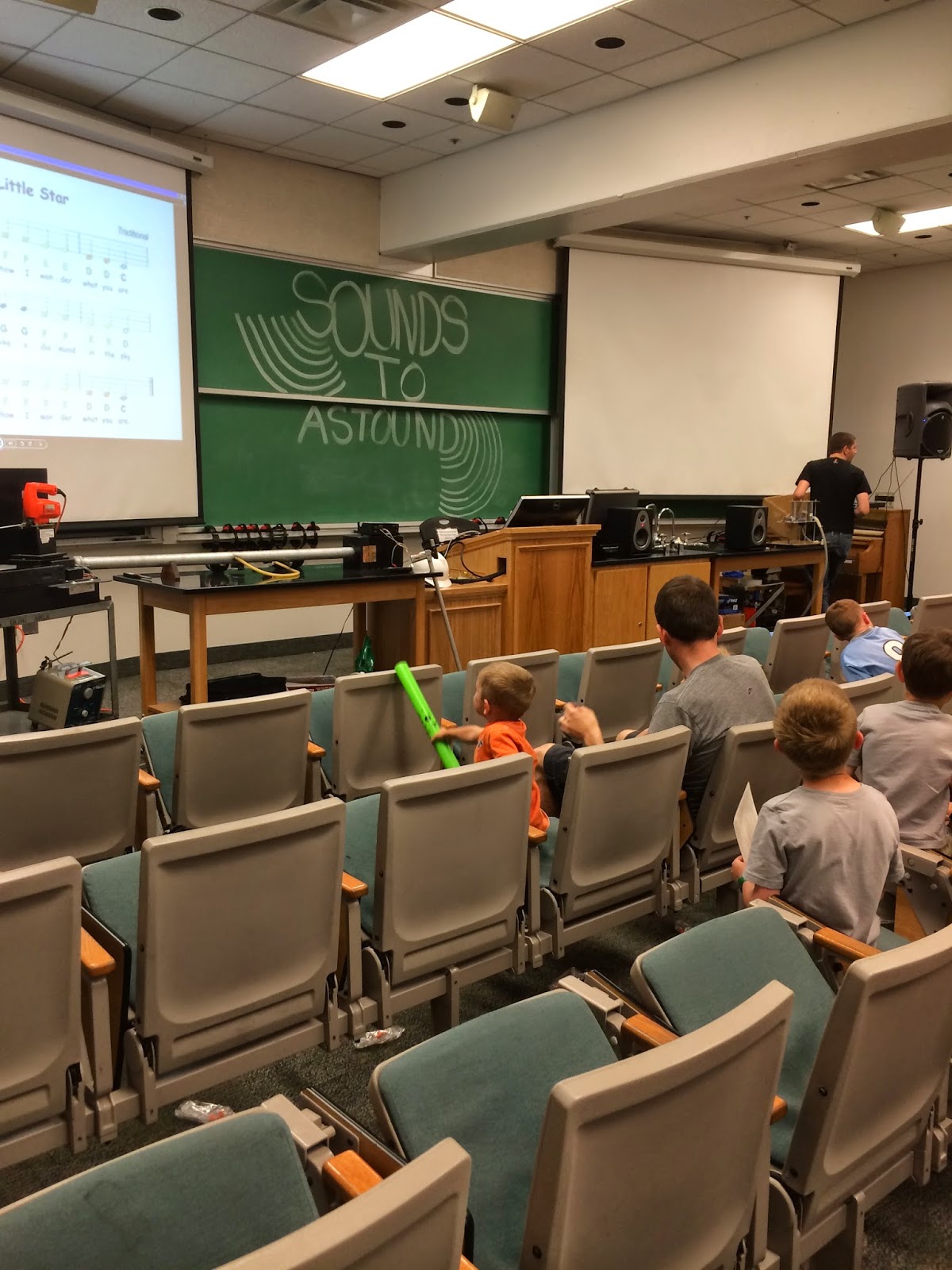 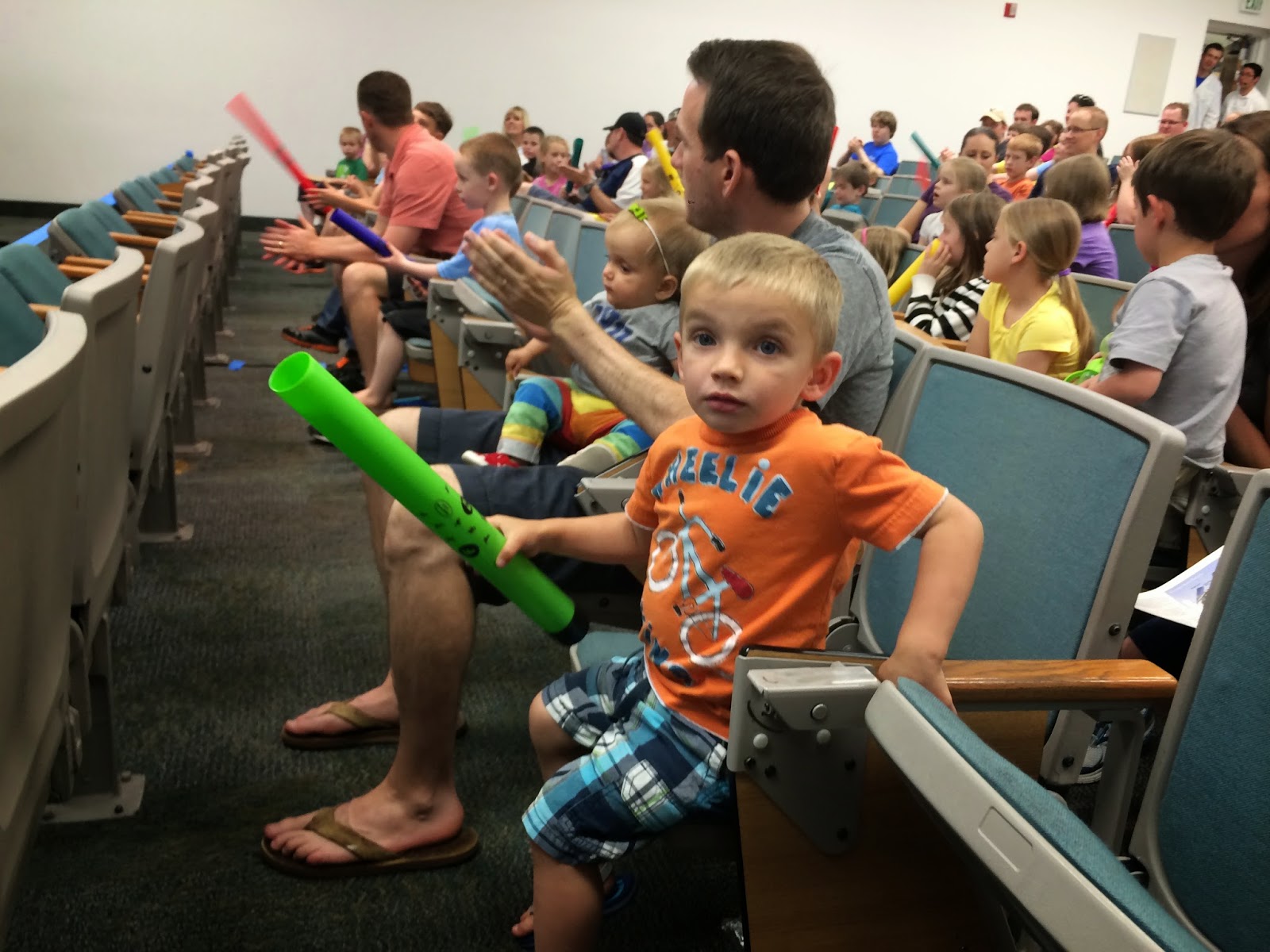 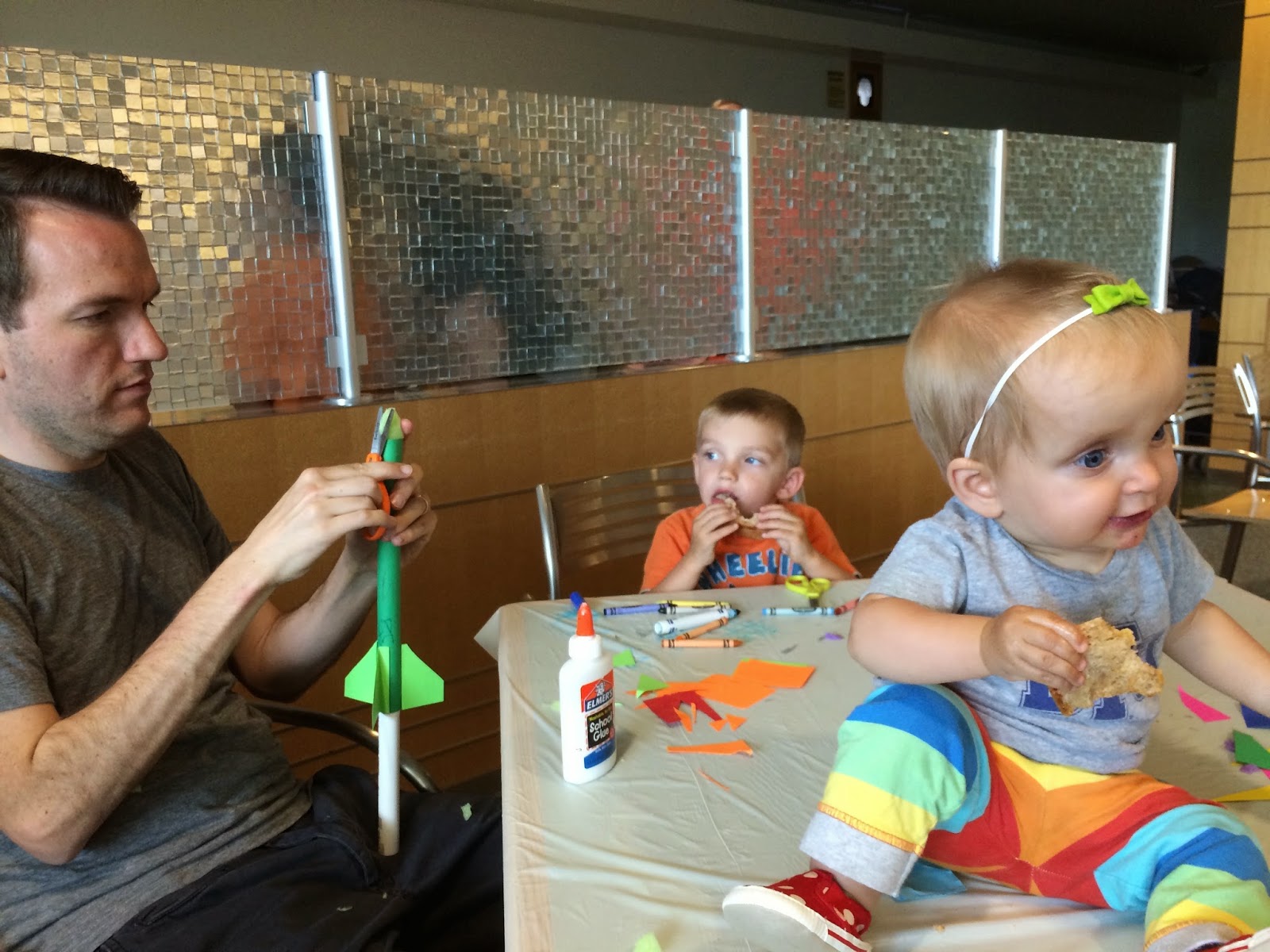 About to launch his rocket. Oh man, he loved this! 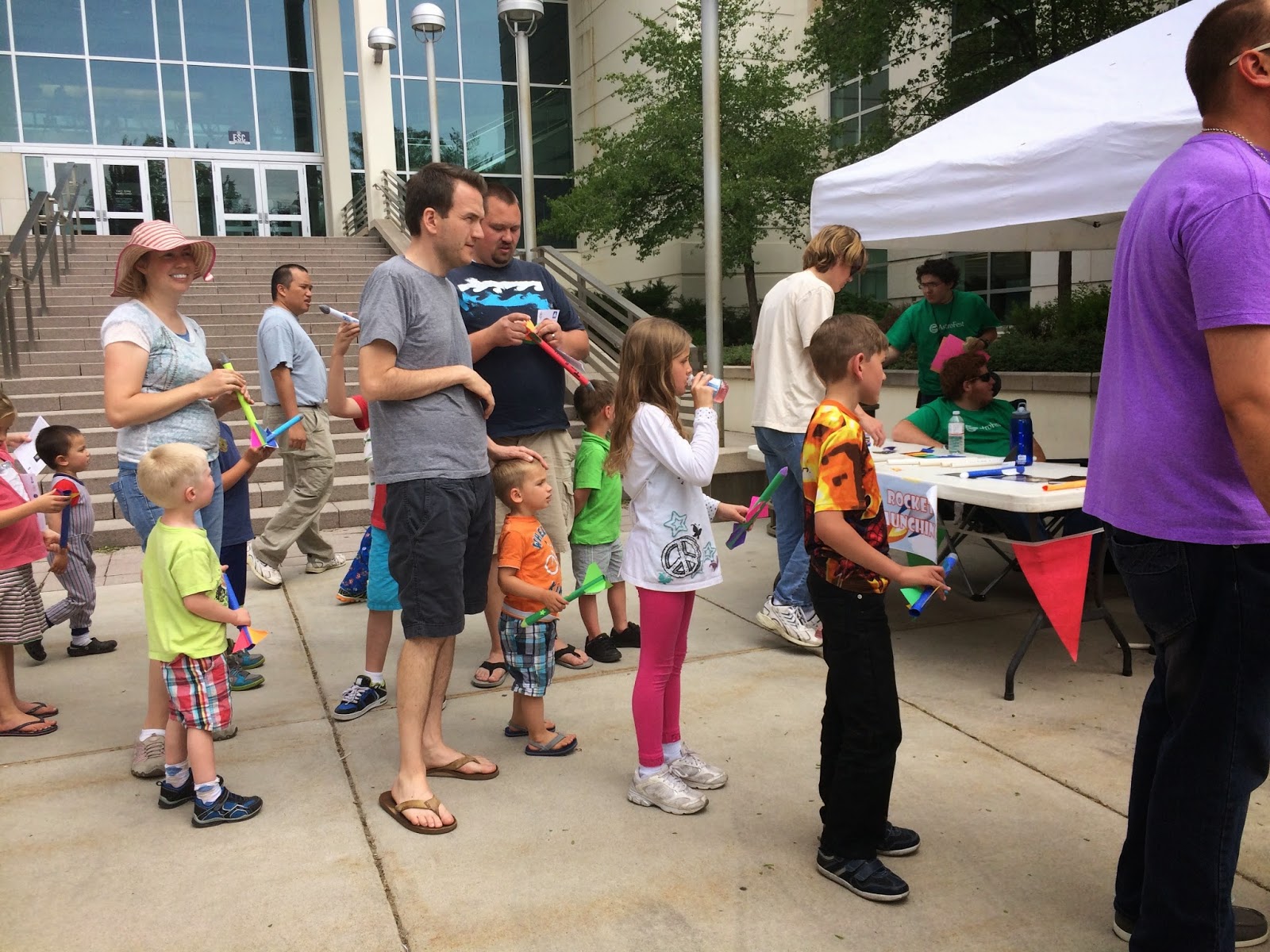 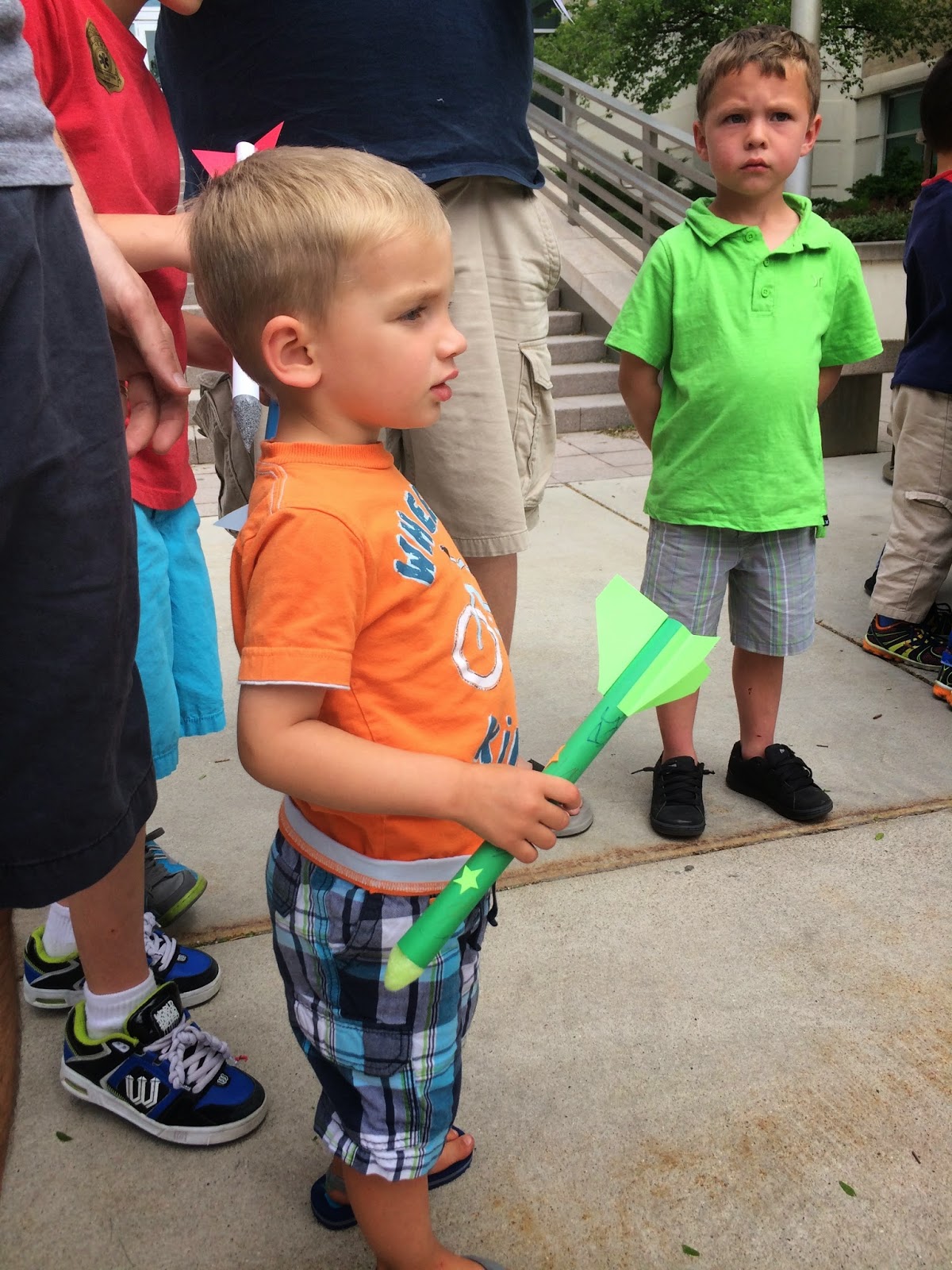 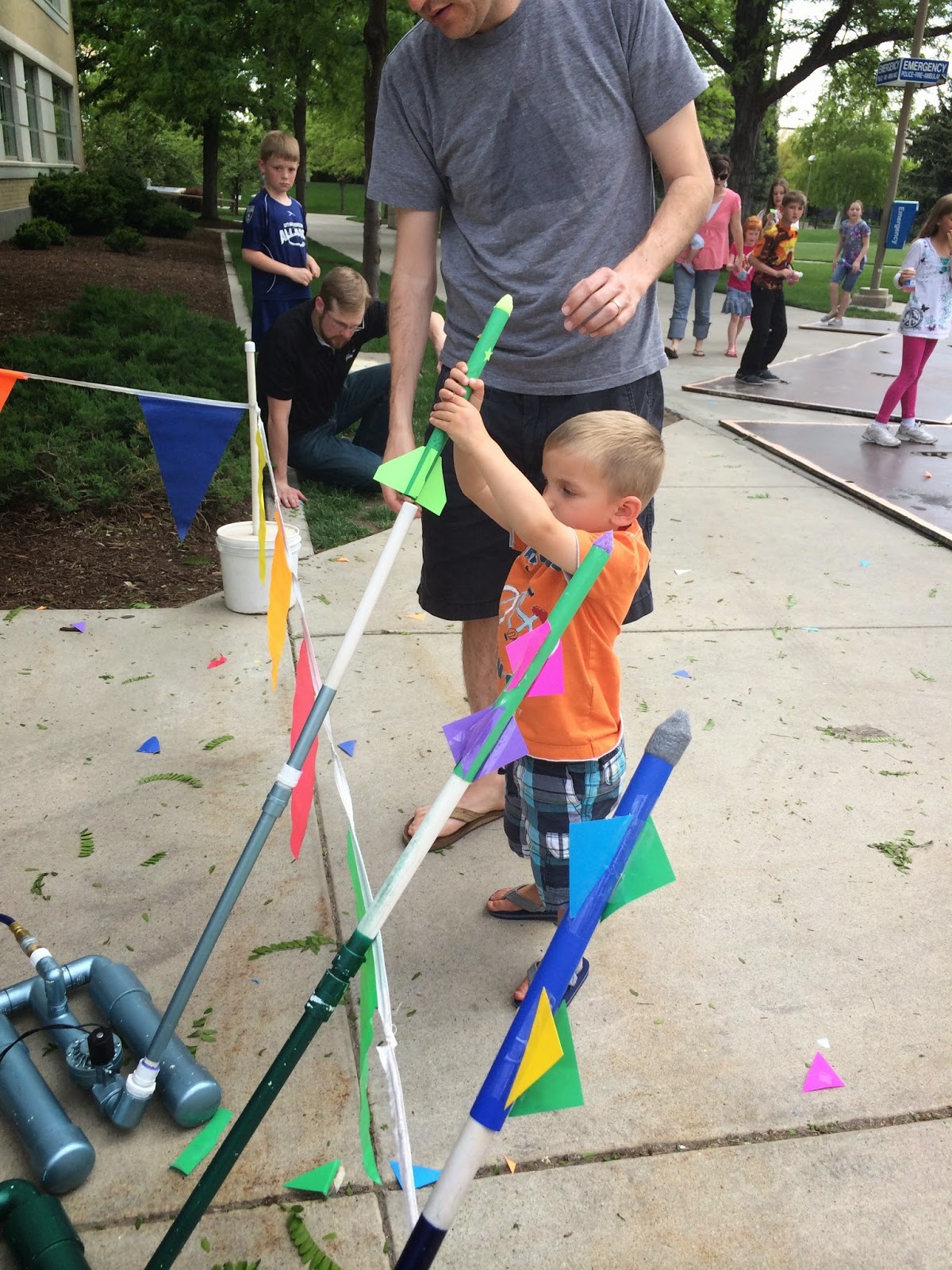 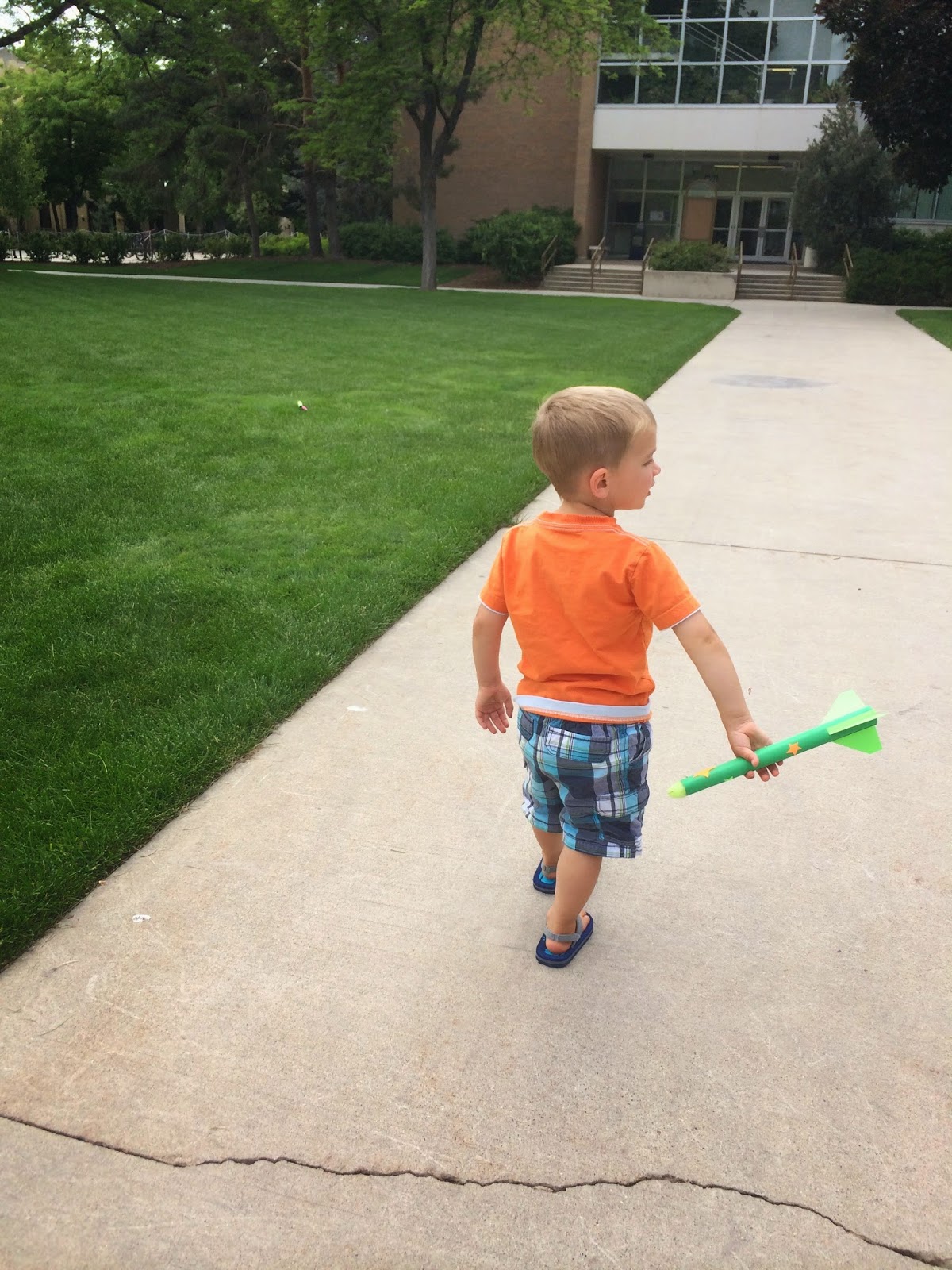 And last - the trooper who did.not.sleep despite appearing very sleepy. 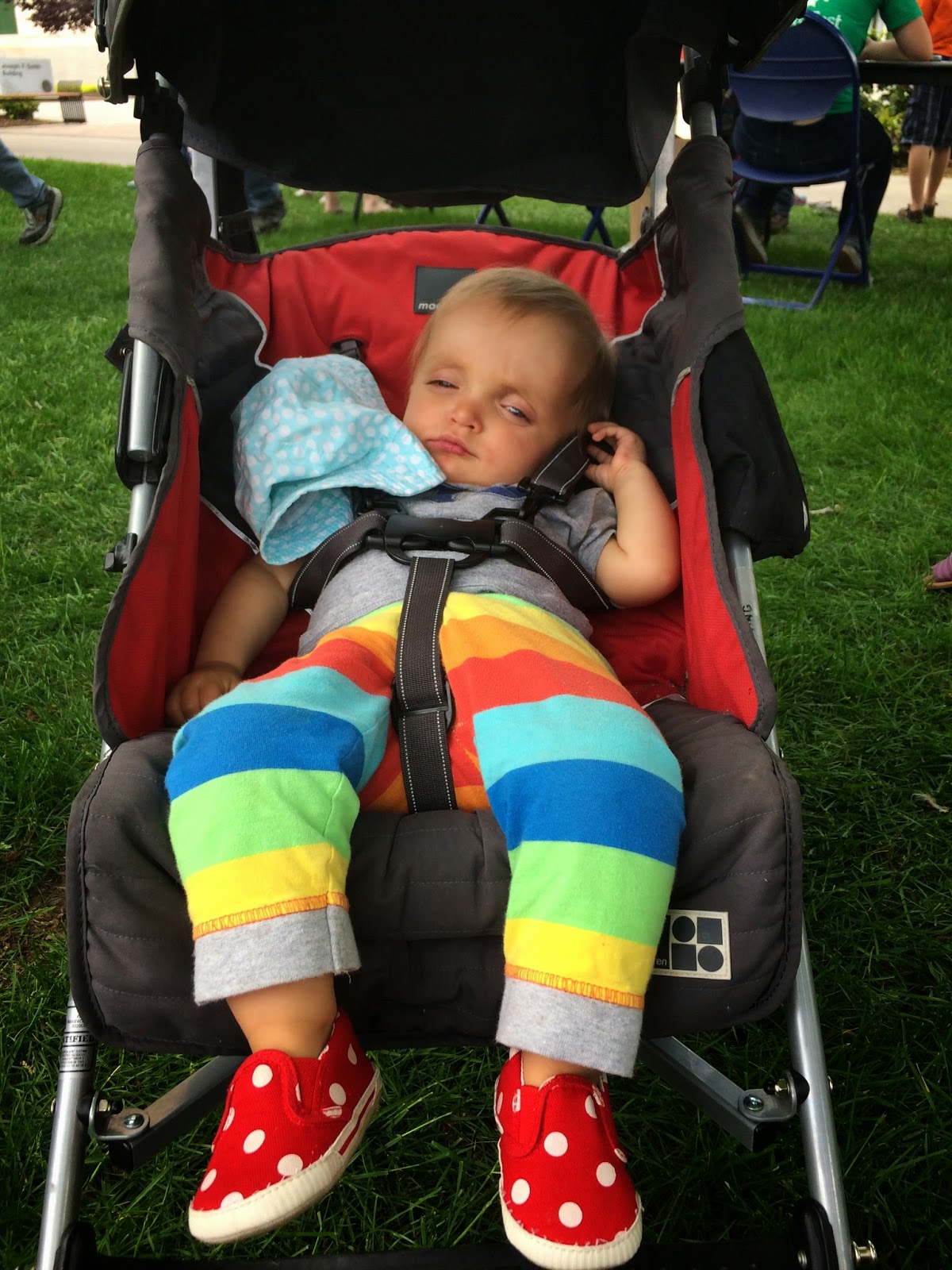 Posted by stephanie at 9:43 PM No comments:

It turns out that a really smart way to get some gift certificates to restaurants you want to eat at is to put them on your bucket list and then blog about that list :)

For Mother's Day Rob's parents gave me a gift certificate to Black Sheep Cafe. Happy Mother's Day to me! Here is my handsome date, button-down shirt and all. 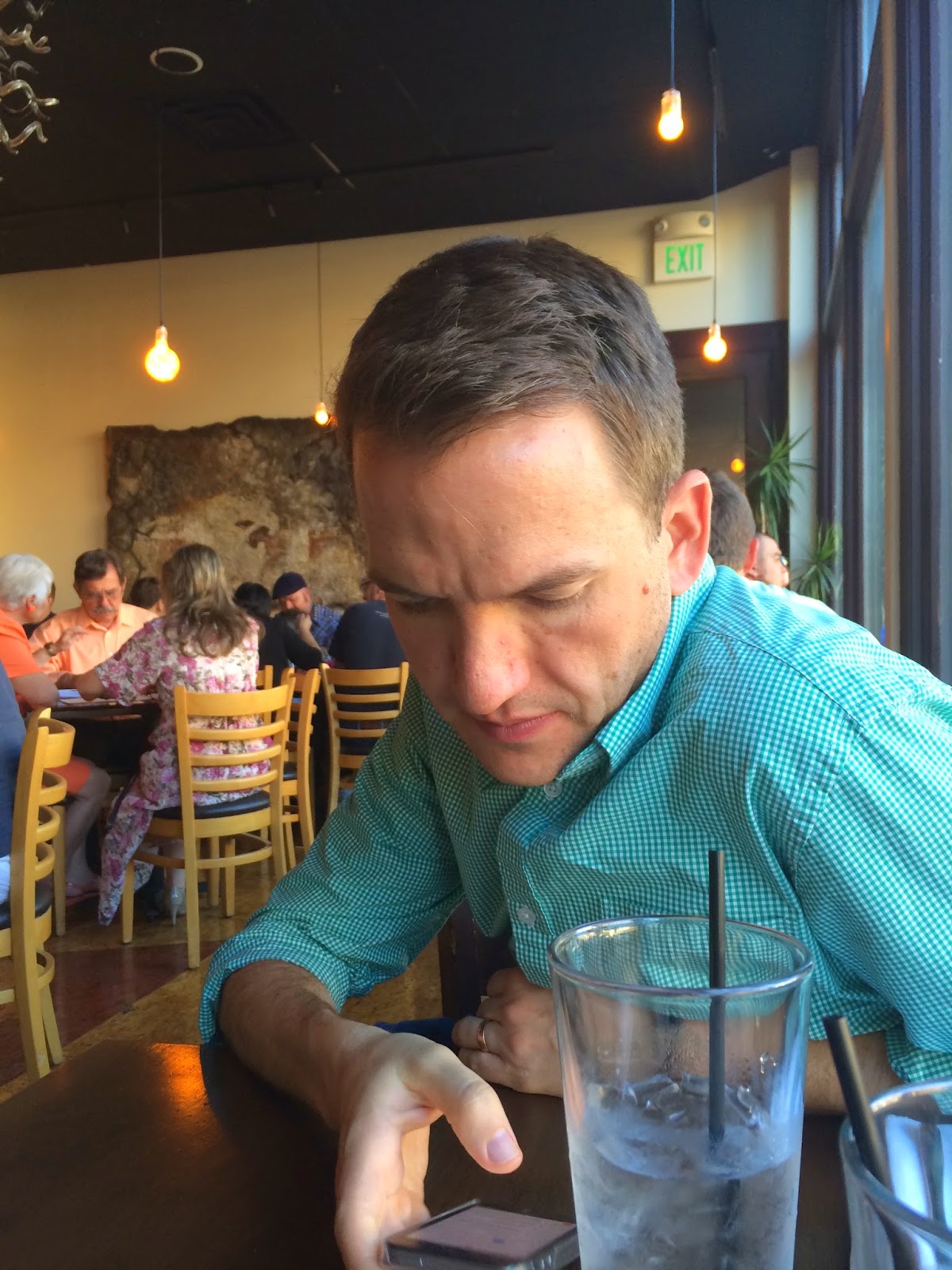 Don't get mad at him for being on his phone while on a date - it took about five years for our food to come, so there was some time in between the romantic talk. It was fine that the food took so long, we had planned that our friend would put the baby to bed (that was huge for me - someone besides us putting her to bed! Luckily my friend, Lindsay, is as capable as we are at such things. Oh, we also left her with a half-potty-trained three year old). However, had we planned on this date lasting as short as they usually do (because of said baby) then I would have been stressed about the wait!

The wait was also made better because of this awesome prickly pear lemonade. Truth: after I saw the menu I was less than enthused to be eating here. We realized the items we had intended to order, because of Yelp and friend reviews, were only served at lunch. We even thought about leaving, but we ordered. Then came our prickly pear lemonade we ordered. I thought we'd get one glass but instead it comes in this bottle... lots of glasses worth (and pretty and delicious)? Okay, my attitude totally changed. Do you agree that this is exciting? 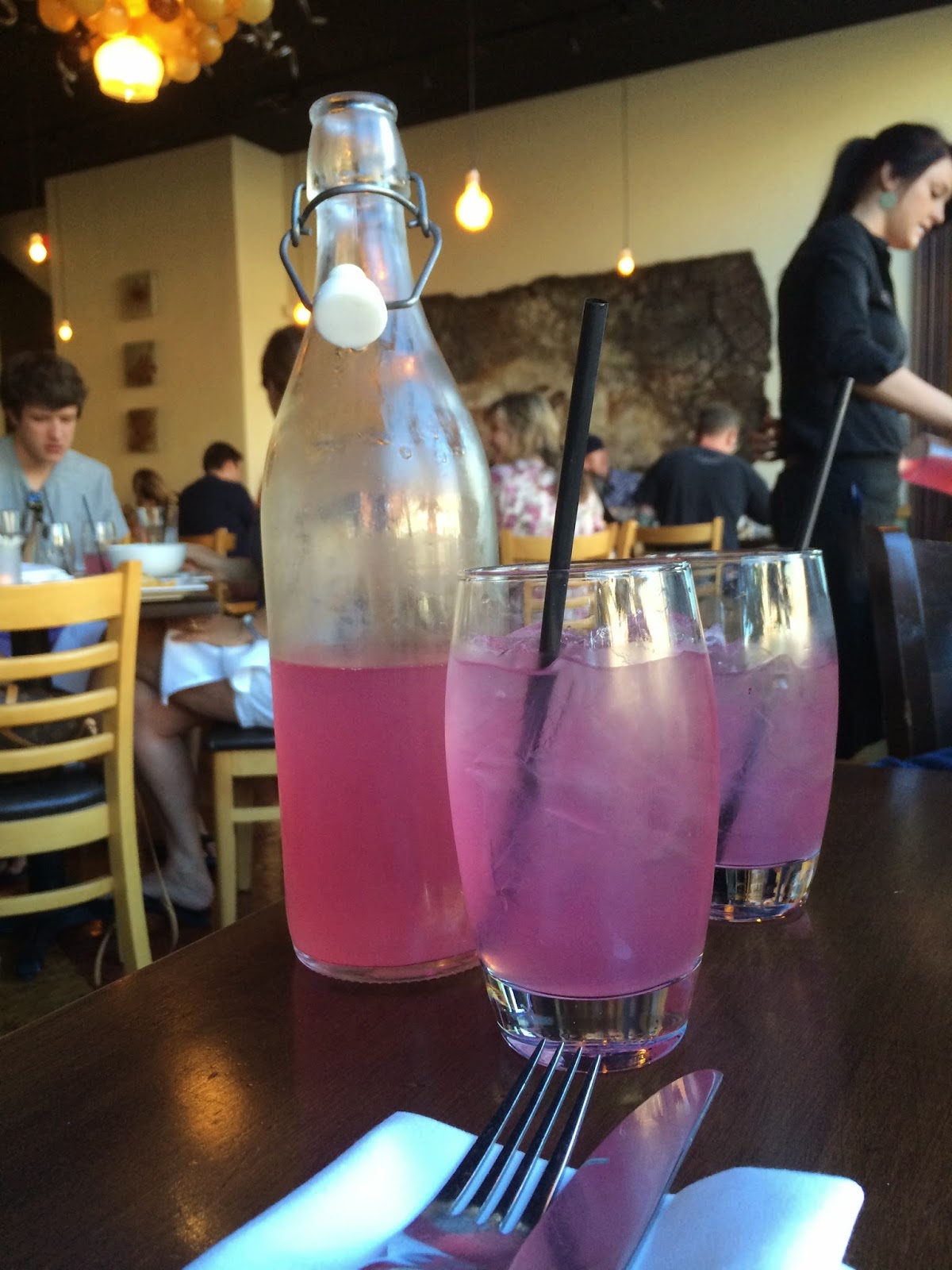 Our food that ended up being really really good. I got the red beef navajo taco with street corn (meh) and beans on the side (I was so not in the mood for beans but they were good good). Rob got the green chili stew. Great flavors, another one that I thought I wasn't in the mood for, but ended up totally enjoying bites of. Oh, we also had a great seat by the window and in the corner of the restaurant. I'm super picky about where I sit. I don't ever speak up about it, but it helps me enjoy/not enjoy a dining-out experience. 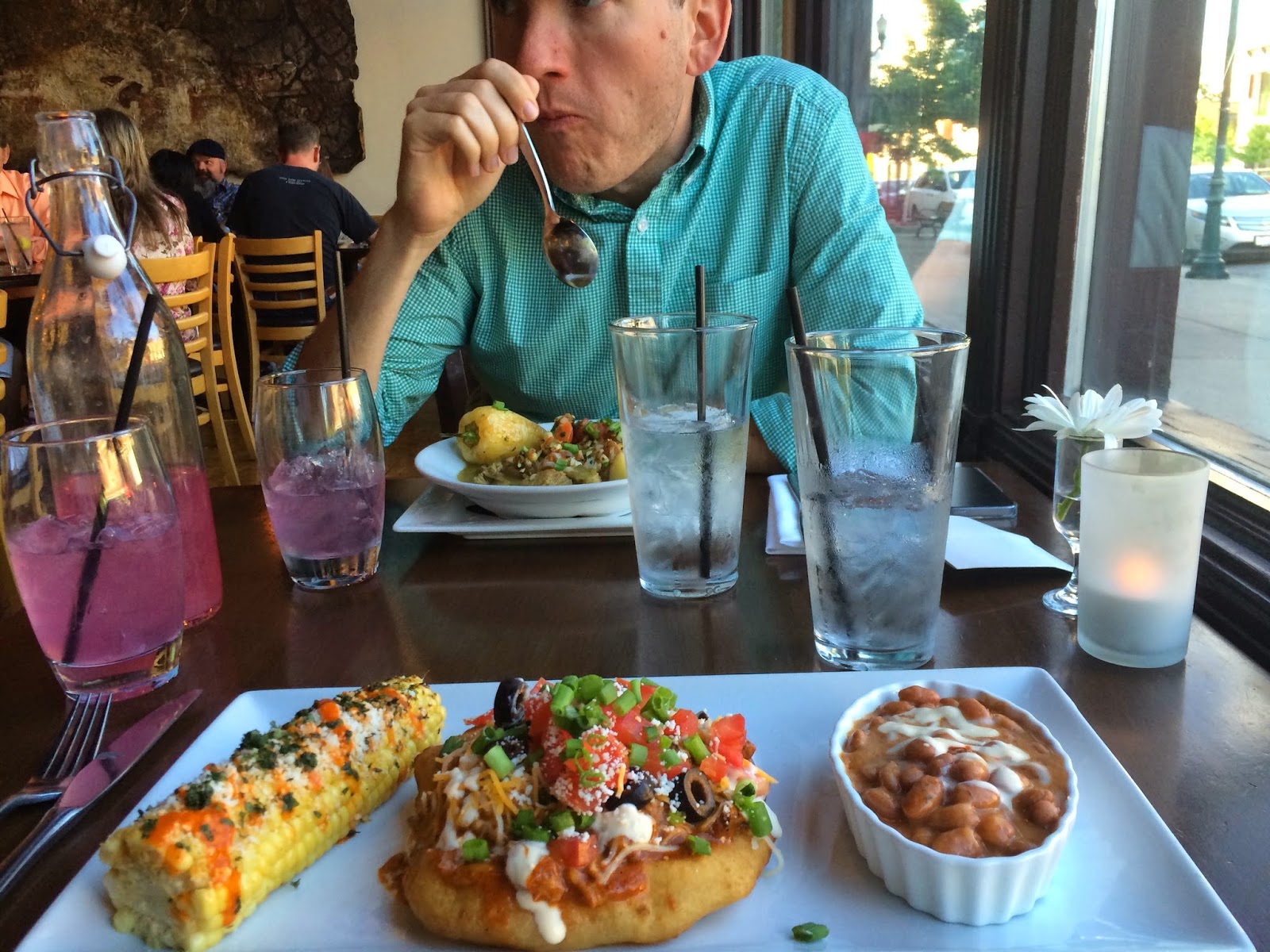 Another shot of my date. 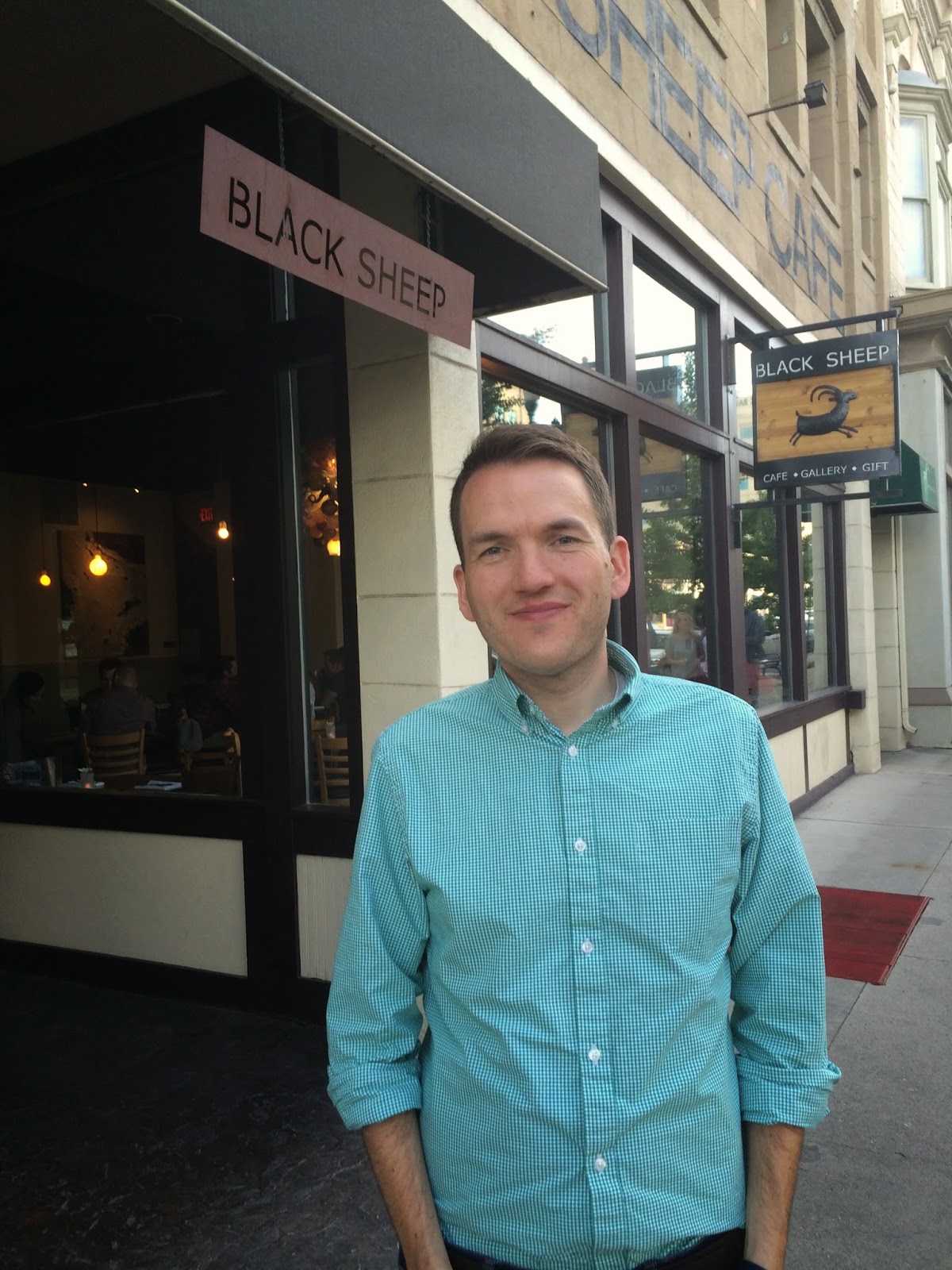 Thanks for making this date possible, Jerry and Linda! I still have enough left over on the gift certificate... I might even go with girlfriends instead of Rob. It was MY gift after all :)
Posted by stephanie at 9:01 PM No comments: