Here I am at, I think, 27 weeks. I'm 30 weeks now - less than 3 months to go. By the way, my midwife group is now using April 28th as my estimated due date, instead of May 1st (it moved up after my 20 wk ultrasound). 3 days doesn't make all much difference, but I guess I should start considering that date since it's the one I'll be early/on-time/late against. 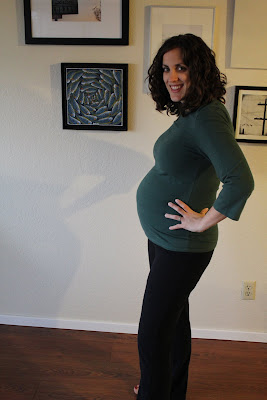 I chose this picture because my legs look skinny - but I promise that not all the weight gain is restricted to my belly, nor can it all be blamed on a growing baby (the sweets, large portions, and too many carbs share that blame). A lot of days I'm glad that I can show my belly in all it's glory, since it's always been my "trouble" spot that I tried to hide.

When I first got pregnant I tried reading a handful of pregnancy books, but it seemed like the majority of the content was dedicated to complaining about or explaining the hormonal changes. And I didn't have any. I know, I'm lucky, and I also know my luck might not carry through future pregnancies. There are a few, though, that I've only recently experienced or recently identified as, "yeah, I guess I have had pregnancy symptoms." For some reason I feel compelled to record them here, most of them have just appeared in the last couple of months:

- allergies. Thank goodness this only lasted a few months, ending a few months ago. My midwife group confirmed that, yes, my insane allergy symptoms were probably due to my pregnancy. It was miserable, but left me pretty amazed at the allergens my body had been fighting all along, before it got too busy growing a baby.
- bloody noses. When I read about this symptom I assumed it meant a "running" bloody nose, but instead I just always have dried blood in my nose, and bloody tissue when I blow my nose. Sorry, that's gross.
- heart burn. Mild, though, and not recently. I've tried to cut down on drinking caffeinated soda so maybe that helped, but it's not like I drank much before so I don't know.
- Braxton-Hicks contractions. I wish someone would have told me sooner that these feel like menstrual cramps, then I would have understood what was happening and been less concerned early on. And I did feel them early on, earlier than what most women I've talked to experienced. They've ranged from mild (since about month 4) to a couple of times when they were pretty intense.
- a growing bosom. And I didn't need that.
- fatigue. I doubt there's anyone that doesn't feel ultra tired at different points in the pregnancy. The fatigue has definitely returned in my third trimester. I'm not someone who easily takes a nap, so the fact that I have intense longings to lay down and sleep means that I'm crazy-tired. Also, I get more tired after working out, when pre-pregnancy working out invigorated me.
- edema in the feet and ankles. this is recent, just in the last couple of weeks. I'm nervous to see how far it's going to go. It doesn't seem to be indicating pre-eclampsia.
- curly hair. Actually, I don't know if that's due to the pregnancy. I've heard it's common for hair to go curly or straight, but I guess it's just as likely that my curlier hair these days is due to a recent haircut:)

My favorite thing is feeling the baby move. Who doesn't love this? It really is fun to be reminded of his existence all throughout the day. He's recently begun kicking me in places that hurt - I pretend it's my kidney but I have no idea. Last night, for the first time, I felt one of his body parts on a part of my belly - not a kick, but a body part just sitting there near the surface. It freaked me out because I didn't know if it was a foot, an elbow, his head, or what and so I felt weird about pressing down on it, so I turned on my side so he'd change positions.

Anyway, that's my pregnancy to-date. It's been fun. We're anxious for his arrival but trying to, instead, relish in this time we have with just the two of us.
Posted by stephanie at 7:10 PM 6 comments: