How Henry does Sunday mornings

After leaving the bedroom he played in the living room with his toy "car." We're borrowing this from our friends and he. loves. it. He thinks he's pretty cool as he walks behind the car, stopping every once in a while to service his vehicle - checking the tires, etc. Since practicing with the car, he also likes to push chairs around the wood floor, his stroller around stores, etc. Give him something he can push, and he's happy. I just love seeing his little legs working so hard. 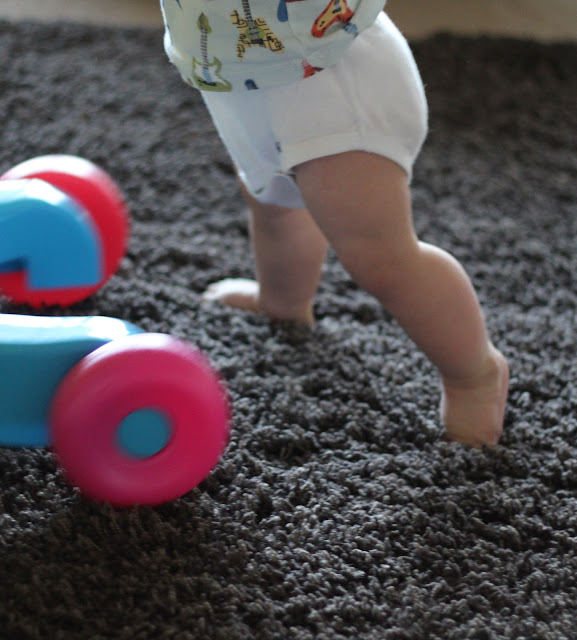 Soon he was on to some other toys. 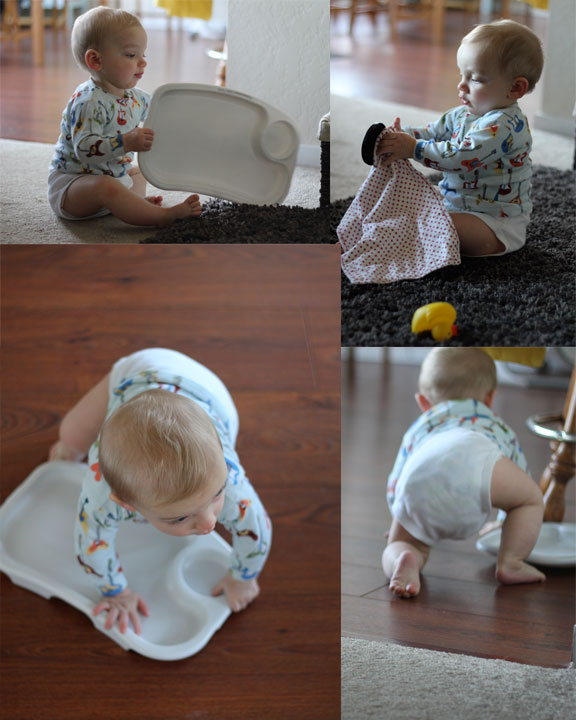 His interest and focus is so fun to witness. 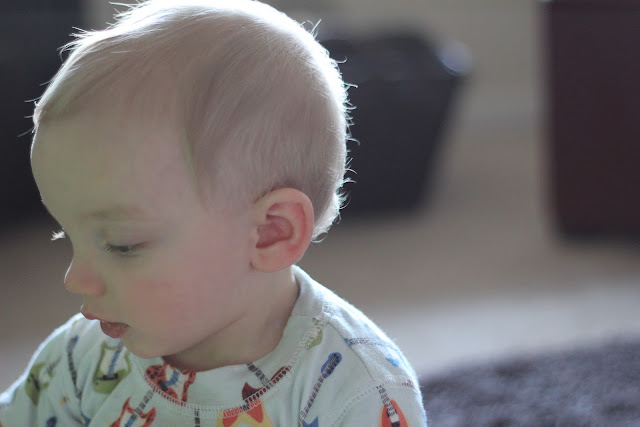 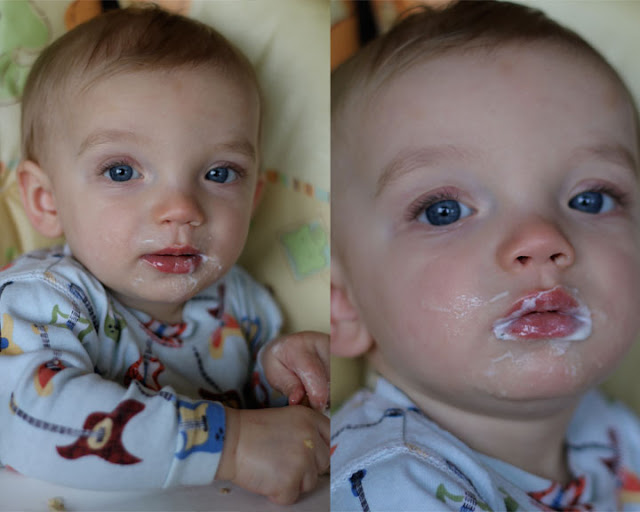 And bath. Who doesn't love a wet, naked baby!? 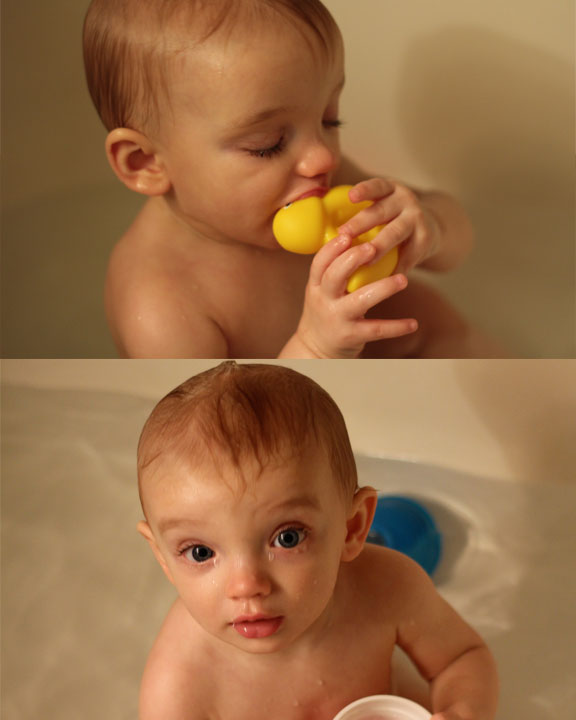 And now Baby is ready for church (well, ready for a nap. We wake him right before leaving for church.). 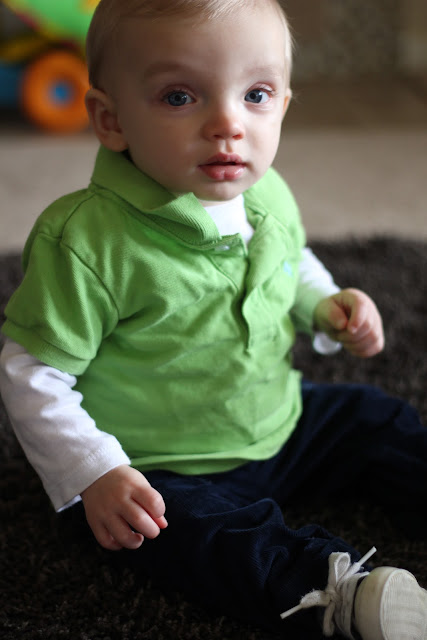 But not before checking on the birds outside the window. 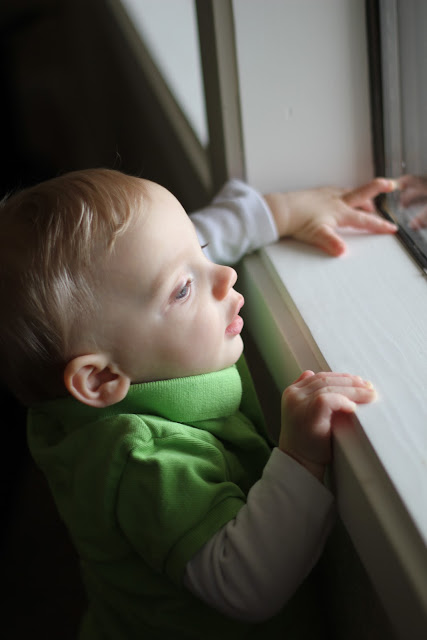 Playing in the morning.

We spend a long time in the morning in our bed. Rob brings Henry into our bed when he wakes up sometime between 5-6:30. He nurses and usually falls back asleep, then we all wake up together around 7am. Then, we just hang out there in bed. This started when Henry was spitting up a lot after I'd nurse him, so I'd want to keep him on my lap rather than be moving around and spitting up over everything. But now, it's just fun for us to hang out and play in bed.

These pictures are from a lazy Sunday morning when we played some ball with Henry in our bed for a while. He's just so fun and cute that I had to share/document. These pictures are a month old and I feel like Baby has already changed so much! 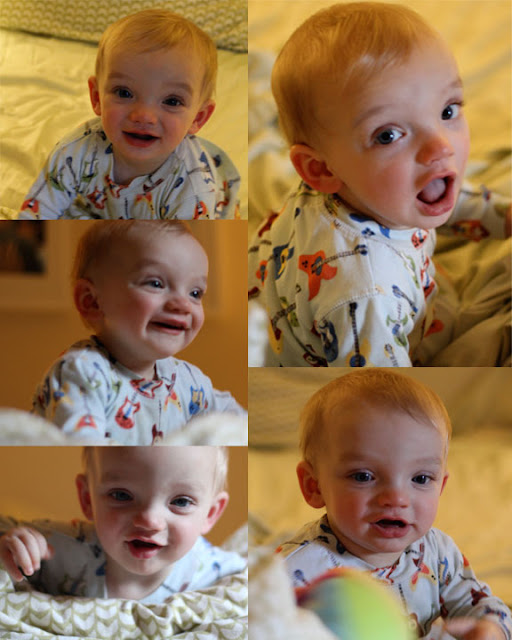 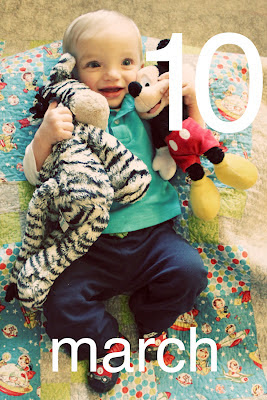 Ten months old! It feels like he just turned 9 months old last week! It's difficult to think of some things that are different since then... but here are some:

- Henry gives kisses. Mostly to mom and sometimes to Dad (when his beard isn't too scratchy).

- Henry is very stable when standing against objects and rarely falls down. He gets up on his knees now and has begun to walk behind a toy that he's pushing (which he seems to be pretty proud of) and walk along furniture. Wow - I just read the post from month 9 and was reminded that he was still scooting then! Over the last month he has scooted less and crawled more every week until now - he's crawling 100% of the time. And he's really good at it. What is "good?" Well, I don't know, but he's super fast and looks like he's been crawling forever!

- Nap duration has gone back up! 1.5 hours is the average. So nice for mom!

- Favorite activity is pulling items out of boxes or baskets. I love it. When I'm working on dinner I give him a box of wrapped granola bars to take out one-by-one and play with. When I'm getting ready in the morning I give him my basket of scarves to pull out and play with. He can sit and play with his dirty laundry (hmm. that sounds bad) for ten minutes.

- It's becoming apparent that he has some receptive (understanding) language. He knows "give me a kiss" and maybe even distinguishes between giving mom/dad a kiss. He knows to look for something when you start with "where?" Especially, "Where's daddy?" He might know "dog" and "drink." - it's my speech pathology background that doesn't let me believe he knows something until it's pretty obvious (80% occurrence rate for mastery... SLP joke). No expressive language - occasionally he'll mimic the tones of something we say and inconsistently clicks his tongue when he wants a drink (we know his meaning for various grunts, groans and squawks, but that hardly counts as expressive language).

-  Henry has become a little wary of water. He fell at the pool when we went swimming a couple of weeks ago and didn't want to get in the water after that (we're assuming the fall and the apprehension about the water are connected). We went swimming again last week and he took a while to get used to it. He has been the same with his bath. We want to balance ignoring his apprehension along with not pressuring him and hope that this little fear goes away in the next couple of months (we're going back to Hawaii at the end of the summer where we'll want to be in the pool or ocean all day long!).

- He is becoming quite the handful at church! Sitting in a worship service for an hour and 15 minutes every Sunday is hardly age-appropriate, but he seems like an extra wiggly baby. It doesn't give us any comfort for an 11 hour flight we have coming up in a few months!

- Henry's cousin, Xander, used to get in all the trouble for roughhousing with Henry, but we've begun to see that Henry usually has just as much to blame for being knocked over or pushed away. He's often taking toys away from Xander, stealing his water cup, or just plain bugging him.