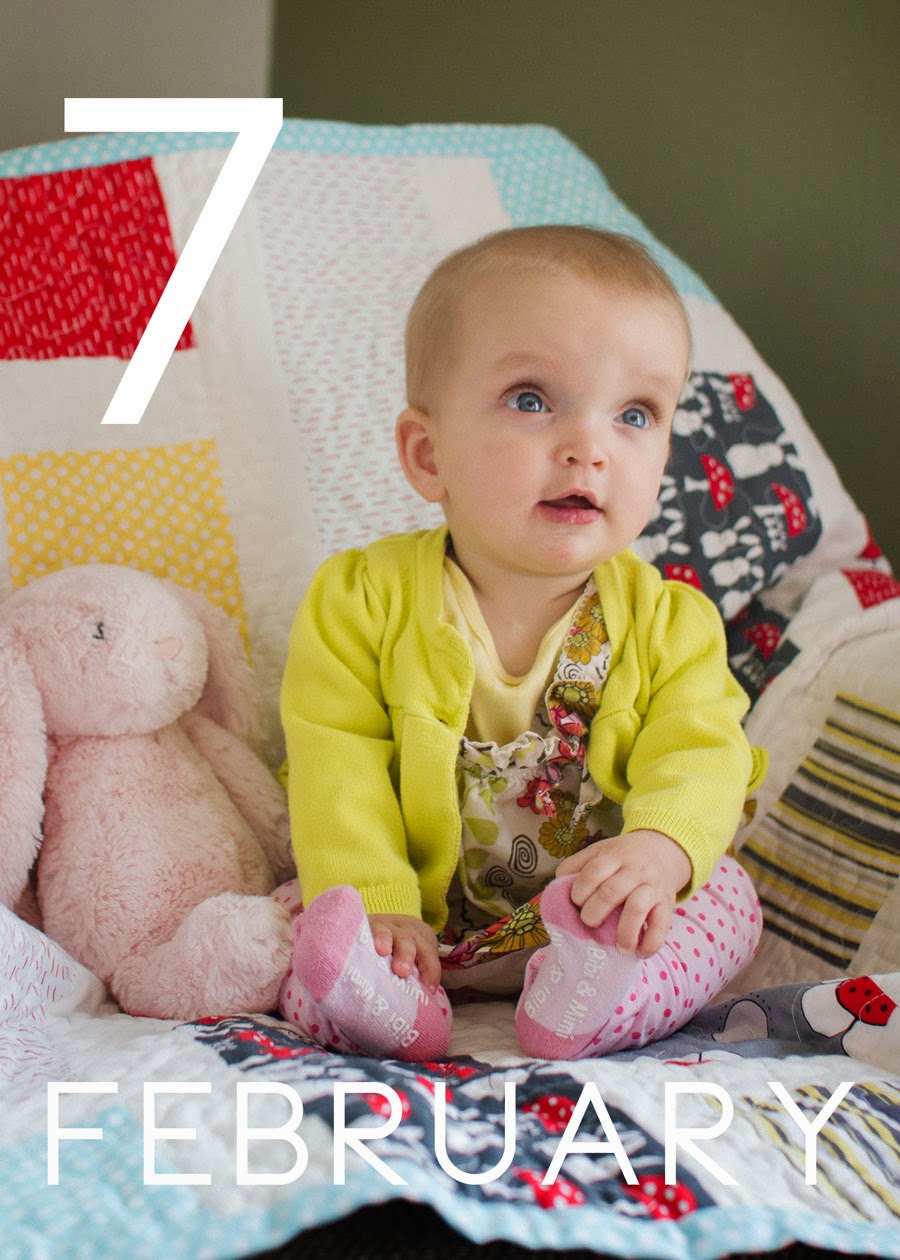 Look at our baby! Isn't she cute!?

At seven months June is now eating solids. We started just a few weeks ago and she's a fan. I planned on doing strictly Baby Led Weaning but we had some issues with June gaining weight so I switched things up, spoon feeding her purees so I could have more control over what got in her mouth (rather than letting her practice with foods and most of it ending up on her lap. Her first bites of purees were not as successful as her first bites of finger-foods (as baby led weaning dictated we give her) but our girl is flexible and will take both textures.

I mentioned issues gaining weight. I don't know how big of a problem it really was, but at her sixth month check-up she hadn't showed the expected growth since her four month visit so we were told to supplement my nursing with formula then come back in two weeks. Two weeks later she actually had lost little (.2 ounces) so I was again told to supplement her and come back in one week. June pretty much hated the formula and I could only get her to drink a couple ounces a day at most, and that was only through a medicine syringe since she wouldn't suck on a bottle with formula milk. When we came back she had gained three ounces, so we're not worrying about it anymore.

She has begun to talk a little. Her "screaming" talking has been replaced by "dadada" and today I heard "bababa." Let me tell you, she has got the sweetest little voice, we love hearing it. Her other tricks are still blowing raspberries and her latest is shaking her head "no" to be funny.

No new gross motor milestones since last month except that she is now a total expert at sitting. She'll sit forever and it's her preferred position. She can reach all around her and lean way forward, all without losing her balance and falling over. She has even taken her first couple rides in the seat of a shopping cart!

To my surprise, June has demonstrated some stranger/separation anxiety. This was the age Henry started too but I guess I didn't think my social butterfly of a girl would experience it. She isn't quite her fun smiley self with strangers (well, anyone besides our family) now and has cried a few times when being held by someone else. She even will cry when looked at if she's tired. Our friend Lindsay babysat for us a couple weeks ago and June was not the happy camper she has been with babysitters up to this point. Dang it! We just got back from spending a long weekend with Rob's parents in Las Vegas. Even though she doesn't see them very much at all she was pretty fun with them and they got to see all her tricks. There were a couple times in the condo with just G'ma and G'pa when she realized that all her family was gone and she got a little teary.

The trip included a 6 hour drive each way and June was great. On the way there she was starting to lose it with one hour still to go but was pacified by a light show app on my phone:) On the way back home she took a nap right when we started, was happy while she was awake, then fell asleep again when it was her normal bedtime. Thank goodness because it was an extra long trip due to some unexpected traffic and she would have been furious if she was awake!

She has been a total trooper with recent sleep training efforts we've made. I've procrastinated getting her to reduce her night-wakings/feedings because I know this girl can be a marathon crier. But, one night we just decided to go for it and not get her when she woke a few hours after her first feeding. She ended up crying for TWO hours (more like 2 1/2 or more, but I'd prefer to remember it as two). But since that night over a week ago she only wakes up once, around 4-5 am for one feeding. So, I guess that's her training mode: one really bad night and then that's it.

So that's our seven-month old. Seven months feels so old - on the way to one year! Crazy.
Posted by Rob at 8:16 PM No comments: